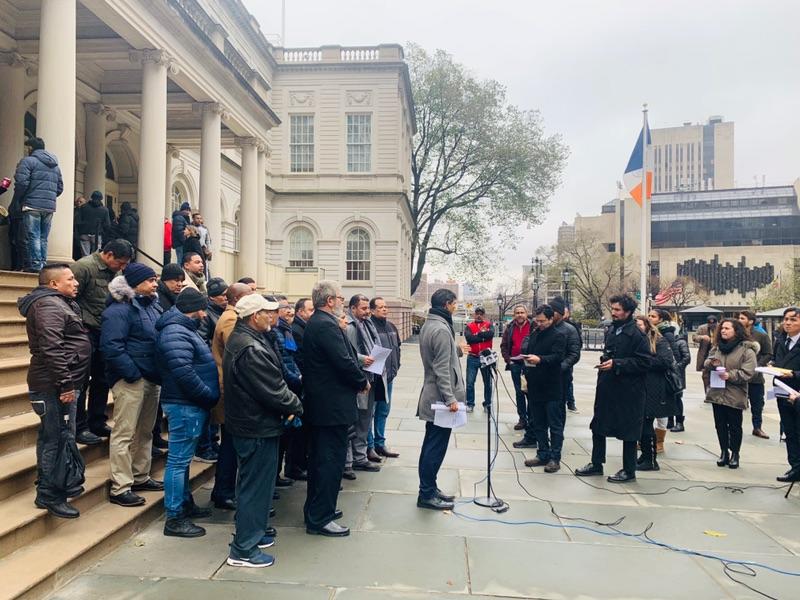 to call on the Taxi and Limousine Commission (TLC) to address the issues impacting Livery and Corporate Black Cars. The Committee on Transportation heard from TLC Chairman Bill Heinzen, the Livery Base Owners Association, drivers, base owners, and advocates today.

For many years, the small businesses of the livery industry have provided work for many working-class immigrant New Yorkers looking to achieve the American dream. In the past five years, the number of licensed livery vehicles operating in the City has declined by over 50% and livery base services have been impacted the most, with bases completing about half as many trips per day as they did in 2014.

The City went from having 50,000 livery vehicles in 2014 to less than 10,000 in the current year. The sector lost over 40 thousand livery vehicles due to predatory practices of the high-volume for-hire-vehicle services, combined with the City’s unfair and ineffective efforts to regulate for-hire vehicles in the new millennium, and the industry’s inability to replace drivers lost to common causes, due to the licensing caps.

The crisis is destroying one of NYC’s most iconic industries –potentially putting thousands of people out of work, causing havoc for passengers in underserved neighborhoods and causing major suffering to workers, families and local entrepreneurs whose futures and livelihoods are at risk. There are a few hundred livery bases across the City, mainly in underserved, transportation desert areas like Northern Manhattan, the Bronx, Brooklyn, Queens, and Staten Island. Today we will call on the TLC and the City Council to ensure that for-hire vehicle regulations and policies are fair, and help to level the field for all providers.

“It is important that we look at all these sectors individually to be able to come up with a solution to the issue rather than simply trying to solve the issue with a one size fits all solution, as we have seen,” said Council Member Ydanis Rodriguez, Chairman of the Transportation Committee, “We went from having 50,000 Livery vehicles in 2014 to less than 10,000 in 2019. We have lost more than 40 thousand livery cars since 2014. Many of the drivers and owners of livery bases and the drivers of Corporate Black Car services are working class immigrants. Taxi services that once were booming are now seeing sharp declines in ridership in astronomical numbers, making this way of making a living unsustainable.”

José Altamirano, president of the Livery Base Owners Association, said “Our industry urgently needs the support and protection of the City and its authorities. In recent years we have seen how for-hire vehicle policy-making has turned and centered on benefiting high-volume for-hire vehicle service providers, while we, the small local bases are being pushed against the corner and put on a path toward disappearance. The livery taxi industry has served NYC for over half a century and throughout the years we have complied with every step, followed every rule, and fulfilled our mandate to serve areas with limited transportation resources and infrastructure. We have been and still remain a pillar in the City’s for-hire transportation alternatives, and we need immediate intervention before it’s too late.”

Cira Angeles, spokesperson of the Livery Base Owners Association, said “The City has been disingenuous in its effort to counteract high-volume for-hire vehicle services such as Uber, Lyft and the likes, and it has failed to recognize that there is a different system of for-hire vehicles, created by the City itself decades ago. The for-hire vehicle licensing cap was a blanket-policy approach that dismissed that fact, and in the process, also dismissed the needs of vulnerable New Yorkers who rely on our service in areas where yellow taxis don’t go, mass transit is inefficient and transportation alternatives are limited. Let’s stop the myth that livery and black car drivers affiliated to bases contribute to traffic congestion in Midtown and Lower Manhattan. Our industry was created by the City itself, to serve particular geography of the five boroughs that needs us to keep moving. That’s why we must ensure that any policies regarding for-hire vehicles take that into account, and that City authorities understand who we are, what we do, and what’s our role within the NYC’s overall for-hire vehicle landscape.”