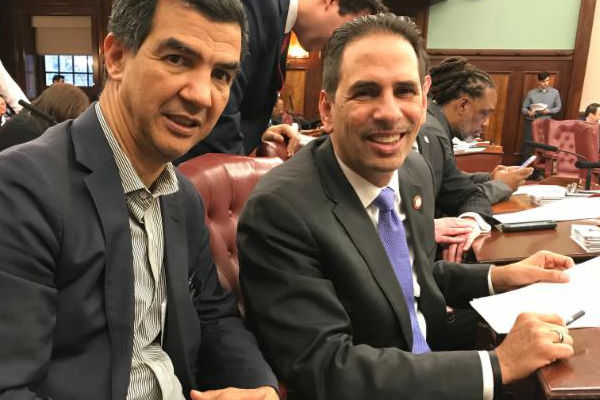 Today, Uptown Council Member Ydanis Rodriguez, joined by Council Member Fernando Cabrera and advocates, held a press conference on the steps at City Hall to call for an increase in diversity in leadership positions within city government agencies and departments. Even though some progress has been made, we still continue with a lack of equal representation when it comes to roles in City leadership. Uptown Council Member Rodriguez proposed to expand on the new law establishing the Office of Diversity & Inclusion and solutions to improve our diversity to accurately reflect our City’s demographics and take into account gender, religious and ethnic backgrounds.

According to data compiled by the Center for Puerto Rican Studies, in 2015, New York City government employees were comprised of 39% White, 31% Black, 20% Latino, and 9% Asian.

According to data compiled by the Center for Puerto Rican Studies, in 2015, New York City government employees were comprised of 39% White, 31% Black, 20% Latino, and 9% Asian. Uptown Council Member Rodriguez also called for the City to implement a Targeted Recruitment Approach, a policy that is currently implemented in Higher Education to address lack of diversity and under-representation.

“By furthering the efforts of the Office of Diversity & Inclusion, we will be able to recruit and retain city employees that represent the diversity of our City. The City of New York is one of the most diverse places in the world yet we have a lot of talent that is going unnoticed. The City has to diversify its agency and department leadership roles to include minority communities and in doing so, further the opportunities of long disenfranchised communities and create paths to their economic and social advancement,” said Uptown Council Member Ydanis Rodriguez, Co-Chair of the Black, Latino & Asian Caucus.

“Although the City has taken some steps to improve the diversity of the leadership roles among agencies, we still believe that we can push for more to close the gap. NYC is one the most diverse cities in the country and likewise, we should reflect this notion in our leadership positions. Diversity promotes an equitable consensus to decision making understanding the different needs of many ethnic groups for better representation,” said Assemblywoman Carmen De La Rosa.

“People think of New York as a progressive city but the demographics of New York City agency leadership staff are not progressive. We need staff leadership in agencies that better reflect the populations they serve. I’m standing with my colleagues today to call for a chief diversity officer in every agency so we can ensure fairness and have accountability,” said Council Member Fernando Cabrera.