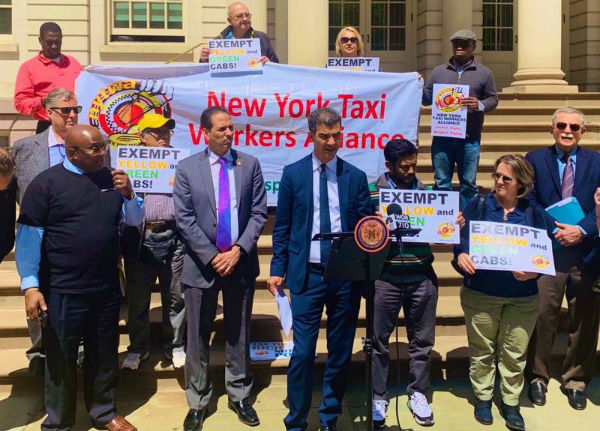 The Taxi industry has been beset by a financial crisis that has seen the price of medallions and ridership numbers plummet. Congestion pricing will only exacerbate the difficulties of already struggling taxi drivers. The Council Member is proposing that the current surcharge be revolved and that the taxi drivers be exempt from the 2021 congestion pricing

In February, Yellow taxis and other ride-hailing apps received fees that will be applied to the customer’s bill for riding in and around any area below 96th street. The surcharge is $2.50 for yellow cab drivers, $2.75 for the For-Hire vehicles, and a 75-cent fee for shared pool rides. Since the congestion pricing went into effect, there has been a 15-20 percent loss in revenue for the taxi drivers. We also saw a decrease in over 50% of riders that took Yellow taxis in the City of New York since 2014. The surcharge proposed by the governor would be the third surcharge the taxis would see (that’s including the 50-cent surcharge the MTA placed in 2011). The Council Member will continue to work alongside Speaker Corey Johnson, Council colleagues, and advocates to ensure that a comprehensive plan is worked out to help the struggling taxi drivers

“Our Taxi Drivers are currently facing a financial epidemic unlike any other we’ve ever seen. Our drivers, many of whom are immigrants, are suffering from the already imposed congestion pricing that went into effect in February. This fee has caused taxi drivers to see a decrease in the amount of revenue they make as well as the amount of rides they give,” said Council Member Ydanis Rodriguez, Chairman of the Transportation Committee. “We have a moral obligation to call for an exemption on the taxi drivers from the current surcharge as well as the one to come. As the Chairman of the Committee on Transportation, I will be working alongside speaker Corey Johnson, Colleagues and advocates to ensure that we come up with a plan to help our struggling taxi drivers.”

“Per-trip, pass-thru surcharges are onerous on riders that rely on taxis for basic needs every day and on drivers already suffering from the onslaught of app-based for-hire vehicles,” said Manhattan Borough President Gale A. Brewer. “I’ve heard too many complaints from seniors taking trips to the doctor and parents dropping off or picking up kids at school-let alone drivers trying to make an adequate living to be able to defend a per-trip congestion fee for yellow cabs.”

“While we fight for loan restructuring and debt forgiveness for owner-drivers locked into predatory medallion mortgages, yellow and green taxi drivers need immediate relief from the $2.50 congestion surcharge in effect since February 2019, as well as from any future surcharge imposed on yellow and green cabs traveling 60th street and below as part of comprehensive congestion pricing set to go into effect in 2021,” said Bhairavi Desai NYTWA Executive Director. “Without an exemption from the congestion surcharge, taxi drivers — whether they are lease drivers or owner-drivers — simply won’t earn enough to survive, even if their expenses go down. We applaud City Council Transportation Committee Chair Ydanis Rodriguez for joining our call to exempt taxis from the devastating congestion surcharge.”