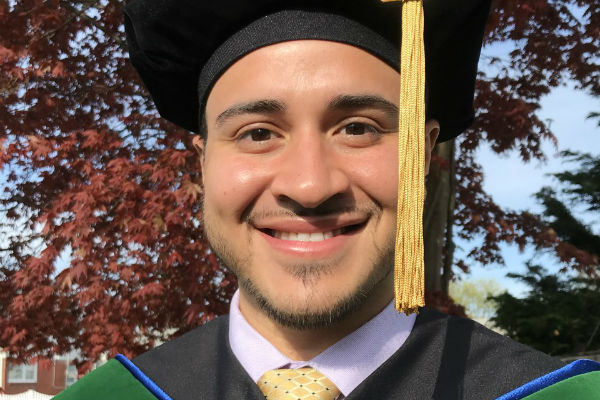 Touro College of Osteopathic Medicine (TouroCOM) Harlem held a virtual commencement ceremony Thursday for 139 graduates, 97 of whom technically graduated early. In the environment of a global pandemic, many were eager to volunteer their services or start their residencies ahead of the usual time.

This year, the traditional applause, musical entertainment, and buzz that extended from the orchestra section of Harlem’s Apollo Theater up to the balconies was replaced by small gatherings with family and friends around computer screens or phones. Graduates tuned in from all over to listen to congratulatory remarks and words of encouragement, take the Osteopathic Oath, and view slides highlighting their individual accomplishments alongside photos in commencement regalia adjacent baby pictures. Friends, family, and faculty sent over 250 congratulatory messages through a live chat box during the one-hour ceremony.

Following an eloquent invocation by Touro College and University System (TCUS) Executive Vice President Rabbi Moshe D. Krupka, TouroCOM Dean David Forstein, DO address the class of 2020. They were the first students he met when he joined TouroCOM in 2017.

“As I have told you many times, your class is very special to me and I couldn’t be prouder of your accomplishments,” he began. “All of you will be on the front line of dealing with a changed environment, a medical crisis. Your altruism, bravery and resilience will be tested. If you have never felt heroic in your life, you are about to.”

The challenges facing the new graduates from the coronavirus was touched on in remarks by nearly all speakers – from the students’ volunteer work since the crisis began to the tasks confronting them at residency.

TCUS President Dr. Alan Kadish told the graduates that they made a good choice by coming to TouroCOM because the school has positioned them to repair the world – in Hebrew “Tikkun olam”, a concept in Judaism and other denominations to make the world a better place.

“For the rest of your lives you have an opportunity to be healers in a society that truly needs healing. Never has this been more true than today, in the midst of a worldwide health crisis,” the President said.

He offered a historical perspective on the current pandemic. “As tragic as coronavirus has been, we are better equipped today to deal with it than we would have been in the past,” he said. “Ventilators can bridge the worst of disease for many patients. Testing – although far from perfect – can define its epidemiology, and drugs that have at least some emerging efficacy are and will be developed. Vaccines, I hope, will come sooner rather than later.”

TCUS Provost Patricia E. Salkin, JD, commended the graduates for completing their studies early to help combat COVID-19. TouroCOM’s mission to “serve the underserved” was fulfilled through their support of Harlem residents and others throughout the boroughs, she observed. “You have already lived this mission in so many ways. We hope you will practice medicine for at least part of your career in underserved communities.”

All TouroCOM students were removed from clinical rotations on March 13, due to safety concerns. “The class of 2020 rallied, pulled together and volunteered to help fight the pandemic,” observed Executive Dean Kenneth J. Steier, DO, noting their hard work led to graduation for many six weeks ahead of schedule – an “amazing effort”.

The class of 2020 received an official welcome to the profession from keynote speaker Kevin Klauer, DO, CEO of the American Osteopathic Association. Dr. Klauer urged the graduates to embrace what makes them distinctive as osteopathic physicians, but to avoid aiming for perfection.

“Establish your professional identity early. Decide who you want to be and how you want to make a difference. Once you have set your compass, navigate towards success,” said Dr. Klauer. “Be thankful, be humble, and keep those who supported you top of mind and close to your heart. Stay safe, stay healthy, stay osteopath.”

Following remarks from student speaker Ilyse Blazar, student awards were announced by Dean of Student Affairs Nadege Dady, Ed.D. Grace Nesheiwat received the “Top of Class Award” from the American Medical Women’s Association, as well as the Dean’s Award for having the highest academic standing, and the Excellence in Preclinical Years Student Award. Hector Zelaya, who sang the National Anthem for the program’s opening, received the DO Student of the Year Award. Pavel Medved received the Excellence in the Clinical Years Student Award, and Justin Chin earned the United States Public Health Service’s Excellence in Public Health Award. Stephanie Morales received the Medical Society of the State of New York Community Service Award. In closing, the graduates were led in reciting the Osteopathic Oath by Clinical Dean of Education Barbara Capozzi, DO.

Morales will be starting residency in pediatrics at Staten Island University Hospital. She watched the commencement ceremonies with her family and classmate Brandon Chavez, who became her fiancé on Mother’s Day.

The couple met in TouroCOM’s master’s program, a pipeline to the Doctor of Osteopathic Medicine (DO) program. Morales expressed excitement about residency, but like many of her classmates says she has mixed emotions about moving on. She credits family but also close friendships formed during the one-year master’s program with getting her through the five years of rigorous study.

“We were all fighting to get in to the [DO] program but never stopped helping each other and we all made it,” she said. Chavez will be a resident in emergency medicine at the University at Buffalo. “It seems like yesterday. I’m glad to be moving on but will miss a lot of lifelong friends,” she said.

Zelaya, a close friend and classmate also from the master’s program, will also be starting a residency in pediatrics, at NYU Winthrop Hospital on Long Island. He, too, finds parting bittersweet. “We’re all going to do our own things. We’re very happy for each other and proud of what we’ve accomplished but it’s hard to say good-bye.”