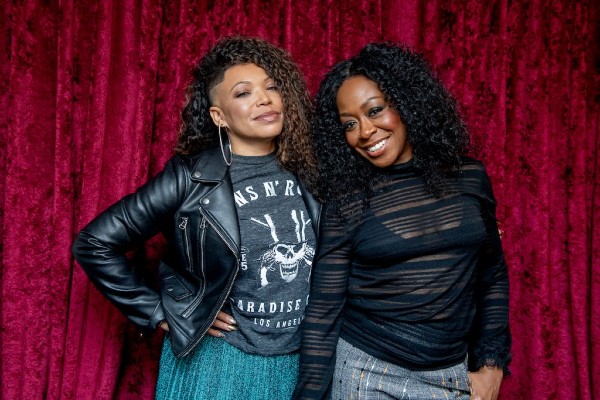 Today, BET announces the hosts of the 2021 “Soul Train Awards,” taking place from a new location, the Apollo in New York City, with co-hosts Tisha Campbell and Tichina Arnold.

Celebrating the best in soul music and the iconic television show’s 50th anniversary, the “Soul Train Awards” recognizes the best in Soul, R&B, and Hip Hop from both established industry legends and the next generation of promising artists. The 2021 “Soul Train Awards” premieres Sunday, November 28 at 8 pm ET/PT on BET and BET Her.

Actor, singer and writer Tisha Campbell (Martin, My Wife & Kids, Last Man Standing, Outmatched) will once again join actor, singer, and writer Tichina Arnold (Martin, Everybody Hates Chris, The Neighborhood, The Last Black Man in San Francisco) as hosts and co-producers of this year’s awards. The legendary best friend duo, both on the 90’s hit show “Martin” and in real-life, will return to the “Soul Train Awards” stage for the fourth time, bringing their dynamic comedy and infectious personalities to this year’s ceremony.

“We are thrilled to welcome back the incomparable pair, Tisha Campbell and Tichina Arnold, to host the “Soul Train Awards” for a legendary night in Harlem at the World Famous Apollo,” said Connie Orlando, EVP Specials, Music Programming & Music Strategy. “Their energy, like that of the Awards, remains unparalleled. Our hosts are a great complement to this year’s special event, celebrating the legacy of Soul Train with electrifying performances that will keep everyone buzzing.”

“Producing and hosting the Soul Train Awards for the last three years with my childhood friend has truly been one of the high points of my life,” said 2021 “Soul Train Awards” co-host Tisha Campbell. “Yet, upon hearing Tichina and I would be filming at the World Famous Apollo this year, we literally lost our minds with excitement. It is already an extreme honor to be synonymous with Don Cornelius’s legacy, and now, to also walk in the footsteps of the multitude of African-American talent that graced the Apollo stage is mind-blowing to both of us!”

“Returning to my hometown where it all began for us as young girls and hosting the iconic “Soul Train Awards” at the Apollo is a truly a childhood dream come true,” said 2021 “Soul Train Awards” co-host Tichina Arnold. “I’m honored to stand beside Tisha and take our place in history hosting and creatively producing such an iconic show.”

The “Soul Train Awards” presented by BET will feature an exciting lineup of unforgettable performances including special moments and appearances by some of the brightest stars in Black culture and entertainment. The annual event is committed to showcasing the impact of Soul Train on music and dance from the ‘70s to today.

Tisha Campbell is one of Hollywood’s most beloved actors and is one of the rare talents who has successfully made the transition from child star to adult superstar. She got her big break starring in the hit film, Little Shop Of Horrors; from there, she went on to star in major studio films including the Spike Lee cult classic School Daze, cultural epic House Party and two films with Eddie Murphy, Another 48 Hours and Boomerang. Following these high-profile roles, she notably went on to make history with the highly rated and often imitated Martin sitcom for five hilarious seasons with Martin Lawrence, and to star in a second hit sitcom, ABC’s My Wife And Kids with Damon Wayans. In recent years, Campbell has starred opposite Kim Jong in the ABC sitcom Dr. Ken and in the highly touted award-winning film, Blindspotting. She is currently starring opposite JoJo Siwa in the new Nickelodeon film, The J Team, preparing for her fourth consecutive turn as co-host of the “Soul Train Awards” and will star opposite Neil Patrick Harris in the forthcoming Netflix series Uncoupled.

Tichina Arnold was born to entertain in every form of creativity, from acting and singing to dancing and writing, and her career exemplifies her deep love and commitment to making people feel happy. “For me, the most important part is that I just move people to feel anything. Just to laugh, cry, whatever you need to get it out…I’m after the truth. I share everything with my audiences so that they can see that I’m going through it too!” From comedies to drama on the big screen or your home television set, Tichina’s characters are beloved around the world for their honest reactions to life’s all-too-real situations. Tichina appears in A24/Plan B’s 2-time Sundance Award-winning drama The Last Black Man In San Francisco (opposite Danny Glover, Jonathan Majors and Rob Morgan), and the Netflix collaborative feature film event with WWE, The Main Event. With her roles in Martin, Wild Hogs, Happily Divorced, Survivor’s Remorse, Daytime Divas, Everybody Hates Chris, and the CBS hit family comedy series The Neighborhood, Tichina has cemented her devoted, global fanbase. She is preparing for her fourth consecutive return as co-host and co-producer of the “Soul Train Awards.”

Jesse Collins Entertainment (JCE) is a full-service television and film production company and has played an integral role in producing many of television’s most memorable moments in music entertainment. The Emmy® nominated company has a multi-year overall agreement with ViacomCBS Cable Networks. On the theatrical film side, the company also has a first look on JCE’s film development projects which could include Viacom’s film entities such as Paramount Players. The award-winning and critically acclaimed television that JCE has produced includes miniseries—”The New Edition Story” and “The Bobby Brown Story;” scripted series—”American Soul” and “Real Husbands of Hollywood;” unscripted series – “Cardi Tries;” children’s series—”Bookmarks: Celebrating Black Voices;” award shows—”BET Awards,” “Black Girls Rock!,” “BET Honors,” “UNCF’s An Evening of Stars,” “BET Hip Hop Awards,” “ABFF Honors” and “Soul Train Awards;” specials—”John Lewis: Celebrating A Hero,” “Love & Happiness: An Obama Celebration,” “Change Together: From The March On Washington To Today,” “Stand Up for Heroes,” “Dear Mama,” “Amanda Seales: I Be Knowin’,” “Def Comedy Jam 25” and “Leslie Jones: Time Machine;” as well as competition/game shows—”Sunday Best,” “Hip Hop Squares,” “Nashville Squares” and “Rhythm & Flow.” Jesse Collins, founder and CEO of the company, is the executive producer of all programming. He is also a co-executive producer for the iconic Grammy Awards. Most recently, he was executive producer of The 2021 Pepsi Super Bowl Halftime Show and produced The 2021 Academy Awards. He will next executive produce the 2021 American Music Awards. Go to jessecollinsent.com for more information on the company.

The non-profit Apollo is a performing arts presenter, commissioner, and collaborator that also produces festivals and large-scale dance and musical works organized around a set of core initiatives that celebrate and extend the Apollo’s legacy through a contemporary lens, including the world premiere of the theatrical adaptation of Ta-Nehisi Coates’s Between the World and Me and the New York premiere of the opera We Shall Not Be Moved; special programs such as the blockbuster concert Bruno Mars Live at the Apollo; 100: The Apollo Celebrates Ella; the annual Africa Now! Festival; bi-annualWomen of the World (WOW) Festival; as well as other multidisciplinary collaborations with partner organizations. Since introducing the first Amateur Night contests in 1934, the Apollo has served as a testing ground for new artists working across a variety of art forms and has ushered in the emergence of many new musical genres—including jazz, swing, bebop, R&B, gospel, blues, soul, and hip-hop. Among the countless legendary performers who launched their careers at the Apollo are Ella Fitzgerald, Sarah Vaughan, Billie Holiday, James Brown, Stevie Wonder, Gladys Knight, Luther Vandross, H.E.R., D’Angelo, Lauryn Hill, Machine Gun Kelly, and Miri Ben Ari; and the Apollo’s forward-looking artistic vision continues to build on this legacy. For more information about the Apollo, visit www.ApolloTheater.org.

“Soul Train” was created in 1971 by visionary Don Cornelius and predominantly featured performances by R&B, pop, soul, and hip-hop artists, in addition to the occasional funk, jazz, disco, and gospel artists. When the final episode of the show’s historic thirty-five-year run aired in 2006, it was the longest running first-run, nationally syndicated program in television history. “Soul Train” highlighted a cast of incredible, ethnically diverse dancers who famously introduced the world to a whole new series of dance moves and styles on a weekly basis. Cornelius opened every show welcoming the audience to “the hippest trip in America” and closed each show wishing the audience “love, peace and soul.” Today, the legacy of “Soul Train” lives on through the legendary Soul Train dance line, which has become a timeless staple on dance floors across America. In 2016, BET, acquired the “Soul Train” brand and remains dedicated to revitalizing the brand while also honoring its heritage.

Soul Train Holdings, LLC was formed in May 2008 and is owned by InterMedia Partners and a partnership between Magic Johnson Enterprises and Ron Burkle’s investment firm, The Yucaipa Companies. The iconic franchise and catalog consists of more than 1,100 episodes and 40 specials from Don Cornelius Productions, Inc. Soul Train is the longest running, first-run, nationally syndicated music program in television history. During its 35-year run, the show featured lasting innovations such as the Soul Train line and the legendary sign off “Love, Peace and Soul.” At the heart of the show was Don Cornelius, the dancers and influential artists such as James Brown, Al Green, Ike & Tina Turner, Hall & Oates, Donna Summer, Marvin Gaye, The Jackson 5, Aretha Franklin, Stevie Wonder, Elton John, Whitney Houston, David Bowie, Prince, Run D.M.C. and Destiny’s Child.