Three Card Monte Tricks Anyone Can Learn From Harlem To Hollywood 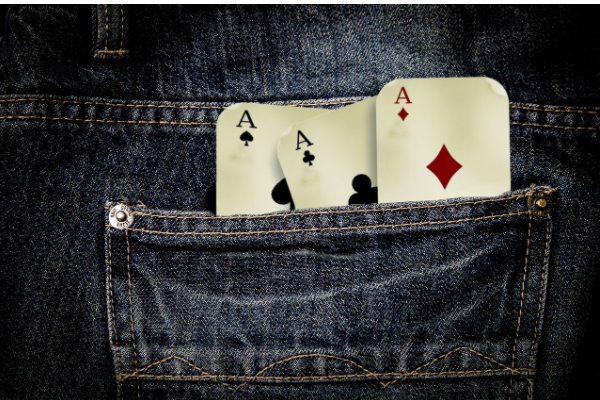 You’ve probably seen Monte played in various locations with three curved cards, discs made of leather, or even rugs.

All versions of this focus have similar mechanical principles. But its essence lies not in the objects used, but in the manipulations to which the victims of this deception are subjected.

The basis of the card scam

Monte’s basic principle is often referred to as “hype”. We are talking about imperceptible dexterous movements, giving the cheater the opportunity to throw in any card from a pair that he took into his palm. It seems to the victim that the card below is thrown. But the card at the top can also be thrown. Thus, the results of the game change as the cheater needs.

Observing the throw from people unfamiliar with Monte’s trick almost always results in the victim picking the wrong card and losing.

But it is not only with the help of hype that the victim can be deceived. One of the ways to cheat is to flip the card face up, which changes the position of the losing and winning cards. Since all this is done quickly, the victim does not have time to notice.

The “dog’s ear” trick is that the sharper folds the corner of the card so that the victim can easily notice it and want to put it on a bent card. But rarely does anyone notice that a sharpie instantly unbends one card and bends another. The victim cannot even understand that the well-wisher who peeled back the card is in fact a fraud.

There are quite a few descriptions of psychological techniques used by professional players in Monte. But the psychology of people makes them fall prey to the same tricks of the cheats. Obviously, the movement of the cards in the hands of a professional is not as important as the train of thought in the heads of the victims of deception is.

Let’s give a typical example. If a cheat notices that his opponent knows how to cheat, he simply stops cheating. As a result, the connoisseur of the game from among the victims does not bet on the curved card and loses.

Such “fair” play confuses observers, and they begin to believe in the possibility of playing fair.

A number of experts describe Monte as just a set of card tricks used for entertainment purposes. But in reality, Monte emerged as a scam. All the techniques of this game, including controlled throws, bent cards, and other methods of deception, were intended only to make money from gullible gamblers.

The modern world has long since moved away from such purposes. Software is now being developed primarily for the simple gambler. For example, playing free slot games no download, players can really have a fascinating time. But let’s go back to one of the oldest card games of the wild west.

In fact, the professional team of players at Monte has never lost to their honest opponents. After all, the very purpose of such a team is quick and easy enrichment, leaving the victim not the slightest chance.

Such gambling, if it is carried out with a large crowd of strangers, is always a scam. This is obvious since it is known that shillas are constantly working among the spectators during the game. This is the name of the cheats’ assistants. Each of them is paid for the psychological treatment of the victims – for example, for a pre-agreed rate in order to involve as many honest players as possible in the scam in order to rob them.

In fact, Monte is not even a game, since it is predetermined who will win. The professional cheats who came up with this set of card tricks is impossible to beat. In this scam, crooks don’t even need to give any honest player a chance to win in order to lure the rest. Knowledge of human psychology allows fraudsters to deceive everyone without exception.

To manage victims, the pros at Monte use 3 components:

All of these methods applied alternately or simultaneously, have been successful since the days of the Wild West.

Oddly enough, truthful information can be a means of deception. As a rule, in the team of players in Monte, women who know the technique of psychological manipulation are engaged in informing the victims. As soon as such a beauty whispers in the player’s ear that Monte’s dealer is cheating, he begins to follow the dealer. The dealer easily calculates a knowledgeable player by facial expressions and starts playing honestly with him, leaving him a loser.

Disguise usually concerns the appearance of professional cheaters. The poor, unkempt clothes and the provincial manners they use give the impression of being rustic and incapable of deceiving anyone. But, of course, this impression is false.

As for sleight of hand, a professional easily, quickly, and discreetly performs the manipulations with the cards described above.

How it happens in reality

Below are two ways to put some of the techniques into practice and make you feel like you are Monte.

The first trick will take a little preparation. You can props yourself. So, we take two pairs of cards. They must be the same in both pairs. For example, two dozen crosses and two kings of hearts. At the same time, different ones should be different as much as possible. Take the same colors.

These suits are not the best option. In terms of values, the pairs should also differ greatly. For example, you shouldn’t take an eight and a nine. It is better to have a picture on one and a number on the other. Of course, if you take, say, an eight of spades and a nine of crosses, this does not threaten failure. But the show, firstly, will become less spectacular, and also cause distrust among the public. You have two pairs.

The first thing you need to do is take two different ones and glue the shirts together. Using glue or double-sided tape, you create a double-sided card without a shirt. Then we take an ordinary card, say, a ten and a two-sided one. The king can be removed. The main thing is not to reveal the secret of focus yourself.

The order of performing focus is as follows. Demonstrate the ten and your blank with a picture of the king. Further, the main task is not to “light up” the uniqueness. You kind of turn over the king and give it to your partner, but when the person turns over what he received, there will be another. In fact, the double-sided one remained in your hand, and you turned the usual one over. So the deception remains a secret, and the public is bewildered.

But for everything to succeed, you need to master one trick, which is based solely on the dexterity of the handles. We hold the props with such a mini-fan in the right hand, the thumb on the upper, double-sided. The rest are on the bottom. Then we turn the hand, and in the moment of the coup, we need to move the upper one to the side with our thumb and bend the one below in the opposite direction so that they change. But it is necessary to make a turn with a substitution very quickly so that the viewer would think that we only took the top ten in the other handle, and turned the king over.

The partner has a closed baby, but don’t let it open ahead of time. Tell the “client” that he has a king of hearts, and you have a dozen crosses. Take a double-sided card at two diagonal corners, pull sharply, start shaking quickly and strongly, and at this moment twist with your index finger. Further, the surprised “client” opens his own and sees a substitution there. The effect is amazing.

In the second version, the use of traditional two cards is provided. This view is closer to the classic and is shown using three elements of the deck. We have two identical cards, for example, two tens, and the third is a queen. One of the dozens, as in the first version, is double. On the reverse side is the same lady.

The cards are fanned out in order from the top: double ten; lady; the usual ten. We really turn the bottom ten, and with the rest we perform the action that was in the first version, that is, an ordinary lady turns out to be turned upside down, and our homemade model opens the side with the picture. We put the inverted lady on the table, turn a simple ten, and with the last two we do the same action.

The duplicate is again open with a ten, and the inverted regular one is omitted. Where is the lady? The viewer will point to the one that lay on the surface of the second, but there will be a dozen. Once you’ve learned the basic trick, you can vary the trick in your own way. The audience will constantly be amazed. The most important thing is not to let you see all the props, and move quickly and confidently. Try to talk to the audience more. This helps to weaken attention.

Three Monte Cards is the most legendary card trick. It was born in the nineteenth century and has been a great way to make money for a very long time. Dexterous cheaters made fortunes on it. Now it is, rather, a funny trick, one of the techniques to surprise and amuse your friends. It is quite easy to learn how to handle the deck, and having mastered some simple subtleties, you can not only delight the audience but play with the audience and completely control the audience. Therefore, this type of fraud is dangerous to this day. There are many types of tricks in Monte. You can choose anyone for yourself, and learn, if not to make big money, then at least just surprise your friends.