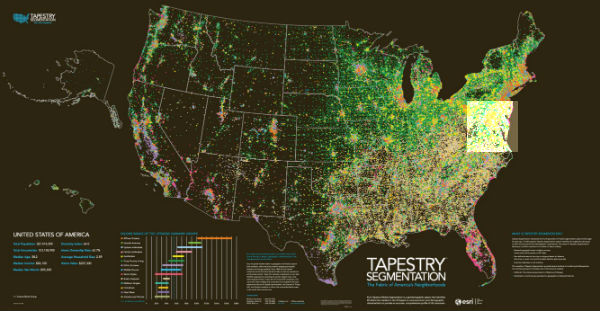 Where you live says a lot about you. While you’re not totally defined by where you go to sleep at night, you may have more in common with your neighbors than you think reports Business Insider.

That’s according to Esri, a geographic-information firm based in California, which offers a “ZIP Lookup” feature. The tool breaks down the characteristics of the individuals in a given neighborhood by culture, lifestyle, and demographics based on data collected from the area.

The data is then sorted into 67 unique market-segment classifications that have rather kitschy titles like “Trendsetters” and “Savvy Suburbanites.”

You can try it for yourself: Just head to the website, type in your ZIP code, and you’ll be greeted with a breakdown of your ZIP code’s demographic characteristics.

Here is an example of the breakdown for the Harlem neighborhood of Manhattan. 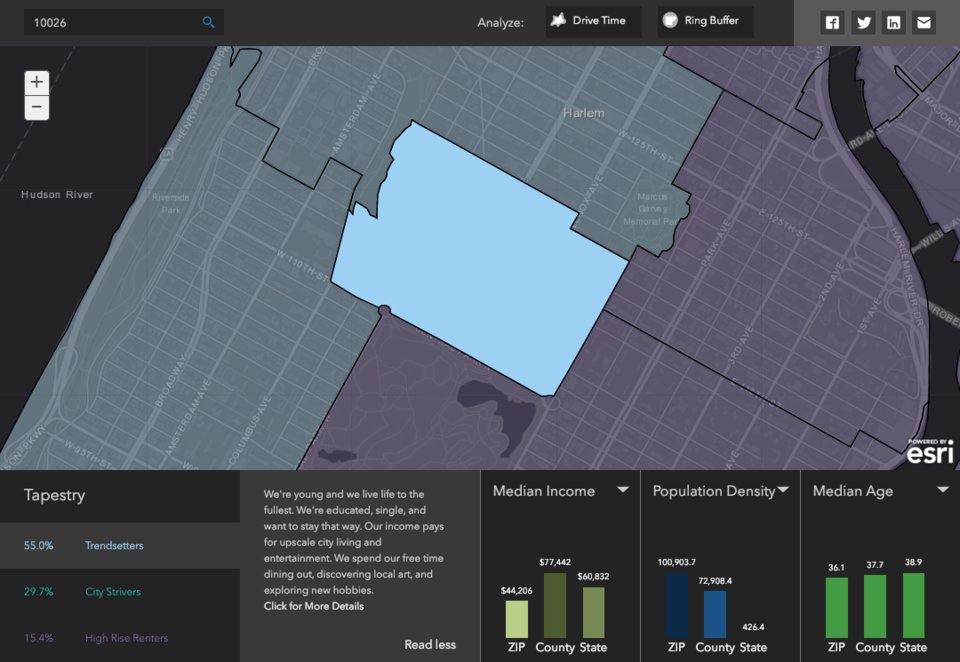 By clicking on the different demographics, you can see a summary of the type of person Esri’s geographic data says you are if you live in Harlem.

For Harlem, 55% are coded as “Trendsetters” — educated singles, who “want to stay that way,” with incomes big enough to pay for upscale city living and hobbies that include “dining out” and “exploring different hobbies.” (Who knew eating was considered a hobby?)

For Harlem, 55% are coded as “Trendsetters” — educated singles, who “want to stay that way,” with incomes big enough to pay for upscale city living and hobbies that include “dining out” and “exploring different hobbies.” (Who knew to eating was considered a hobby?)

Thirty percent are classified as “City Strivers,” people who are “relatively young, foreign-born” with most of their income going to rent. And just over 15% are described as “High Rise Renters” who commute far for work and “struggle to make ends meet.”

According to Esri, the population density of Harlem — the number of people per square mile of land — is just over 100,00 people. 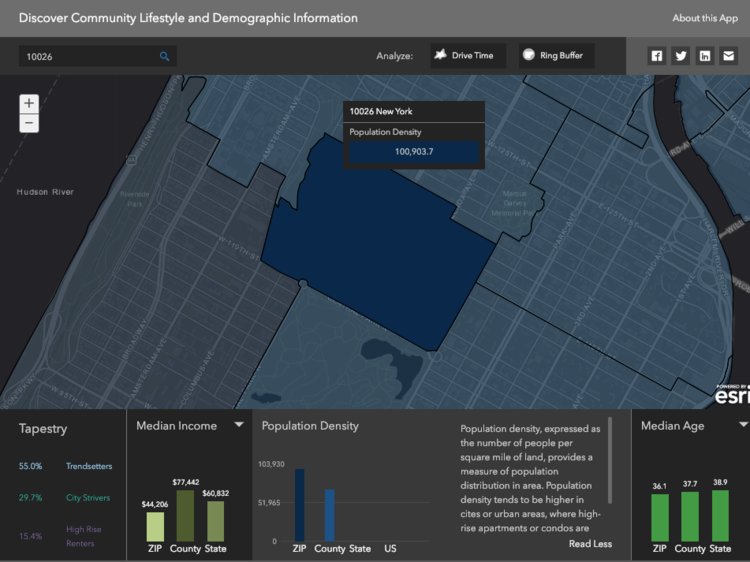 High population density is common in urban areas and cities and can usually be a good indication for prospective businesses hoping to set up shop.

Here is what the median income looks like for ZIP code 10026. 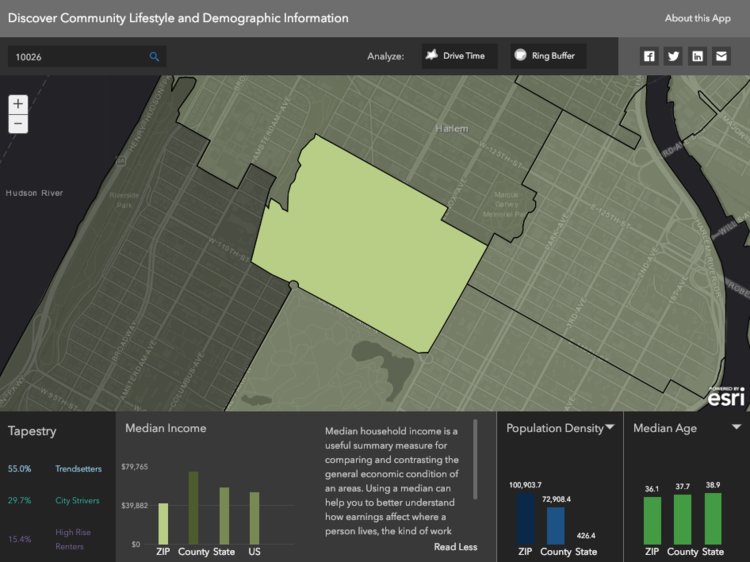 The median income for Harlem is just over $44,000 — a metric that can be helpful in understanding what a person does and the level of education they’ve attained.

Here’s the age spectrum in that neighborhood. 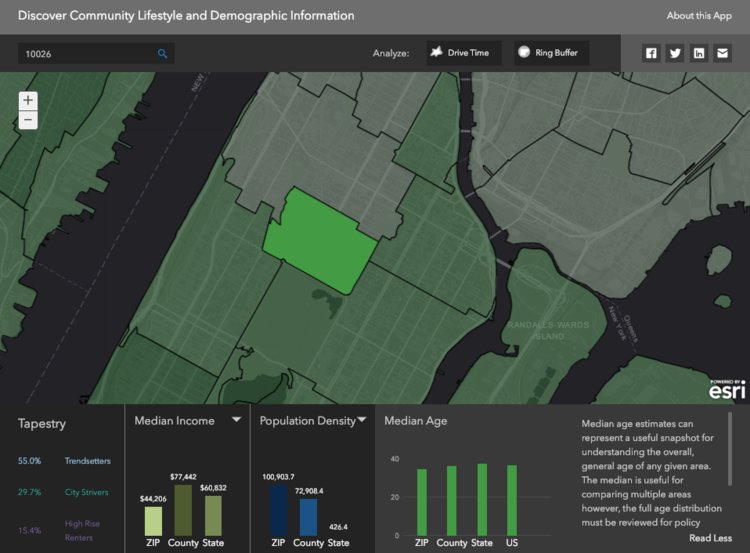 The median age for this New York ZIP code is 36 — compared to Midtown’s median age of 46 years old, there’s a significant amount of younger people living in the Uptown neighborhood than closer downtown.

The website also allows you to view other demographic data. Take, for example, the percentage of graduate or professional degrees in New York City’s Upper West Side.

At nearly 48%, the number of Upper West Side residents with graduate or professional degrees is more than double the state average.

On a quirkier note: Just across the Hudson River, Jersey City boasts a large college football fanbase, another metric Esri keeps tabs on. 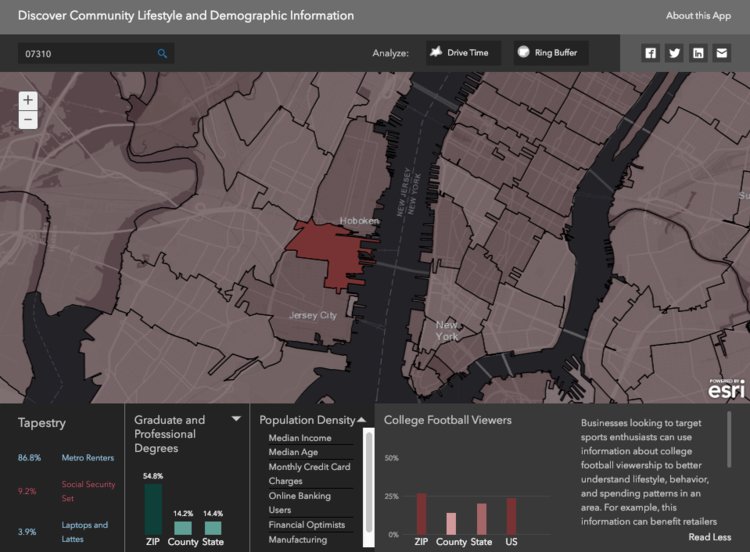 Advertisers and business owners can use this type of data to better understand the viewership behavior of people who live in certain areas. They can then develop different types of offerings, like sports merchandise or targeted ads.

Esri also lets you look up monthly credit card charges per ZIP code or whether your neighborhood has a high percentage of “Financial Optimists” — people who plan to be better off than they are now in 12 months.

To look up your own ZIP code, head to Esri’s website.