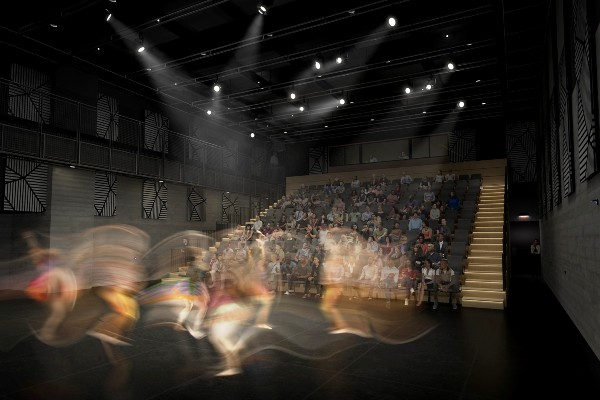 It will officially open in March 2022, Apollo leadership announced today.

Featuring two new theaters that will provide vibrant, year-round artistic offerings that build on the cultural heritage of Harlem and celebrate uptown’s enormous well of creativity, the Apollo’s Victoria Theater will allow the non-profit Apollo to expand its scope of artistic, educational, and community programs.

It will also provide greater access to professional-level theater space for local artists, artist collectives, and small and mid-size Harlem and NYC-based arts organizations for the development and presentation of cross-disciplinary performance-based work. Originally scheduled to open in 2021, work on the space was delayed due to COVID-19.

The Apollo’s Victoria Theater will officially open in March with a special three-concert presentation of Dreaming Zenzile, a modern jazz theater piece based on the extraordinary life of the late South African singer and political activist Miriam Makeba.

Written and performed by Grammy-nominated vocalist and songwriter Somi Kakoma, the work is presented in association with National Black Theatre.

The Apollo was selected in response to New York’s Empire State Development (ESD) Request for Proposals in 2015 to build out, manage, and operate the cultural spaces in the Victoria Theater Redevelopment Project.

The organization has been developing a number of programs, including a subsidized rental initiative for eligible organizations to address the need for space to create and perform artistic work and community-centered initiatives.

Beginning in November 2021, the Apollo will offer eligible, mission-aligned, non-profit arts and cultural organizations the opportunity to apply for subsidies through its Culture Forward program that significantly reduce the cost of using the theaters.

Organizations will have the use of the professional, high-quality technical equipment, such as lights and sound, a production supervisor, and essential staff needed for events including box office staff, ushers, maintenance and security teams, all-inclusive, at significantly reduced rates of $500 per day for performances and less for rehearsals.

Additional details on the Culture Forward application process will be announced in the fall.

The Victoria will also address the lack of theater space uptown and bring additional revenue to Upper Manhattan by increasing audiences, further driving economic investment in the Harlem community.

“When the Apollo first began its journey to the Victoria with the Empire State Development team in 2012, we could never have imagined that a pandemic would create so much uncertainty about the future of non-profit arts organizations nationwide,” said Apollo Theater President and CEO Jonelle Procope. “We have considered the financial burden many are now facing, due to COVID-19 and the Apollo’s Culture Forward program is responsive to the needs of artists and smaller cultural organizations of color, which continue to be under-resourced.”

“We know that artists, art collectives and organizations across the city look for accessible space, especially uptown. We hope that the Apollo’s Victoria will fill that void. The new theaters will also give the Apollo an opportunity to grow our artistic programming and develop and collaborate on new works that speak directly to the needs of our community. This expansion will allow the Apollo to look to the future while protecting the heritage that makes Harlem such an indispensable part of New York City and the world,” said Apollo Theater Executive Producer Kamilah Forbes.

Related:  ALL ARTS Collaborates With The Shed To Introduce 4 Emerging NYC Black Artists In Residence

The Apollo’s 25,000-square foot facility, designed by Kostow Greenwood Architects, will be located on the third and fourth floors of the Victoria Theater Redevelopment Project.

The cultural spaces allow the Apollo to serve the needs of its artists, artistic partners, staff, audiences, and community. Since being chosen to shepherd this project to fruition, the Apollo has raised $3.75 million for the creation, construction, and build-out of the theaters.

As part of the original mandate for the space by ESD, the Apollo continues to be in conversation with local non-profit arts organizations to use the Victoria Theater’s office space and commit to ongoing theater usage on a long-term basis.

Because of the evolution of the project since it was announced, and the need for these longer-term commitments to ensure the viability of the theater, the previously announced partners will no longer be occupying the administrative spaces but are still eligible for the Culture Forward subsidy program.

With music at its core, the Apollo’s programming extends to dance, theater, spoken word, and more.

This includes the world premiere of the theatrical adaptation of Master Artist-in-Residence Ta-Nehisi Coates’s Between the World and Me and the New York premiere of the opera We Shall Not Be Moved; special programs such as the blockbuster concert Bruno Mars Live at the Apollo; 100:

The Apollo Celebrates Ella; and the annual Africa Now! Festival. The non-profit Apollo Theater is a performing arts presenter, commissioner, and collaborator that also produces festivals; large-scale dance and musical works organized around a set of core initiatives that celebrate and extend the Apollo’s legacy through a contemporary lens, including the Women of the World (WOW) Festival; as well as other multidisciplinary collaborations with partner organizations.