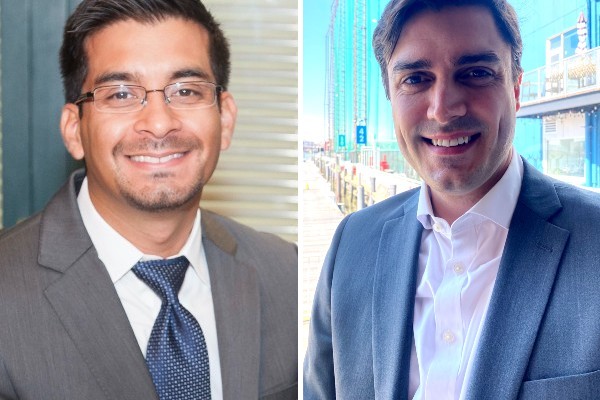 The Hudson River Park Trust announced Robert Atterbury as its new Executive Vice President of Park Relationships & Programs and Robert Rodriguez as Executive Vice President of Park Management. Atterbury joins the Trust with extensive local government experience, and in his new role, will support and expand the Park’s engagement with key stakeholders through programming and other initiatives.

Rodriguez, whose public service career has focused on parks and recreation management, will oversee various Park operations, from maintenance of public spaces to public safety.

The additions to the Trust’s executive team come as the Trust is currently leading $180 million in construction towards the completion of Hudson River Park.

”Hudson River Park is both a mature public park – one of the largest in New York City – and an evolving project still working to advance the environmental, open space and financial visions outlined in our enabling statute,” said Noreen Doyle, President & CEO of the Hudson River Park Trust. “The Trust is so fortunate to have attracted such experienced, talented professionals who can help on both of those fronts as we aim to create and deliver the highest quality open space and experiences for all our visitors.”

As the Trust’s new Executive Vice President of Park Relationships & Programs, Robert Atterbury is overseeing programs, initiatives and external relationships that support the Park’s engagement with users, visitors and the surrounding community. Before joining the Trust, Atterbury served as Deputy District Director for Community Relations for Congressman Jerrold Nadler where he was closely involved in a number of major projects along Manhattan’s West Side, including spearheading the creation of the Stonewall National Monument and helping to shape major infrastructure projects such as the Port Authority Bus Terminal, renovation of Chelsea NYCHA developments and Pennsylvania Station.

Atterbury has also worked closely with New York’s LGBTQ+ community, including working on the passage of the Equality Act in Congress, increasing funding for NYS homeless youth programs and securing insurance coverage in NYS for transition-related care.

Atterbury previously worked for the NYS Assembly and has served State Senators Tom Duane and Brad Hoylman. He also founded and currently leads the Hooper Grove community garden in Brooklyn.

In his new role as Executive Vice President of Park Management, Robert Rodriguez is leading both daily functions and long‐term planning relating to the public’s safe and enjoyable use of the approximately 4 miles of park.

Rodriguez joins the Trust from Liberty State Park in Jersey City, where he served as Superintendent since 2011. At Liberty State Park he was responsible for all planning, maintenance and operations, public programs, events management, and public safety.

As Superintendent, Rodriguez also obtained and managed over $10M in grants and helped lead the planning effort to restore 240-acres of contaminated land into active and passive recreation with sizeable ecological improvements.

Prior to his role as Superintendent, Rodriguez was the park manager of Brendan Byrne State Forest in New Jersey’s Pine Barrens and served as a program specialist with the New Jersey Department of Environmental Protection’s Green Acres Program.

“Hudson River Park is one of New York’s icons,” said Robert Atterbury, Hudson River Park Trust’s Executive Vice President of Park Relationships & Programs. “I’m delighted to be able to continue to serve the West Side community and support the Trust’s enormous range of work. From caring for our river and educating thousands of kids about our environment, to our summer dance and music programming, to sun-filled lawns and wide range of sports facilities, the park truly has something for everyone.”

“The Trust and all of its partners have done incredible work over the decades in transforming this once derelict waterfront into a world-class park,” said Robert Rodriguez, Hudson River Park Trust’s Executive Vice President of Park Management. “I am honored to help major projects like the construction of new parkland at Gansevoort Peninsula and Pier 97, and the renovation of Chelsea Waterside, through to the finish line and beyond. It’s an incredible opportunity to be part of the team that will continue the effort to improve and maintain this magnificent public resource.”

“Hudson River Park is a New York City treasure, and its development and stewardship are critical to the continued success of the park,” said Jeffrey LeFrancois, Chair of the Hudson River Park Advisory Council. “Mr. Atterbury and Mr. Rodriguez bring a breadth of experience to the Trust’s already impressive roster that Noreen Doyle has completed building out, and it will serve the park and public well. The Advisory Council looks forward to continuing to work with the Trust, and is pleased to welcome Robert and Rob to the team.”

Atterbury and Rodriguez join an impressive roster of leadership at the Trust. A longtime Executive Vice President at the Trust, Noreen Doyle was appointed as the Trust’s permanent President & CEO in June 2021, having served in an acting capacity since February 2021.

Doyle was joined by Kimberly Quinones as its Chief Financial Officer and Executive Vice President in July 2021. Quinones previously served as a Director at the Global Blockchain Business Council and the Executive Director of the NYC Blockchain Center, as well as the Chief Financial Officer of the Roosevelt Island Operating Corporation, as part of a long career in public finance.

Christine Fazio continues as the Trust’s General Counsel, a position she has held since May 2018.

Both the Trust and the park itself are governed by the Hudson River Park Act, a 1998 law that established the park and its requirements.

The Hudson River Park Trust offers over 800 cultural, educational and family programs annually and protects, enhances and conducts original scientific research within its 400-acres of estuarine sanctuary as core aspects of its mission.

The Trust oversees the creation and maintenance of approximately 150 acres of public park and open space on piers and the adjacent upland area and engages in robust community engagement and planning.

Guided by an ambitious legislative vision for a magnificent waterfront park, the Trust continues to expand its diverse group of users, advance park construction and ensure high-quality services and open spaces through a model of financial self-sufficiency.