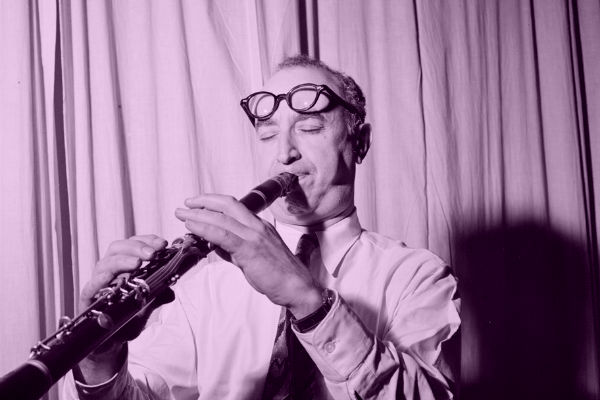 He is well known for organizing and financing historic recording sessions with Tommy Ladnier and Sidney Bechet.

He also recorded a number of times with Bechet and briefly acted as manager for Louis Armstrong.

Mezzrow is equally well remembered as a colorful character, as portrayed in his autobiography, Really the Blues (which takes its title from a Bechet composition), co-written with Bernard Wolfe and published in 1946.

According to one biographer, “As a juvenile delinquent, was in and out of reformatory schools and prisons where he was exposed to jazz and blues music.

He began to play the clarinet and decided to adopt the African American culture as his own.

He became a ubiquitous figure on the Chicago jazz scene of the 1920s and ran in the circles of musicians that included King Oliver, Louis Armstrong, Sidney Bechet, Jimmy Noone, Al Jolson, Baby Dodds, Bix Beiderbecke, Louis Bellson and many others.

He was an advocate for the pure New Orleans jazz style.

Along with other white musicians of his era, such as Eddie Condon and Frank Teschemacher, Mezzrow visited the Sunset Café in Chicago to learn from and listen to Louis Armstrong and his Hot Five.

He admired Armstrong so much that after the release of “Heebie Jeebies”, he, along with Teschemacher, drove 53 miles to Indiana in order to play the song for Bix Beiderbecke.

Mezzrow’s first recordings were released in 1933, under the band name Mezz Mezzrow And His Orchestra.

The group was composed primarily of black musicians such as Benny Carter, Teddy Wilson, Pops Foster, and Willie “The Lion” Smith, but also included the Jewish trumpet player Max Kaminsky.

During the 1930s and 1940s, Mezzrow organized and took part in many recording sessions with Sidney Bechet.

In the mid-1940s Mezzrow started his own record label, King Jazz Records, featuring himself with groups, usually including Sidney Bechet and often including the trumpeter Oran “Hot Lips” Page.

He also played on six recordings by Fats Waller.

He appeared at the 1948 Nice Jazz Festival, following which he made his home in France and organized many bands that included French musicians like Claude Luter and visiting Americans, such as Buck Clayton, Peanuts Holland, Jimmy Archey, Kansas Fields, and Lionel Hampton.

With ex-Count Basie trumpeter Buck Clayton, he made a recording of Louis Armstrong’s “West End Blues” in Paris in 1953.

His total recorded output amounts to almost 150 sides, all of which were also collected and re-released on various albums.

Despite this lengthy and successful career, the record producer Al Rose was critical of Mezzrow’s musicianship, saying that in his opinion “he wasn’t a very good clarinetist,” while praising him for his willingness to help other musicians in need and citing “his generosity and his total devotion to the music we call jazz.”

Milton Mesirow was ethnically and religiously Jewish, and was raised in Chicago.

His wife, Johnnie Mae, was a black Baptist. They had one son, Milton Mesirow, Jr. According to the younger Mesirow, the surname “Mezzrow” was a “pen name” of his father’s.

In an interview with the New York Times in 2015, “Mezz Jr.”, as he was known, told a reporter, “My father put me in a shul, and my mother’s side tried to make me a Baptist. So when I’m asked what my religion is, I just say ‘jazz.'”

Mezzrow praised and admired African-American culture and style. In his autobiography, Really the Blues, he wrote that from the moment he heard jazz he “was going to be a Negro musician, hipping [telling] the world about the blues the way only Negroes can.”

Eddie Condon said of him (in We Called It Music, London; Peter Davis 1948), “When he fell through the Mason-Dixie line he just kept going”.

The family lived in Harlem, New York, where Mezzrow declared himself a “voluntary Negro” and was listed as Negro on his draft card in World War II.

The family lived in Harlem, New York, where Mezzrow declared himself a “voluntary Negro” and was listed as Negro on his draft card in World War II.

He believed that “he had definitely ‘crossed the line’ that divided white and black identities”.

Mezzrow became known as much for his cannabis proliferation as his music. In his time, he was so well known in the jazz community for selling marijuana that Mezz became slang for marijuana, a reference used in the Stuff Smith song, “If You’re a Viper”.

He was also known as the Muggles King, the word muggles being slang for marijuana at that time; the title of the 1928 Louis Armstrong recording “Muggles” refers to this. Armstrong was one of his biggest customers.

A letter from 1932, written by Armstrong, demonstrates this relationship; while in England, Armstrong detailed in this letter about where and how Mezzrow should send marijuana.

In 1940 he was arrested in possession of sixty joints while trying to enter a jazz club at the 1939 New York World’s Fair, with intent to distribute.

When he was sent to jail, he insisted to the guards that he was black and was transferred to the segregated prison’s black section. In Really the Blues, he wrote:

Just as we were having our pictures taken for the rogues’ gallery, along came Mr. Slattery the deputy and I nailed him and began to talk fast. ‘Mr. Slattery,’ I said, ‘I’m colored, even if I don’t look it, and I don’t think I’d get along in the white blocks, and besides, there might be some friends of mine in Block Six and they’d keep me out of trouble’. Mr. Slattery jumped back, astounded, and studied my features real hard. He seemed a little relieved when he saw my nappy head. ‘I guess we can arrange that,’ he said. ‘Well, well, so you’re Mezzrow. I read about you in the papers long ago and I’ve been wondering when you’d get here. We need a good leader for our band and I think you’re just the man for the job’. He slipped me a card with ‘Block Six’ written on it. I felt like I’d got a reprieve.

Mezzrow was lifelong friends with the French jazz critic Hugues Panassié and spent the last 20 years of his life in France.

He was preceded in death by his wife, Johnnie Mae Mezzrow, and was buried in the Père Lachaise Cemetery in Paris. The couple was survived by their son Mezz Jr.

In 2015 a Greenwich Village jazz club called Mezzrow was named in his honor.