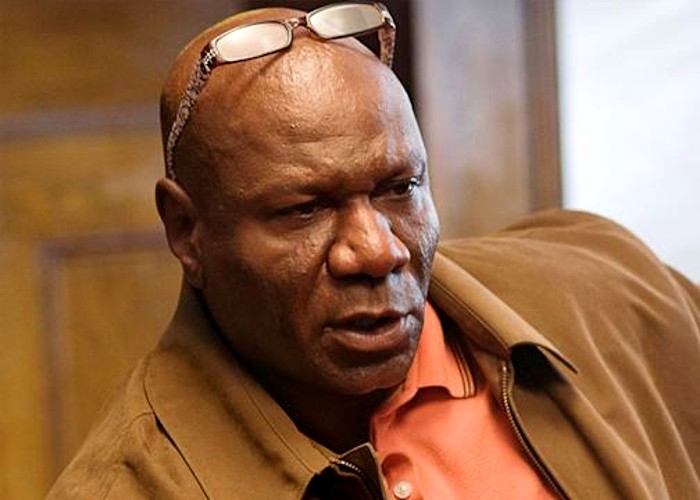 He is best known for his starring role as IMF Agent Luther Stickell in the Mission: Impossible film series and his supporting role as gang kingpin Marsellus Wallace in Pulp Fiction.

Rhames was born and raised in Harlem, New York City. He was named after NBC journalist Irving R. Levine.

Rhames entered New York’s High School of Performing Arts, where he developed his love of acting. After high school, he studied drama at SUNY Purchase, where fellow acting student Stanley Tucci gave him his nickname “Ving”. Rhames later transferred to the Juilliard School’s Drama Division (Group 12: 1979–1983) where he graduated with a Bachelor of Fine Arts degree in 1983.

Rhames first appeared on Broadway in the play The Boys of Winter in 1984. He started out in film in Wes Craven’s The People Under the Stairs (1991) as Leroy, watched over Kevin Kline as Secret Service agent Duane Stevensen in Dave (1993), and played Marsellus Wallace in Pulp Fiction (1994). He also played the buddy of George Clooney in Out of Sight (1998).

Rhames won a Golden Globe in 1998 for Best Actor – Miniseries or Television Film in HBO’s Don King: Only in America. At the ceremony he gave his award to fellow nominee Jack Lemmon, saying, “I feel that being an artist is about giving, and I’d like to give this to you.” Lemmon was clearly touched by the gesture as was the celebrity audience who gave Lemmon a standing ovation.

Lemmon, who tried unsuccessfully to give the award back to Rhames, said it was “one of the nicest, sweetest moments I’ve ever known in my life.” The Hollywood Foreign Press Association announced later that they would have a duplicate award prepared for Rhames. That moment was #98 on E!’s 101 Awesome Moments in Entertainment.

The New York Times lauded Rhames for the act, writing that in doing so he “demonstrated his capacity for abundant generosity.”

Rhames appeared in Striptease (1996) as the wisecracking bodyguard Shad, Jesus-praising paramedic Marcus in Bringing Out the Dead (1999), and reprised his Luther Stickell role for Mission: Impossible 2 (2000).

He played Johnnie Cochran in American Tragedy (2000), the ex-con boyfriend of Jodie’s mother in the John Singleton film Baby Boy, portrayed a gay drag queen in the television movie Holiday Heart, contributed his voice for the character of Cobra Bubbles in Lilo & Stitch (2002) and the subsequent TV series, and played a stoic cop fighting zombie hordes in Dawn of the Dead (2004) and Day of the Dead (2008) remakes.

Rhames has also appeared in a series of television commercials for RadioShack, usually performing with Vanessa L. Williams.

In March 2005, Rhames played the lead role on a new Kojak series, on the USA Network cable channel (and on ITV4 in the UK). The bald head, lollipops, and “Who loves ya, baby?” catchphrase remained intact, but little else remained from the Telly Savalas-starring original.

Rhames voiced the part of Tobias Jones in the computer game Driver 3.

He is the only actor besides Tom Cruise to appear in all six Mission: Impossible films. It was announced that he would have a role in the Aquaman-based show Mercy Reef; however, due to the integration of The WB and UPN for the new network, CW, Mercy Reef was not picked up. Rhames played a homosexual – and possibly also homicidal – firefighter who comes out of the closet in I Now Pronounce You Chuck and Larry. He narrates the BET television series American Gangster.

In the 2008 film Saving God, he played an ex-con who is released from prison a changed man, looking to take over his father’s former church congregation in a deteriorating neighborhood.

Rhames stars in Phantom Punch, a biopic of boxer Sonny Liston, released directly to DVD, as well as The Tournament, portraying a fighter out to win a no-rules tournament.

Rhames makes an appearance in Ludacris’s song “Southern Gangstas” on his album Theater of the Mind. Rappers Playaz Circle and Rick Ross are also featured on the track.

In 2015, he filmed a series of commercials for The ADT Corporation.

Rhames is one of the narrators for UFC.

Rhames narrated the team introductions for the New England Patriots and Atlanta Falcons in Super Bowl LI in February 2017.

Since 2014, Rhames has provided the narration for numerous Arby’s commercials, with the slogan “Arby’s: We have the meats!”