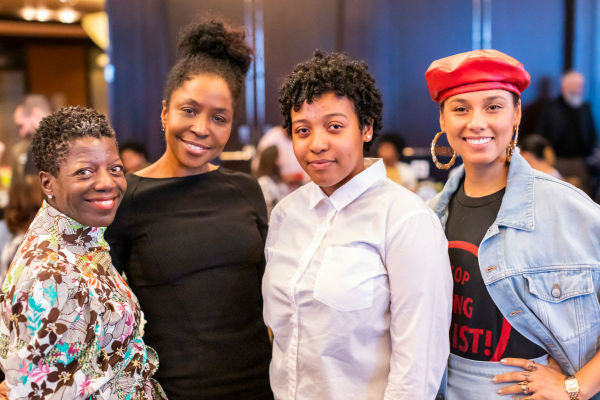 Thelma Golden, Director and Chief Curator of the Studio Museum, welcomed guests and spoke about the profound legacy of Peggy Cooper Cafritz

. She shared her memorable first meeting with Cafritz, when she told her she wanted to be a curator and Cafritz responded with “you will.” Golden recounted the countless lives Cafritz touched as a civil rights activist, educational visionary, champion of artists, and believer in institutions, mentioning the bequest to the Studio Museum and the Duke Ellington School of the Arts, which included more than 650 works of art—the largest gift of artworks by artists of African descent ever made. Simone Leigh, also shared a few moving words on the life and legacy of mentor and friend Cafritz, noting Cafritz’s dedication to supporting emerging artists and the influence she had on Leigh’s career.

Golden described the vital impact of the Museum’s educational programs and the ongoing programming in Harlem and beyond as the Studio Museum constructs its new home, designed by Sir David Adjaye of Adjaye Associates with Cooper Robertson. Following Golden’s remarks, Ashley Teague, a student from the Museum’s signature teen program Expanding the Walls, gave a moving speech about her experience and sang an original song for the group.