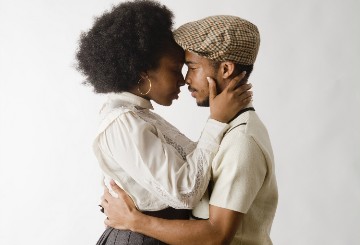 In light of the wonderful display of Lovers Rock music and culture in Steve McQueens’ Small Axe series, ArtMattan Films is pleased to release virtually the documentary The Story of Lovers Rock as a way to provide additional historical and cultural context to this special moment in Black British history.

The Story of Lovers Rock is first and foremost a film about Black Social Dance. The US parallel would be the “slow-dance,” the “Bop,” “Sunset Bop.”

Under dark blue or red lights in a crowded room young men and women came together to experience the ritual intimacy of dance, flirtation, and love to the sounds of romantic music.

Lovers Rock, often dubbed ‘romantic reggae’ is a uniquely black British sound that developed in the late 70s and 80s against a backdrop of riots, racial tension, and sound systems.

Live performances, comedy sketches, dance, interviews, and archival footage shed light on the music and the generation that embraced it.

Lovers Rock allowed young people to experience intimacy and healing through dance- known as ‘scrubbing’- at parties and clubs.

This dance provided a coping mechanism for what was happening on the streets. Lovers Rock developed into a successful sound with national UK hits and was influential to British bands (Police, Culture Club, UB40) These influences underline the impact the music was making in bridging the multi-cultural gap that polarized the times.

The Story of Lovers Rock sheds light on this long-forgotten period of British music, social and political history.

“Mr. Shabazz conveys a love of the music and its culture.” ~ New York Times

“The Story of Lovers Rock, an unapologetically single-minded appeal for the legacy of this music.” ~ Slant Magazine

“It’s the music that matters, and that is put on the screen with real skill and affection.” ~ London Evening Standard

“You can add The Story of Lovers Rock to the short list of must-see, politically-tinged documentaries which shed light on the cultural roots of a lesser-known musical genre, ala Calypso Dreams and Buena Vista Social Club.” ~ AALBC.com

ArtMattan Films celebrates in 2021 twenty-nine years of exposing US audiences to a large variety of films about the human experience of people of color in many parts of the world.

Films released by ArtMattan Films include Kirikou and the Sorceress, The Tracker, Gospel Hill, Scheherazade, Tell Me a Story, The Pirogue, Tango Negro: The African Roots of Tango, White Lies, The Man Who Mends Women, and most recently The Citizen and Mama Africa: Miriam Makeba. ArtMattan Films, 212.864-1760, Info@africanfilm.com, www.AfricanFilm.com