The “Slave Bible” That Removed Key Passages To Justify Rebellion 1807 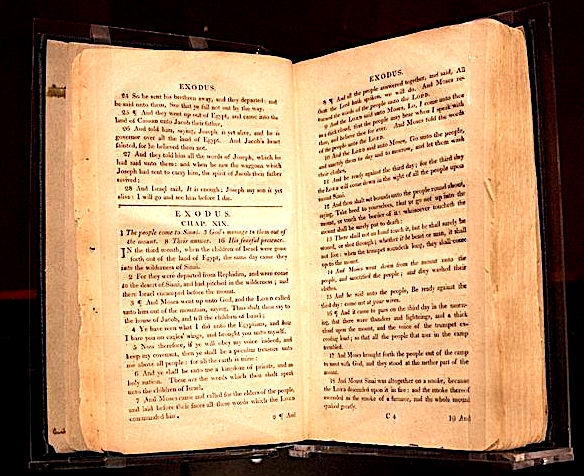 In an 1846 speech to the British and Foreign Anti-Slavery Society, Frederick Douglass summed up the twisted bond between slavery and religion in the U.S. He began with a short summary of atrocities that were legal, even encouraged, against enslaved people in Virginia and Maryland, including hanging, beheading, drawing and quartering, rape, “and this is not the worst.” He then made his case:

No, a darker feature is yet to be presented than the mere existence of these facts. I have to inform you that the religion of the Southern states, at this time, is the great supporter, the great sanctioner of the bloody atrocities to which I have referred. While America is printing tracts and Bibles; sending missionaries abroad to convert the heathen; expending her money in various ways for the promotion of the gospel in foreign lands, the slave not only lies forgotten, uncared for, but is trampled underfoot by the very churches of the land.

Douglass did not intend his statement to be taken as an indictment of Christianity, but rather the hypocrisy of American religion, both that “of the Southern states” and of “the Northern religion that sympathizes with it.” He speaks, he says, to reject “the slaveholding, the woman-whipping, the mind-darkening, the soul-destroying religion” of the country while professing a religion that “makes its followers do unto others as they themselves would be done by.”

Douglass harshly condemns slave society in the U.S., but, perhaps given his audience, he also politically elides the extensive role many churches in the British Empire played in the slave trade and Atlantic slave economy—a continued role, to Douglass’s dismay, as he found during his UK travels in the 1840s. I’m not sure if he knew that forty years earlier, British missionaries traveled to slave plantations in the Caribbean armed with heavily-edited Bibles in which “any passage that might incite rebellion was removed,” as Brigit Katz writes at Smithsonian. But he would hardly have been surprised.

The use of religion to terrorize and control rather than liberate was something Douglass understood well, having for decades keenly observed slaveowners finding what they needed in the text and ignoring or suppressing the rest. In 1807, the Society for the Conversion of Negro Slaves went so far as to literally excise the central narrative of the Old Testament, creating an entirely different book for use by missionaries to the West Indies. “Gone,” Katz points out, “were references to the exodus of enslaved Israelites from Egypt,” references that were integral to the self-understanding of millions of Diaspora Africans.

Gone also were verses that might explicitly contradict the few proof texts slaveholders quoted to justify themselves. Especially dangerous was Exodus 21:16: “And he that stealeth a man, and selleth him, or if he be found in his hand, he shall surely be put to death.” The typical 66 books of a Protestant Bible had been reduced to parts of just 14. How is it possible to publish a Bible without what amounts to the mythic origin story of ancient Israel? One answer is that this was a different religion, one whose aim, says Anthony Schmidt, curator of the Museum of the Bible, was to make “better slaves.”

The “Slave Bible” did not cut out the subject completely. Joseph’s enslavement in Egypt remains, but this is likely as an example, says Schmidt, of someone who “accepts his lot in life” and is rewarded for it, a story U.S. churches used in a similar fashion. Passages in the New Testament that seemed to emphasize equality were cut, as was the entire book of Revelation. The infamous Ephesians 6:5—“servants be obedient to them that are your masters according to the flesh, in fear and trembling”—remained.

Whether or not the Bible really did sanction slavery is a question still up for debate—and maybe an unanswerable one has given differences in interpretive frameworks and the patchwork nature of the disparate, redacted texts stitched together as one. But the fact that British and American churches deliberately used it as a weaponized tool of propaganda and indoctrination is beyond dispute. The so-called “Slave Bible” is both a fascinating historical artifact, a very literal symbol of a practice that was integral to the institution of slavery—the total control of the narrative.

Such practices became more extreme after the Haitian Revolution and the many bloody slave revolts in the U.S., as the planter class became increasingly desperate to hold on to power. One of only three extant “Slave Bibles,” the abridged version—called Parts of the Holy Bible, selected for the use of the Negro Slaves, in the British West-India Islands—is now on display at the Museum of the Bible in Washington, DC, on loan from Fisk University. In the NPR interview above, Schmidt explains the book’s history to All Things Considered’s Michel Martin, who herself describes the text’s purpose in the most concise way: “To associate human bondage and human slavery with obedience to the higher power.”

Via The Smithsonian and Photo via the Museum of the Bible