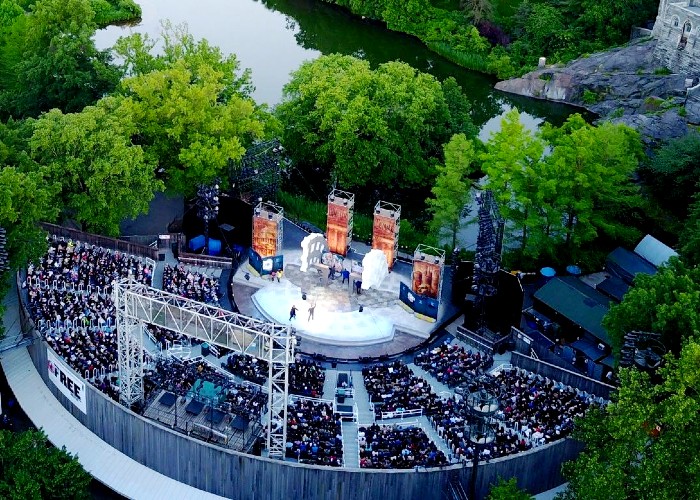 GALA ON THE GREEN will take place on Tuesday, May 24, 2022, at The Delacorte Theater, kicking off the 60th Anniversary season of Free Shakespeare in the Park.

The unique summer gala will be a one-night-only evening of celebration on the Delacorte Lawn in Central Park.

Additionally, there will be performances during cocktails by Jina Brass Band and DJ Rich Medina. More appearances will be announced at a later date. Meg Zervoulis will serve as musical director.

“For over 60 years, The Public has created a great celebration of civic unity: Free Shakespeare in the Park. Imitated globally, Free Shakespeare in the Park is the most democratic artistic offering in the world, and we are proud to play our part in bringing New York culture back to vibrant, extraordinary life,” said Artistic Director Oskar Eustis. “We honor Gil Shiva and his family, and Jamie Maleszka. Gil has been an unwavering supporter of The Public for over half a century, a Board Member of grace and insight who has given more to us, and to New York, than we can possibly repay. Jamie Maleszka has been doing the work of angels with The Fortune Society, one of New York’s most impactful nonprofits. The Fortune Society is dedicated to helping people with criminal justice histories and their families and has been a core partner organization of ours since the creation of Public Works. Jamie and Gil are both extraordinary, and we salute them for their hearts, their passion, commitment, and generosity.”

“Each year our Gala is a moment of celebration for all of the people who make The Public’s work possible– our staff, artists, community members, donors, and partners. This year’s Gala feels particularly special as we celebrate 60 years of sharing incredible artistry with all of New York through one of the summer’s most treasured traditions, Free Shakespeare in the Park,” said Executive Director Patrick Willingham. “New York City’s arts and culture organizations continue moving forward with hope and a commitment to a vibrant and equitable future despite the challenges of the pandemic, and we’re especially proud to be making major strides in our plan to revitalize The Delacorte during this anniversary year. It’s a special moment as we ensure that The Delacorte will continue to thrive and serve New Yorkers for generations to come.”

The May Gala will begin with cocktails at 6:00 p.m. in Central Park outside The Delacorte Theater, followed by a three-course dinner beginning at 7:00 p.m EST.

This year, The Public honors the singular Gil Shiva, whose leadership, integrity, and stewardship of the Susan Stein Shiva Foundation have guided The Public Theater for decades.

A long-time Public Theater Trustee and passionate champion of the arts, Shiva’s commitment to a theater that is accessible to all can be felt in every corner of New York City.

The Public will also present its second annual Community Leadership Award to Jamie Maleszka, Director of Creative Arts at The Fortune Society, one of Public Works’ founding community partners and a longstanding Mobile Unit partner.

Maleszka is an extraordinary collaborator with The Public in celebrating and amplifying community artmaking.

Proceeds from the Gala will help support The Public’s mission of providing a home for artists who give voice to the pressing issues of our time, provide free and affordable access to thousands of New Yorkers with Free Shakespeare in the Park and other groundbreaking works, and strengthen the vital relationship between our artists and audiences.

The Public will welcome audiences back to The Delacorte at full capacity this summer.

Proof of a complete COVID-19 vaccination by the date of attendance will be required for access to the facility and theater.

Face masks are not required but are recommended, while in attendance.

Public Theater staff and artists are subject to mandatory vaccination and booster policy, in addition to onsite testing protocols when working within all facilities.

For more information on the health and safety protocols this season, please visit thepublic.nyc/safeinthepark.

THE PUBLIC continues the work of its visionary founder Joe Papp as a civic institution engaging, both on-stage and off, with some of the most important ideas and social issues of today.

Conceived over 60 years ago as one of the nation’s first nonprofit theaters, The Public has long operated on the principles that theater is an essential cultural force and that art and culture belong to everyone.

Under the leadership of Artistic Director Oskar Eustis and Executive Director Patrick Willingham, The Public’s wide breadth of programming includes an annual season of new work at its landmark home at Astor Place, Free Shakespeare in the Park at The Delacorte Theater in Central Park, the Mobile Unit touring throughout New York City’s five boroughs, Public Forum, Under the Radar, Public Lab, Public Works, Public Shakespeare Initiative, and Joe’s Pub.

Since premiering HAIR in 1967, The Public continues to create the canon of American Theater and is currently represented on Broadway by the Tony Award-winning musical Hamilton by Lin-Manuel Miranda and the revival of Ntozake Shange’s for colored girls who have considered suicide / when the rainbow is enuf. Their programs and productions can also be seen regionally across the country and around the world.

The Public Theater stands in honor of the first inhabitants and our ancestors.

We acknowledge the land on which The Public and its theaters stand—the original homeland of the Lenape people—and the painful history of genocide and forced removal from this territory.

We honor the generations of stewards, and we pay our respects to the many diverse Indigenous peoples still connected to this land.

The Public also gives our respect to the people of Seneca Village, a community of Black property owners who were removed from their land and whose village was destroyed in the creation of Central Park. We recognize the sacrifice that these ancestors made and honor Seneca Village’s legacy.

Event Production for GALA ON THE GREEN by Empire.