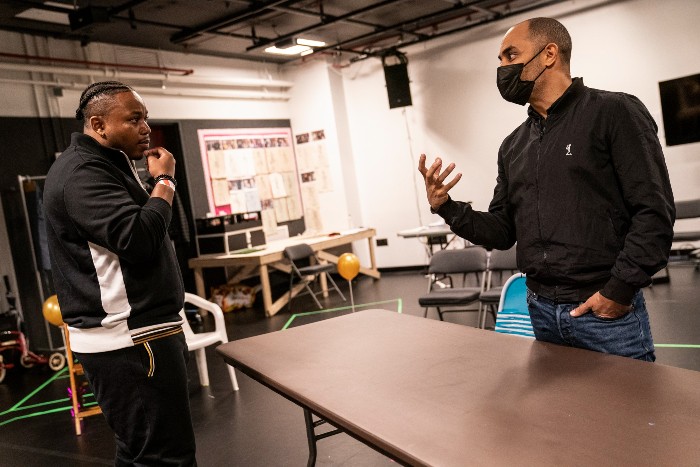 The Public Theater and National Black Theatre (NBT) will begin previews on Thursday, May 12, 2022, for the upcoming New York Premiere of FAT HAM.

Following an exciting and innovative filmed production produced by The Wilma Theater in 2021 during the shutdown, FAT HAM will make its live New York premiere this spring in The Public’s Anspacher Theater.

Juicy is a queer, Southern college kid, already grappling with some serious questions of identity, when the ghost of his father shows up in their backyard, demanding that Juicy avenge his murder.

It feels like a familiar story to Juicy, well-versed in Hamlet’s woes. What’s different is Juicy himself, a sensitive and self-aware young Black man trying to break the cycles of trauma and violence in service of his own liberation.

From an uproarious family barbecue emerges a compelling examination of love and loss, pain and joy.

The Public Theater and National Black Theatre have a long-standing partnership and history of collaboration that dates back to the 1960s.

Most recently, the two organizations co-produced National Black Theatre’s Stage for Healing and Resilience as a part of the Mobile Unit’s Summer of Joy, a pop-up experience around New York City that took place in summer 2021.

FAT HAM reunites the National Black Theatre and The Public in a celebration of Black storytelling and community.

The Public will require proof of a complete COVID-19 vaccination by the date of attendance for access to the facility, theaters, and restaurant.

Boosters are encouraged for those eligible under CDC guidelines, but not required. Approved face masks will be always required, including while watching a performance, with exceptions for attendees in Joe’s Pub and The Library at The Public, who are actively eating and drinking.

For complete health and safety protocols, visit Safe At The Public.

The Library at The Public serves food and drink Tuesday through Sunday, beginning at 5:00 p.m. and closing at midnight. The Library is closed on Mondays.

JAMES IJAMES (Playwright) is a Philadelphia-based playwright and educator. Ijames is the recipient of the F. Otto Haas Award for an Emerging Artist, a Pew Fellow for Playwriting, the Terrence McNally New Play Award for White, the Kesselring Honorable Mention Prize for ….Miz Martha, a Whiting Award, a Kesselring Prize for Kill Move Paradise, and a 2020 Steinberg Prize. He received a BA in Drama from Morehouse College in Atlanta, GA, and a MFA in Acting from Temple University in Philadelphia, PA. Ijames is an Associate Professor of Theatre at Villanova University and a co-artistic director of the Wilma Theater.

TANESHA GARY (Tedra/Rabby Understudy) hails from Chicago, but resides in NY, where her Grammy-nominated choir, Broadway Inspirational Voices, was honored with the 2019 Tony Award for Excellence in Theatre. Gary is a recording artist (original member of Earth Grylz of Capitol Records), Broadway, TV and Film actor. She was part of the original company of Caroline, or Change (Broadway), starred in Lady Day at Emerson’s Bar & Grill (Human Race Theatre), and is the voice of Worm’s Mom in “Bug Diaries” (Amazon).

ALEXANDRIA LEWIS (Opal Understudy) is a recent graduate from NYU Graduate Acting. Her credits there include King Charles III, In the Blood, Rosencrantz and Guildenstern are Dead, and Romeo and Juliet, among others. She has worked with directors such as Mark Wing-Davey, Cristina Angeles, Bob McGraff, Arin Arbus, and Stevie Walker-Webb.

MARCEL SPEARS (Juicy) stars as Cedric the Entertainer’s son “Marty” in the CBS hit-comedy “The Neighborhood.” The popular series was recently renewed for season 5, and is currently airing season 4 which returned on September 20, 2021. In addition to “The Neighborhood,” you may have seen Spears as “T.K. Clifton” on the ABC comedy “The Mayor” and co-starring in the BET film Always a Bridesmaid, on Netflix. Spears was forced out of his hometown of New Orleans by the devastation Hurricane Katrina brought to his beloved city. To this day, his strong affinity for New Orleans remains along with his second home, New York City, where he attended and received a Master of Fine Arts in acting at Columbia University. Spears spent many years delving into theater roles, including the title role of the Classic Stage Company’s production of Shakespeare’s Othello and in A Midsummer Night’s Dream directed by Tyne Rafaeli, for which he was awarded the Rosemarie Tichler Fund Grant for his performance. Spears also played a prominent role in an adaptation of August Wilson’s Ma Rainey’s Black Bottom.

NBT is the longest-running Black theatre in New York City, one of the oldest theatres founded and consistently operated by a woman of color in the nation, and most recently included in the permanent collection of the National Museum of African American History and Culture in Washington, D.C. NBT’s core mission is to produce transformational theatre that helps to shift the inaccuracies around African Americans’ cultural identity by telling authentic stories of Black lifes.

As an alternative learning environment, NBT uses theatre arts as a means to educate, enrich, entertain, empower and inform the national conscience around current social issues impacting our communities.

Located in the heart of Harlem, NBT welcomes more than 90,000 visitors annually; has produced 300+ original works; won an Obie award and 56 Audelco Awards; received a CEBA Award of Merit; and has been nominated for multiple Drama Desk awards.

THE PUBLIC continues the work of its visionary founder Joe Papp as a civic institution engaging, both on-stage and off, with some of the most important ideas and social issues of today.

Conceived over 60 years ago as one of the nation’s first nonprofit theaters, The Public has long operated on the principles that theater is an essential cultural force and that art and culture belong to everyone.

Under the leadership of Artistic Director Oskar Eustis and Executive Director Patrick Willingham, The Public’s wide breadth of programming includes an annual season of new work at its landmark home at Astor Place, Free Shakespeare in the Park at The Delacorte Theater in Central Park, the Mobile Unit touring throughout New York City’s five boroughs, Public Forum, Under the Radar, Public Lab, Public Works, Public Shakespeare Initiative, and Joe’s Pub. Since premiering HAIR in 1967, The Public continues to create the canon of American Theater and is currently represented on Broadway by the Tony Award-winning musical Hamilton by Lin-Manuel Miranda, Girl From the North Country by Conor McPherson and featuring the music of Bob Dylan, and the revival of Ntozake Shange’s for colored girls who have considered suicide / when the rainbow is enuf. Their programs and productions can also be seen regionally across the country and around the world.

The Public Theater stands in honor of the first inhabitants and our ancestors. We acknowledge the land on which The Public and its theaters stand—the original homeland of the Lenape people. We acknowledge the painful history of genocide and forced removal from this territory. We honor the generations of stewards and we pay our respects to the many diverse indigenous peoples still connected to this land.

Public Theater Partner, Supporter, and full-price single tickets can be accessed by visiting publictheater.org, calling 212.967.7555, or in person at the Taub Box Office at The Public Theater at 425 Lafayette Street.

The Public’s Joseph Papp Free Performance initiative will offer free tickets to the performance on Thursday, May 12, 2022, through TodayTix. The Lottery will open for entries on Thursday, May 5, 2022, and will close at 12:00 p.m. Noon on the day of the performance. Winners will be notified by email and push notification anytime from 12:00 p.m. to 4:00 p.m., and if selected, winners will have one 1 hour to claim their tickets.

The American Sign Language Interpreted performance will be at 2:00 p.m. on Saturday, June 4, 2022.

The full performance calendar and complete ticket distribution details can be found at publictheater.org.