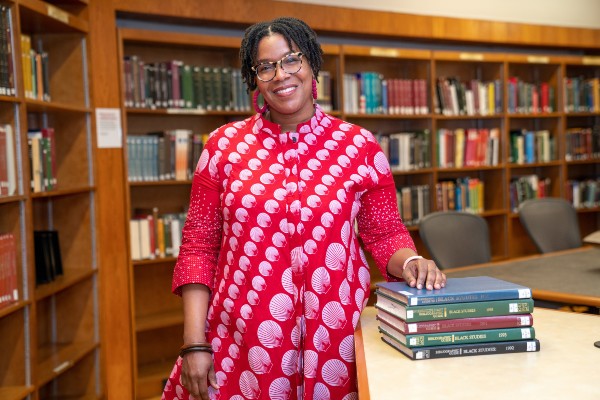 “After a year of unprecedented isolation, during which we saw the centrality of the Black Lives Matter movement, we need to come together again and make sense of what we have lived through,” said Bivins. “The Schomburg Center, with its robust collections and rich legacy, has a key role to play in this moment, bringing people together, facilitating conversations, and continuing to ensure that the perspectives and histories of the Black community and members of the African Diaspora are preserved and understood. In my career, I have worked to help others make sense of history, to make connections between the past and the present, and to help create a true understanding of where we are now and where we are going. I am extremely humbled and thankful for the opportunity to take that expertise and lead the incredible, expert team at the Schomburg Center through this critical moment. I look forward to every minute.”

Bivins—the first woman to lead the Schomburg Center since Jean Blackwell Hutson’s tenure ended in 1980—said she will be focused on making those connections, as well as increasing the visibility of the Center, reaching new patrons, and making the Center’s collections more accessible, both on-site and digitally.

Making those collections as accessible as possible to those in Harlem, in New York City, and beyond must be a priority. It’s one thing to have collections. It’s another to make them accessible, and then another to make sense of what they mean to our current world. That’s what I’m excited to share

“The stories that the Schomburg’s collections tell are so important, and should be shared as broadly as possible,” Bivins said. “Making those collections as accessible as possible to those in Harlem, in New York City, and beyond must be a priority. It’s one thing to have collections. It’s another to make them accessible, and then another to make sense of what they mean to our current world. That’s what I’m excited to share.”

Before joining the Schomburg Center—where as associate director of collections and research services she led the five public service divisions of the Schomburg Center and served as chief curator leading collections processing, acquisitions, and curatorial processes—Bivins served as the chief curator of the International African American Museum in Charleston, South Carolina.

She provided content and design oversight for its inaugural exhibitions. Prior to the IAAM, she was the director of Curatorial Affairs at the Chicago History Museum, where she oversaw and managed its team of curators and historians.

It was during her time at Cornell that she first stepped inside the Schomburg Center—as a student doing research for her thesis in the summer of 2001.

“It’s amazing to think that 20 years after I first visited the Schomburg and was so inspired by its collections and mission that I would get the opportunity to be director,” Bivins said. “It’s such an honor, especially to follow in the footsteps of Jean Blackwell Hutson and the other strong women who shaped and led the Schomburg, against all odds. I am so grateful for the opportunity.”

The Library launched a national search for the position following the January 2021 departure of prior Schomburg Center Director Kevin Young, who left to lead the Smithsonian’s National Museum of African American History and Culture.

“The skill set that Joy has is absolutely critical for the moment that we are in,” said William Kelly, the Library’s Andrew W. Mellon Director of the Research Libraries. “We did an exhaustive search for many months, and it was clear to everyone that Joy brought so much to the table, a unique set of expertise needed at this historic time. This job has so many components. You have to be a librarian. A curator. You need to understand preservation and processing. You need to be a storyteller. You need to understand how to best share stories and present collections. She can do it all. She has been such a caring, inspirational leader over the last extremely challenging year, and I look forward to seeing all that she will accomplish as the director.”

As a research division of The New York Public Library, the Schomburg Center features diverse programming and collections totaling over 11 million items that illuminate the richness of global black history, arts, and culture. Learn more at schomburgcenter.org.

For 125 years, The New York Public Library has been a free provider of education and information for the people of New York and beyond.

With 92 locations—including research and branch libraries—throughout the Bronx, Manhattan, and Staten Island, the Library offers free materials, computer access, classes, exhibitions, programming and more to everyone from toddlers to scholars, and has seen record numbers of attendance and circulation in recent years.

The New York Public Library receives approximately 16 million visits through its doors annually and millions more around the globe who use its resources at www.nypl.org.

To offer this wide array of free programming, The New York Public Library relies on both public and private funding.