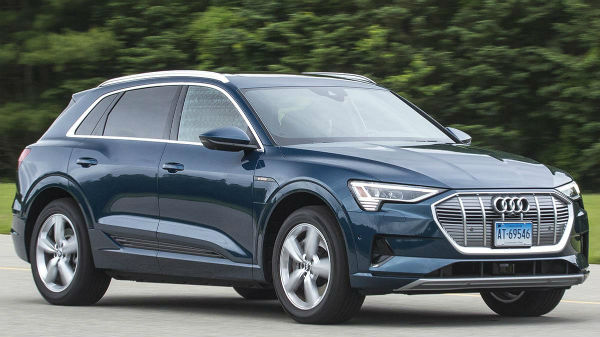 Some people don’t like to drive in Harlem, for those who do Patrick Olsen writes in  Consumer Reports that Audi’s first electric vehicle, the E-Tron, has arrived, and early indications are that it could be a strong competitor in this small but growing category.

The E-Tron joins the Jaguar I-Pace as another EV competitor to Tesla’s established SUV, the Model X. This category will soon get new models from Mercedes-Benz and Porsche, among others.

This Audi is an SUV that seats five adults and gets an EPA-estimated 204 miles of range on a fully charged battery.

Our testers really like the luxury feel of the E-Tron, the smoothness of its powertrain, and how vault-like quiet it is, even at highway speeds (great for the FDR). In fact, there wasn’t too much to complain about.

We’re just putting on its break-in miles before we subject it to our usual regimen of tests. These are our first impressions.

The E-Tron certainly plays to Audi’s strengths. Our testers like the high-quality interior, but that’s expected given the SUV’s relatively hefty price.

The controls are very similar to the Audi A8 sedan we recently bought and tested. We like the two-screen interface, with its dedicated screen for the climate system. In addition, the haptic feedback—the soft pulse on a driver’s fingertip when pressing a button, which mimics the feel of a physical button—helps drivers feel confident they’ve actually completed a task. It does take some practice to master these controls.

The ride absorbs bumps well, and that, in combination with the incredibly quiet cabin and supportive front seats, makes for a very comfortable driving experience. 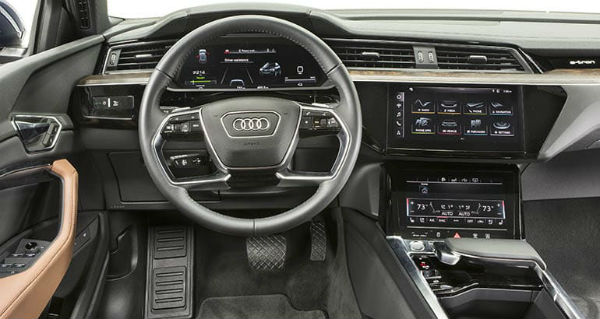 Some of the technology in the E-Tron is needlessly complicated.

Take, for example, the gear selector. It’s a fairly large toggle switch that drivers must move forward or back to select Reverse or Drive. It’s not at all intuitive, and the button to place the SUV in Park sits like a trigger on the side of the toggle. One tester complained that she inadvertently put the car in Park when she didn’t intend to.

In addition, the cover for the charging port is far more complicated than ports on other EVs. On the Kia Niro EV and Nissan Leaf, the port has a simple push-to-open, latched cover. On the E-Tron, it’s powered, and drivers must hit an unmarked button next to the cover to open it. They have to hit the button again to unlock the hose once charging is complete. It’s kind of cool that it’s powered, but it doesn’t need to be, and it may be something that winds up breaking over time.

The E-Tron has a profile that’s similar to the Jaguar I-Pace, with a low, sloping roof that tapers toward the rear. That leads to a couple of visibility problems. The rear window is quite small and the view out the back is limited. Also, the front pillars are very wide and slope down in front of the driver, hurting the view of pedestrians and other objects near the front.

What We’ll Keep Our Eyes On

Unlike some other EVs we’ve recently tested, the E-Tron doesn’t lunge off from a stop; it has a more leisurely rollout. That’s appropriate for a luxury vehicle, but drivers should be aware of it if they try to jump into a line of traffic or merge from a stop. On the plus side, there is no spinning of wheels that we have experienced in some other EVs, such as the Hyundai Kona EV. (Because EVs have so much power right away, their tires can spin faster than they can gain traction.) Once the E-Tron is moving, drivers get smooth and effortless power on demand, at any speed. 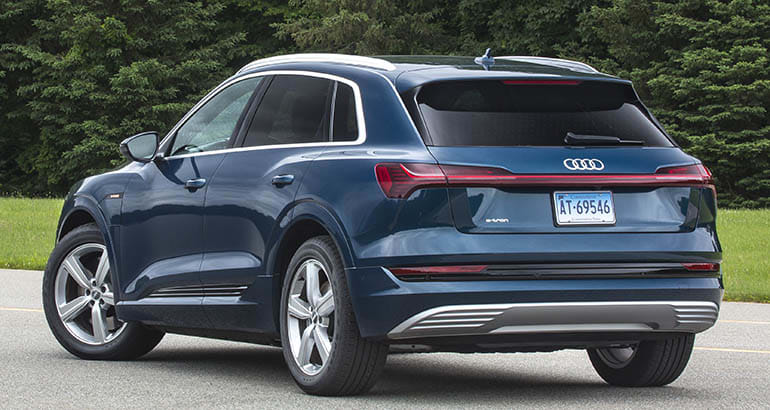 As is the case with other EVs that have large batteries, charging times are very long. When the battery is down to about 15 percent, it has taken about 12 hours to replenish on a 240-volt connector. We’ll also try charging the E-Tron through DC fast charging. Those outlets remain sparse, but they’re likely to be more prevalent in the next few years.

The E-Tron has an air of maturity that exudes quality, and it’s likely because it comes from an established luxury automaker. On the other hand, its appearance doesn’t scream “I’m electric” the way that Teslas do, and that may not be enough to draw in EV enthusiasts.

It’s early yet, but so far our testers have liked what they’ve experienced with the E-Tron. The combination of luxury touches, a smooth powertrain, intuitive controls, and a quiet, comfortable ride make this a strong competitor.

We’ll see how it holds up through our testing.

Patrick Olsen. I’ve been a journalist for decades, and I got my love of cars from growing up in Los Angeles, where you have to drive, even if you’re just going a few doors down the block. I’m a huge movie, music, and TV fan, and really just a devotee of good storytelling. Via Consumer Reports.