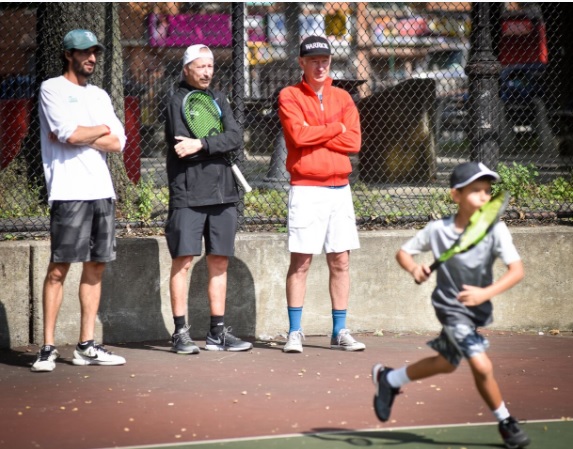 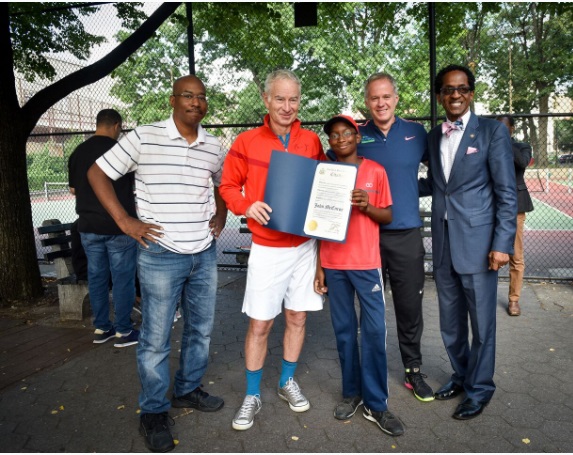 The tryout took place at Harlem’s Frederick Johnson Playground Tennis Courts at Adam Clayton Powell Jr., Boulevard @ West 150th Street, home to its own popular summer recreational tennis programs. Watching and cheering on the young players was ten-year-old Joshua Bey, who won a scholarship to JMTA at last year’s tryout. Joshua’s family lives within blocks of the park, and his mother and father, who came out for today’s event, spoke highly of their son’s experience at JMTA this past year. 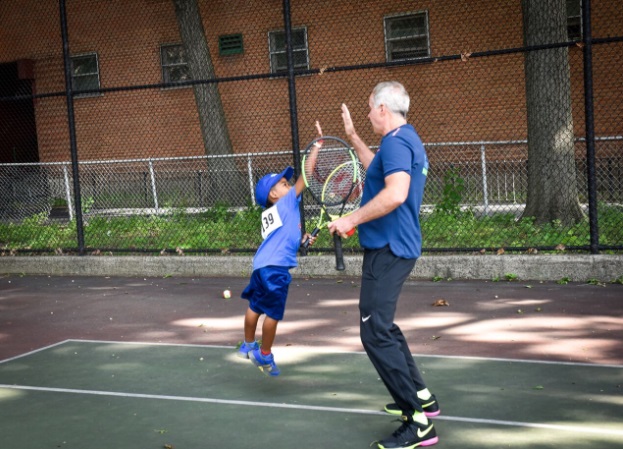 Youngsters from SPORTIME Randall’s Island’s neighboring communities, including East Harlem and the South Bronx, were encouraged to attend and many turned out to display their tennis and athletic prowess. Players participated in tennis and athletic drills and games designed by SPORTIME/JMTA coaches to assess capacities such as speed, strength, agility and hand-eye coordination. 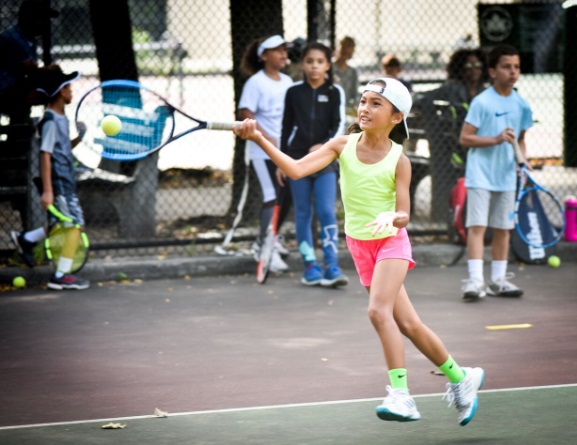 “My brother and I are NYC natives,” said Patrick McEnroe, “To be able to expose young people in our City to this great sport, and to give them a chance to use tennis as a vehicle to improve their lives, is a true privilege.” 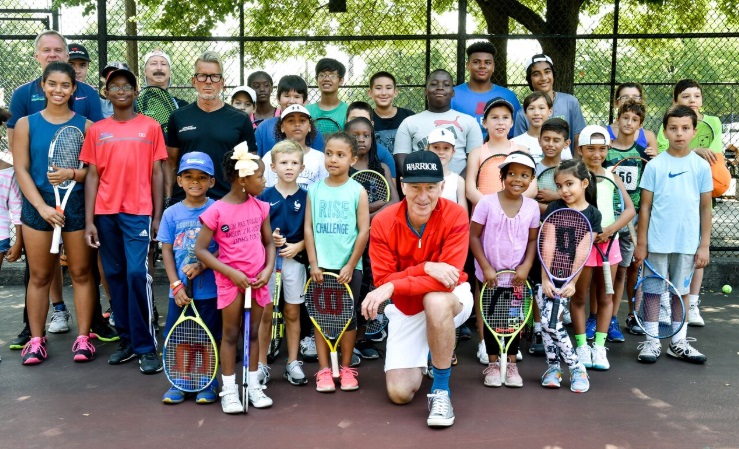 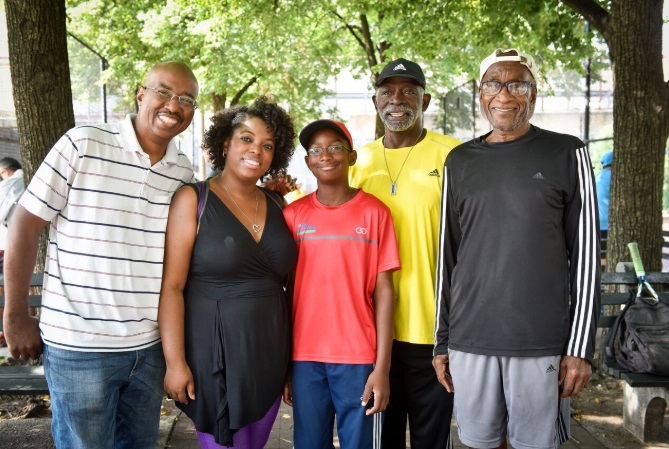 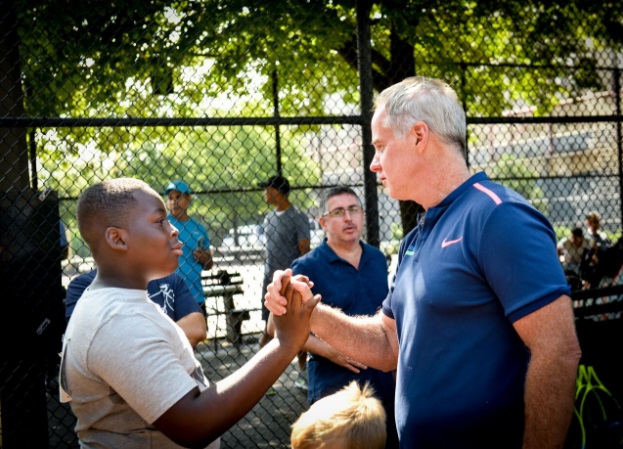 JMTA Co-Tennis Director Lawrence Kleger said, “We want to engage young, athletic, talented children and introduce them to the world of tennis with the intention of fostering long-term participation. We want to reward these kids’ hard work while nurturing their talent. These scholarships serve as a reminder for the kids that the JMTP and JMTA are as committed to them as they are to the sport of tennis.”

Mike Jacobs, co-director of Fredrick Johnson Playground’s popular free summer community tennis program affiliated with Columbia University, said, “Tennis gives the kids motivation and focus, and it teaches them to think analytically, and sharpens decision making skills. It prepares them well for life. We love working with SPORTIME and the Johnny Mac Tennis Project, which is giving the really talented kids a great option.”

Also present this morning was local NY State Assemblyman Al Taylor, who praised the local tennis program and SPORTIME and JMTP’s support of tennis at the community level. 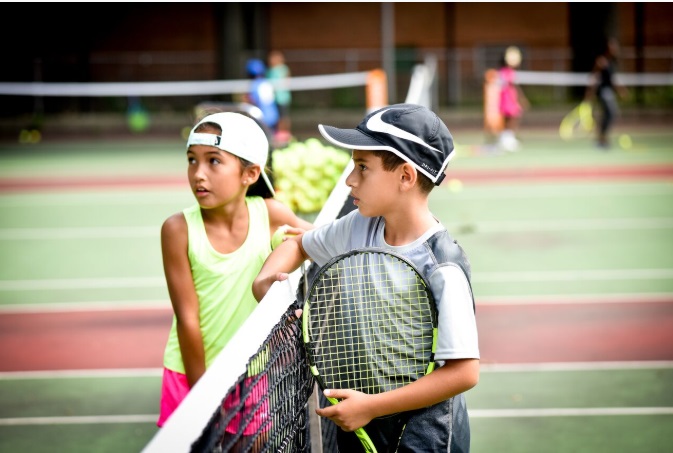 JMTA coaches evaluated participants with an eye toward tennis skill level, athleticism and enthusiasm for the sport. A JMTP scholarship to attend JMTA, which will be awarded once coaches have compared data gathered at the tryout, will cover group sessions, individual instruction, training camps, integral performance training and mental toughness workshops, as well as convenient transportation to SPORTIME Randall’s Island.

Since JMTP’s founding in 2012, over 5,000 East Harlem and South Bronx youth living in the communities adjacent to Randall’s Island have enjoyed the sport of tennis through free, school-based, programs offered at the SPORTIME/JMTA facility. In addition, JMTP and SPORTIME have awarded over 250 scholarships to children who live in those communities, many of whom were introduced to the sport through JMTP programming, as well as to others throughout the city.

A non-profit based at SPORTIME Randall’s Island, JMTP was created to remove social and economic barriers to tennis participation for NYC kids, and to bridge the gap between introductory community-based programs and advanced tennis training for talented and committed players. JMTP provides a pathway to success through tennis, often leading to college scholarships, careers in the industry and, for a few, professional tennis careers. 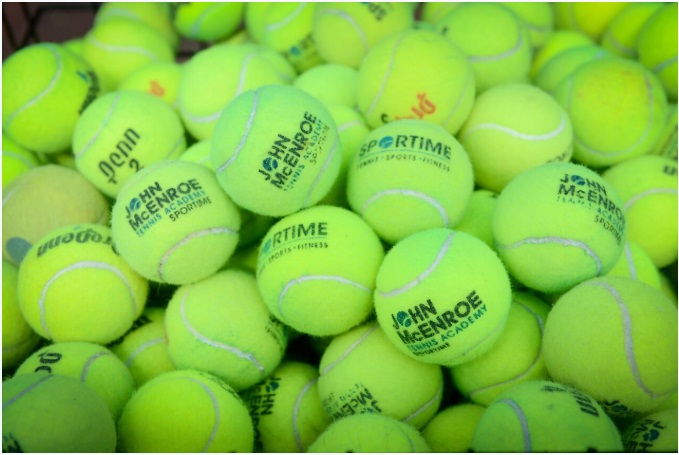 The program is supported by donations, as well as by events like this coming weekend’s Johnny Mac Tennis Project Pro-Am at SPORTIME Amagansett. On Saturday, August 25th, John and Patrick McEnroe will be joined by all-time greats Lindsay Davenport, Chris Evert and Martina Navratilova, and other former pros including Andrea Jaeger and Ashley Harkleroad, at the nonprofit’s fourth annual fundraising event at SPORTIME Amagansett, at 320 Abrahams Path, Town of East Hampton.