The Major, Uptown’s Rodriguez And Others Call For Design-Build Authorization For Infrastructure Projects 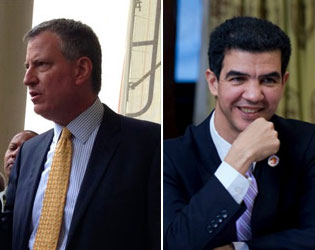 Agency officials and members of the de Blasio administration gathered at the Whitehall Terminal of the Staten Island Ferry to urge the Governor to sign the NYC Design-Build Act. The legislation would save the City $300 million dollars of 49 key projects—including the Staten Island Ferry—by expediting the construction of vital public infrastructures such as libraries, bridges, firehouses, and schools. There is no cost to the State.

“Throughout our city, we have serious infrastructure needs that cannot wait for a crisis. It is critical we address these issues right away and in the most cost-effective way possible,” said Mayor Bill de Blasio. “Design-build authority would save us time and money, meaningless red tape and more libraries, roads, and bridges in communities across our city. Design-Build has been invaluable for the State, it can and should be for the City too.”

If enacted, this legislation would accelerate roof and boiler repairs for NYCHA residents, expedite the opening of libraries, parks buildings and schools, reduce traffic by enabling the City to complete road, water and sewer projects faster, while also making the City government more efficient. City agencies have identified 49 projects which could benefit from the design-build method, including:

Reconstruction of Belt Parkway Bridges: NYC DOT will reconstruct a series of bridges on the Belt Parkway at Sheepshead Bay Road, Ocean Avenue, Bedford Avenue and Nostrand Avenue. The project is estimated to cost up to $155 million, and design-build may save more than $9 million while also expediting completion of the project.

NYPD Property Clerk Facility: DDC will construct a modern replacement for the outdated, undersized and environmentally vulnerable evidence storage facilities currently spread out along various sites throughout the boroughs of NYC. This project is expected to cost more than $423 million if built according to the design-bid-build system; design-build could save more than $8 million, but also help ensure that this project’s’ various technological components are well-integrated.

Staten Island Ferry Resiliency Upgrades: Superstorm Sandy caused significant damage to the passenger terminal and ferry maintenance facilities in Staten Island and Manhattan. The City made temporary repairs, but permanent resiliency measures are required to protect these facilities from storm surge flooding, high winds, and rising sea levels. Design-build is projected to save $3 million from the project’s $57 million estimated costs, but could also prevent construction from disrupting the 24/7 operation of the Ferry for the tens of thousands of daily passengers.

“Signing the NYC Design-Build Act into law will enable New York City to complete projects quicker, more often under budget, and cut through the red tape that has often blocked us from putting together the best design and construction teams,” said Deputy Mayor Laura Anglin. “We have seen the positive results design-build can yield not only across the country but throughout New York State, which is why we need to bring this authority to New York City.”

“Design-Build legislation is important to NYC Health + Hospitals because it will expedite our ability to create new health care access points for communities in need. It will also reduce the cost of construction, allowing us to reinvest those savings into these new services for our patients,” said Mitchell Katz, MD, President, and CEO of NYC Health + Hospitals.

“Around the state, country, and the world, we have seen that design-build projects get completed with greater speed and efficiency,” said DOT Commissioner Polly Trottenberg. “For us at DOT, the authority would not only help us fortify both Staten Island Ferry terminals, but would also help us tackle other enormous capital projects – including rebuilding major bridges along the Belt Parkway near Coney Island and a major administration building in Willets Point, Queens. Taken together, design-build for these projects would have a measurable impact, saving New York City taxpayers over $20 million and months of inconvenience during construction.”

“Design-build will allow us to complete construction projects faster and to use taxpayer dollars more efficiently,” said NYC Department of Design and Construction Commissioner Lorraine Grillo. “The State already uses it, including here in New York City, and the City has been given very limited permission to use it for a handful of important projects. We need the authorization to use it more broadly – including for libraries, firehouses and critical infrastructure – and we need it now, so we can save time and money on important projects that are starting soon.”

“Design-Build legislation would be a great step towards reducing project timelines for our park building projects,” said NYC Parks Commissioner Mitchell J. Silver, FAICP. “Reducing capital project timelines, at Parks and our sister agencies, would be cost-effective and get New Yorkers back into their much-utilized park buildings faster and more efficiently than before.”

Design-build has a proven track record of saving taxpayer money and speeding up vital infrastructure projects,” said State Senator Liz Kreuger. Our State government has been benefitting from design-build for several years—it is long past time to give New York City the discretion to use this model as well. This legislation has passed with an overwhelming bipartisan majority because it is a smart, efficient policy. I urge the Governor to sign it into law.”

“I am proud to have sponsored A.7636, which will permit the City of New York to expand the use of the design-build project delivery method,” said Assembly Member Edward C. Braunstein. “When enacted, this legislation will allow the City of New York to save hundreds of millions of dollars and speed up the timeline on numerous projects. I am hopeful Governor Cuomo will sign this bill into law by the end of the year.”

“New York City’s infrastructure needs are immense and design-build will help expedite project delivery on major projects in every district across the city,” said Assembly Member Steven Cymbrowitz. “It’s time for New York City to catch up to the rest of the country, where design-build is used widely.”

“Design-build will save time and money by merging design and construction bids, usually bid separately on massive projects, said Assistant Assembly Speaker Felix W Ortiz. “Approval of this legislation makes sense. We’ve got to rebuild our roads with flexibility.”

“The deteriorating conditions of NYCHA’s public housing stock is a perfect example for the urgent necessity of Design-Build to efficiently and quickly complete public projects,” said Assembly Member Robert Rodriguez. In this case, public housing tenants cannot keep waiting years for capital repairs that can be tangled up in the bureaucracy of traditional project deliveries. Taxpayers can save hundreds of millions of dollars, and the State can quickly provide the quality of life improvements that New Yorkers deserve.”

“This design-build legislation will ensure that we act effectively and swiftly with our public infrastructure projects. The impacts of climate change have left many of our waterfronts vulnerable and exposed to future storms” said Council Member Ydanis Rodriguez, Chairman of the Transportation Committee. “The design-build bill is set to save the City millions of dollars while also ensuring that we complete awaiting projects in a timely manner. I will continue working with the DOT Commissioner Polly Trottenberg and DDC Commissioner Lorraine Grillo to ensure that we get these projects completed as soon as the time allows.”

“We have a responsibility to taxpayers to ensure that we invest in infrastructure that provides the greatest possible benefit at the lowest possible cost. To do that, we need to be able to utilize design-build,” said Council Minority Leader Steven Matteo. “Design-Build is the most cost-efficient way to deliver large-scale infrastructure projects in the fastest amount of time with the highest quality. I join my colleagues in government in calling on the Governor to sign design-build authorization legislation today.”

“New York needs to join other world cities in figuring out how to build major projects on time and budget. Design-Build may reduce costs and construction timelines, and we hope it can be employed for some of New York City’s biggest challenges such as restoring NYCHA and fixing our transportation network,” said Tom Wright, President and CEO of Regional Plan Association.

“Design-build can reduce costs and speed project completion on critical transportation infrastructure projects such as reconstructing bridges on the Belt Parkway”, said John Corlett, Legislative Chairman for AAA New York State, which represents more than 2.8 million members. “Drivers that use the Belt Parkway every day are not concerned about the nuances of the procurement process. However, they do want road reconstruction and improvements done expeditiously, safely, and economically. NYC DOT estimates that it can reduce construction time by nearly two years and save over millions of dollars with design-build on that project alone. Accordingly, AAA strongly supports granting New York City authorization to utilize design-build on the Belt Parkway and other critical infrastructure projects and urges the Governor to sign this legislation”.