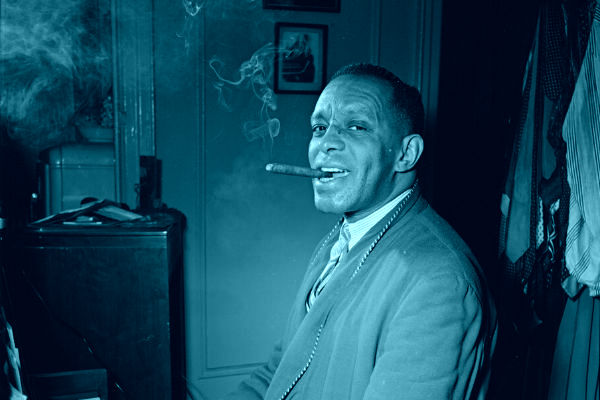 Usually grouped with James P. Johnson and Thomas “Fats” Waller as the three greatest practitioners of the genre in its golden age, from about 1920 to 1943, and into the 1950’s.

William Henry Joseph Bonaparte Bertholf was born in Goshen, New York. His mother and grandmother chose the names to reflect the different parts of his heritage: Joseph after Saint Joseph (Bible), Bonaparte (French), Bertholf (biological father’s last name), Smith (added when he was three, his stepfather’s name), and William and Henry which were added for “spiritual balance”.

Willie was at least somewhat conversant in Yiddish, as he demonstrated in a television interview late in his life. Willie’s mother, Ida Oliver, had “Spanish, Negro, and Mohawk Indian blood”.

“Frank Bertholoff [sic] was a light-skinned playboy who loved his liquor, girls, and gambling.”

Her mother, Ann Oliver, was a banjo player and had been in Primrose and West minstrel shows (Smith also had two cousins who were dancers in the shows, Etta and John Bloom). According to Ida, “Frank Bertholoff [sic] was a light-skinned playboy who loved his liquor, girls, and gambling.”

His mother threw Frank out of the house when “The Lion” was two years old. When his father died in 1901, his mother married John Smith, a master mechanic from Paterson, New Jersey. The surname Smith was added to that of “The Lion” at age three. He grew up living at 76 Academy Street in Newark, New Jersey.

John Smith worked for C.M. Bailey, Pork Packers, and he would leave the house around midnight to pick up the freshly killed pigs and bring them to the packing house. He was supposed to be home by 4 am, but would usually go to bars.

Eventually, Willie’s mother wanted him to accompany his stepfather to work to hopefully ensure that John Smith would come straight home and not go drinking. Willie said he actually enjoyed his job, but most of the time he would have to drive the horses home.

He also could only work on Fridays and Saturdays, as his mother did not want him to miss school. He wrote about the experience of being at the slaughterhouse with his stepfather:

I couldn’t stand to see what I saw at the slaughterhouse. I would watch wide-eyed as the squealing pigs slid down the iron rails to the cutter where they were slashed through the middle, with the two halves falling into a tank of hot water.

The kill sometimes went to as many as four hundred pigs a night. It was a sickening sight to watch. But the cries from the pigs brought forth an emotional excitement. It was another weird but musical sound that I can still hear in my head.

The squeaks, the squeals, the dipping them in hot water, they put them on a hook, take off the head, the legs, going down an aisle—I hear it on an oboe. That’s what you hear in a symphony: destruction, war, peace, beauty, all mixed.

In 1907, the family moved to 90 Bloome Street in Newark but moved again around 1912. His stepfather got a new job at Crucible Steel Company, across the Passaic River in Harrison, New Jersey. The job paid more, and Willie would have to get him before his bosses got him drunk on his own money.

He attended the Baxter School, rumored to be a school for bad children. The school was notorious for brawls between Irish, Italian, and African-American children.

Willie was in Mrs. Black’s fruit store and was caught with his hand in her register. According to Smith’s memoirs, he had wanted to borrow a dime to see S.H. Dudley’s traveling roadshow at Blaney’s Theater.

The thing that shocked Willie the most was the fact that she turned him over to the police. Mrs. Black’s son-in-law was the number three tough guy in Newark, and their whole family hated policemen and wouldn’t allow them into their store.

Willie later wrote, “But they sure didn’t mind turning over a 10-year-old boy to the police.” He went to the children’s court and was sentenced to a ten-dollar fine and probation.

After that incident, he was transferred to Morton School and began sixth grade at his new school (which had a lot less brawling). He would go on to attend Barringer High School (then known as Newark High School).

In an effort to get the attention of the ladies, he attempted sports including swimming, skating, track, basketball, sledding, cycling, and boxing. He learned to swim in the Morris Canal.

Prizefighting was the sport he was most interested in. Willie says that “maybe that because I’ve known most of the great fighters from way back. They liked to visit the night clubs … “.

Fitzsimmons owned a saloon on Market Street in Newark, and that is where Willie learned about Stanley Ketchel, Kid McCoy, Benny Leonard, Jimmy Britt, and Charlie Warner.

Willie also belonged to a gang, and the gang had a club called The Ramblers (two members were Abner Zwillman and Niggy Rutman). Willie was one of two black men in the gang, the other being Louis Moss, who Willie referred to as a “sweet talker, who could take his foes apart”.

Moss later became known as “Big Sue” and owned a saloon in Tenderloin, Manhattan. Moss was his own bouncer at his club (according to Willie, Moss was 6’4″ and about 240 pounds). Willie says he used to help him out by playing piano in his backroom.

When Willie was about six, he went downstairs to the basement of his Academy Street home and found the organ his mother used to play.

It was not in good shape, and nearly half of the keys were missing. After his mother discovered his interest in the instrument, she taught him the melodies she knew.

One of the first songs he learned was Home! Sweet Home!. His uncle Rob, who was a bass singer and ran his own quartet, would teach Willie how to dance. Willie entered an amateur dance contest at the Arcadia Theater and won first place and the prize, ten dollars. After that, he focused more on playing music at the clubs.

Willie had wanted a new piano very badly, but every time he thought his mother was able to afford it, there was a new mouth to feed. Willie got a job at Hauseman’s Footwear store shining shoes and running errands, where he was paid five dollars a week.

“Old Man” Hauseman paid that much because he liked the fact that Willie could speak Hebrew and also because Willie wanted to buy a piano with the money. As it turned out, Marshall & Wendell’s was holding a contest: the object was to guess how many dots there were in a printed circle in their newspaper advertisement.

Willie used arithmetic to help guess the number, and the upright piano was delivered the next day. From that day forth, he sat down at the piano and played.

He would play songs he heard in the clubs, including Maple Leaf Rag by Scott Joplin, Cannonball Rag by Joe Northrup, Black and White Rag by George Botsford, and Don’t Hit that Lady Dressed in Green, about which he said “the lyrics to this song were a sex education, especially for a twelve-year-old boy”.

His other favorites picked up from the saloons were She’s Got Good Booty and Baby, Let Your Drawers Hang Low.

By the early 1910s, he was playing in New York City and Atlantic City, New Jersey. Smith served in World War I, where he saw action in France and played drum with the African-American regimental band led by Tim Brymn. He also played basketball with the regimental team.

Legend has it that his nickname “The Lion” came from his reported bravery while serving as a heavy artillery gunner. He was a decorated veteran of the 350th Field Artillery the famous Harlem Hellfighters, a regiment of the Buffalo Soldiers.

Legend has it that his nickname “The Lion” came from his reported bravery while serving as a heavy artillery gunner. He was a decorated veteran of the 350th Field Artillery the famous Harlem Hellfighters, a regiment of the Buffalo Soldiers.

Around 1915, he married Blanche Merrill (née Howard). Smith and Merrill are thought to have separated before Smith joined the army in 1917, serving as a corporal (he claimed sergeant was his rank), but were still living together in Newark, New Jersey at the time of the 1920 census. Merrill was white and Smith was the only black man living in their apartment building at the time.

He returned to working in Harlem clubs and in rent parties, where Smith and his contemporaries James P. Johnson and Fats Waller developed a new, more sophisticated piano style later called “stride”.

Smith became a major part of the Harlem jazz scene. He was considered one of the “big three” of stride piano along with James P. Johnson and Fats Waller developed a new, more sophisticated piano style later called “stride”.

Smith had 10 brothers and a sister (including half-siblings). His older brother Jerome died at the age of 15. His other older brother, George, became an officer in Atlantic City and died in 1946. Willie said of George, “Our paths didn’t cross very often in later life. His friends and connections were always on the other side of the fence from mine.”

His half-brother Robert owned a bar on West Street in Newark. His half-brother Melvin lived on Mulberry Street in Manhattan. Smith had no idea what became of his other two half-brothers, Norman and Ralph. All of the other siblings lived to the ages of three to seven.

According to Smith, Frank Bertholf (cited as Bertholoff in his autobiography), his birth father was Jewish. As a boy, he delivered clean clothes to his mother’s clients, including to a prosperous Jewish family who invited him to sit in on Hebrew lessons on Saturday mornings.

Willie was Bar-Mitzvahed in Newark at age thirteen, and later in life worked as a Hebrew cantor for a Black Jewish congregation in Harlem.

In his later years, he received frequent honors for his life’s work including a Willie “The Lion” Smith Day in Newark, New Jersey. Smith died at the age of 79, on April 18, 1973, in New York.

The liner notes of his 1958 LP The Legend of Willie “The Lion” Smith (Grand Awards Records GA 33-368) state: “Duke Ellington has never lost his awe of Lion’s prowess.”

It quotes Ellington as saying, “Willie The Lion was the greatest influence of all the great jazz piano players who have come along. He has a beat that stays in the mind.”

This LP is also noted for its album cover, featuring a painting of the Lion by Tracy Sugarman. Ellington attested to his admiration when he composed and recorded the highly regarded “Portrait of the Lion” in 1939.