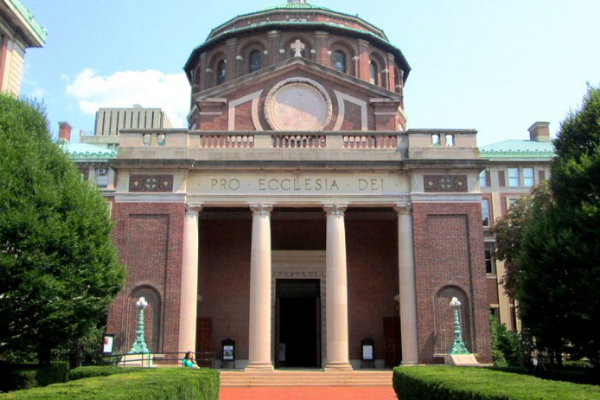 St. Paul’s Chapel, on the Morningside Heights campus of Columbia University in Harlem, New York, is an Episcopal church built in 1903-07 and designed by I. N. Phelps Stokes, of the firm of Howells & Stokes.

The exterior is in the Northern Italian Renaissance Revival style while the interior is Byzantine.

The chapel’s exterior of red brick with limestone trim – with terra cotta and bronze ornamentation – fits in with the original McKim, Mead buildings on the campus. The building’s dome stands 91 feet above the ground and was possibly the first self-supporting dome in an American church. The 24 windows around the drum of the dome carry the names of prominent New York families connected with the university, such as Philip Van Cortlandt, DeWitt Clinton, and William C. Rhinelander. The entablature on the chapel’s front facade is PRO ECCLESIA DEI, meaning “For the Assembly of God”. The wrought-iron gates in front came from the North Reformed Dutch Church, which closed in 1875. 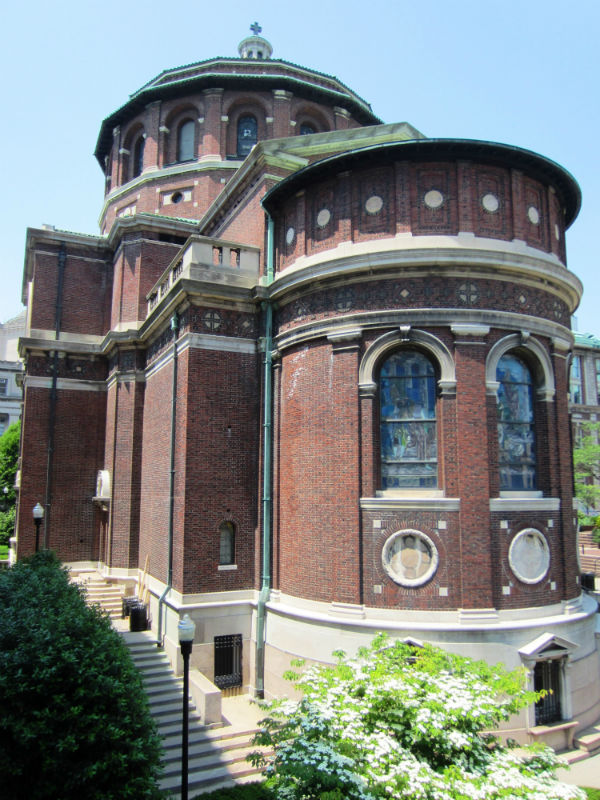 The chapel has “sonorous” acoustics, which makes it an excellent venue for the long-running concert series “Music at St. Paul’s”, and its Aeolian-Skinner pipe organ is renowned for its fine tone.

Many religious groups use the chapel throughout the week for their meetings; it hosts over 600 religious services each year for a variety of faiths. Several non-religious student groups also use the chapel. The most notable of these is the student magazine The Blue and White and the Postcrypt Coffeehouse, a folk music venue featuring live music weekly. The coffeehouse has been called perhaps “the most haunting (not haunted) performance space in the City.”

The basement of the chapel houses the Postcrypt Art Gallery. At commencement, the university uses St. Paul’s for a Baccalaureate Service to commemorate graduates’ achievements. The chapel is also popular for weddings.

In 1969 some parts of the song “The Boxer” by Simon and Garfunkel were recorded in the chapel.

Judy Collins recorded her a cappella arrangement of “Amazing Grace” in the chapel for her 1970 album Whales & Nightingales, relying heavily on its acoustic reverberation effects.