The Legendary “St. Patrick’s Of Harlem” The Church Of All Saints In Harlem NY 1883 – 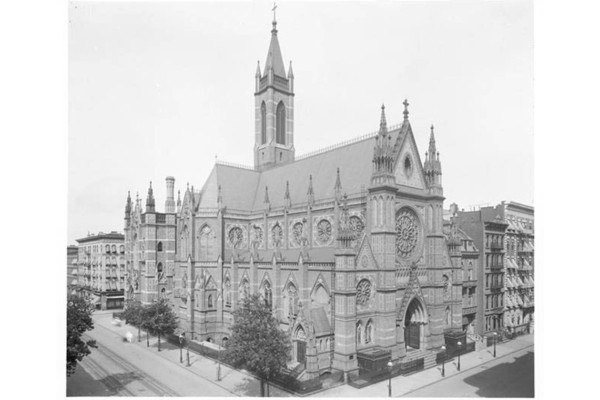 in the Roman Catholic Archdiocese of New York, located at 47 East 129th Street, at the corner of Madison Avenue, Harlem, NY.

Built from 1883-1886 and designed by architects Renwick, Aspinwall and Russell – but attributed by historian Michael Henry Adams directly to James Renwick, Jr. – the church complex includes a parish house (1886–89) as well as a school (1902) designed by Renwick’s nephew, William W. Renwick.

The parish was established in October 1879, under the supervision of the Rev. (later Monsignor) James W. Power, a native of Ireland, who was its first pastor.

The parish was originally intended for the neighborhood’s Irish immigrants. As the neighborhood has changed, the parish today is predominantly African-American and Nigerian. It is currently staffed by the Franciscan Friars.

All Saints is known as the “St. Patrick’s of Harlem” because of its size and design, the Gothic Revival, or alternatively Venetian Gothic, a brick church with terracotta trimming was dedicated in 1893.

The design is festooned with rose windows in the clerestory and a prominent bell tower. “The vaulted interior is also rich in details, including comfortable hand-carved pews, murals and stained glass.” 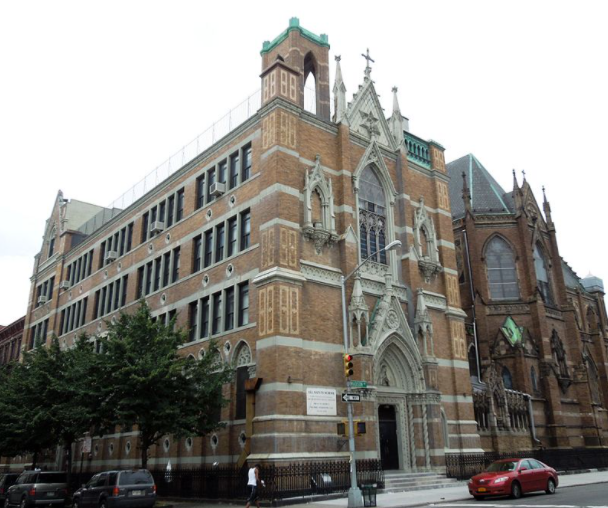 The parish school was built by Power soon after the church, and was initially run by the Christian Brothers of Ireland, who were brought by him to educate the children of Irish immigrants, and the Sisters of Charity of New York.

The school’s enrollment in its early years reached almost 2,000 students, mostly girls. Within the parish, the Sisters also operated All Saints Academy, which taught 120 high school students, and the Brothers operated All Hallows Collegiate Institute for boys.

Additionally, a Home for Working Girls was run by the Franciscan Missionary Sisters of the Sacred Heart.

All Saints School was among 27 schools closed by Archbishop Dolan in the Archdiocese of New York on 11 January 2011.