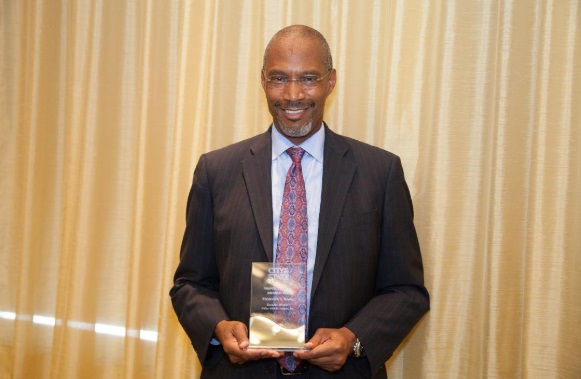 On July 17th, the Police Athletic League and Executive Director Frederick Watts were honored for their great work from Harlem to Hollis at City & State’s Protecting New York Summit and Awards held at Baruch College. The day-long event offered industry executives, public sector leaders and academics the opportunity to share ideas about how to discuss New York’s security strategy from elections to community policing and the tools needed to be recognized as a national leader in homeland security and emergency management. The Summit focused on insights and perspectives across industries within New York’s public safety and security initiatives and programs.

The Keynote address was presented by James O’Neill, NYPD Commissioner and PAL Honorary President, with an introduction by Paul Tierney, Senior Vice President of Public Sector State and Local Government, Dataminr. Panel sessions covered “Maximizing New York’s Security” and “Government’s Integrity in the Post-Truth Era” and addressed a wide range of topics including “How has New York fared in emergency responsiveness as well as in counterterrorism planning and prevention?” and “What is the connection between elections technology and security?”

PAL’s Executive Director Frederick Watts was recognized at the awards ceremony. He acknowledged the great work of the PAL staff and urged the Summit participants to view PAL’s youth development programs as not only contributing to a safer, better New York, but as essential to providing City youth with equal opportunities for growth and success. Other honorees at the Summit included: Nada Marie Anid, VP, Strategic Communications and External Affairs, New York Institute of Technology; Lenora B. Fulani, PhD., Co-Founder, All Stars Project, Inc., and Naomi Ryan, Executive Director, Reisenbach Foundation.