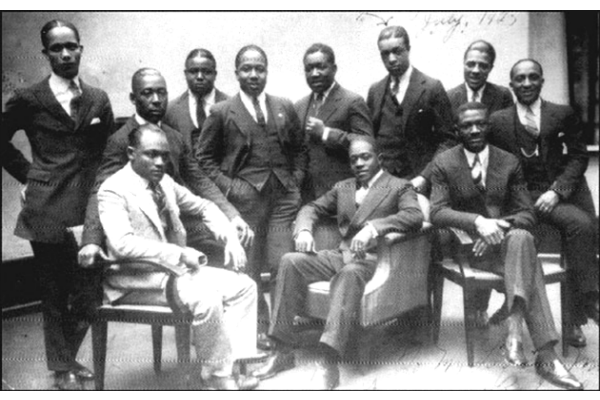 The Nest Club was a cabaret in Harlem, more specifically an after-hours club, at 169 West 133rd Street – a street known then both as “Swing Street” and “Jungle Alley”.

The club was two doors east of Seventh Avenue, downstairs.

The club flourished through 1933.

The club faced a formidable challenge to its s viability following the Great Crash of October 1929, followed by the Great Depression that bottomed around March 1933.

The Nest Club, 100 feet east of Seventh Avenue, opened in 1923 with a Leonard Harper revue and Sam Wooding’s band.

Performers, dressed in bird costumes, did a routine in the theme, “Where do the birds go every night? To the nest! To the nest!”

Dance historian Jacqui Malone, in her 1996 book, Steppin’ on the Blues: The Visible Rhythms of African American Dance, explained that, at the Nest Club, floor shows were less elaborate than those of larger venues while the emphasis was on the music.

A barbecue restaurant, owned and operated by Carey and Frazier, occupied the ground floor.

In 1924, Carey and Frazier also opened on October 23, 1924, and operated the Bamville Club in Harlem at 65 West 129th Street, 2 doors east of Lenox Avenue – where blacks and whites danced in mixed couples.

Carey and Frazier, later, owned and operated the Saratoga Club, on Lenox at 140th Street, which had been founded by Casper Holstein (1876–1944).

Microphones to amplify vocalist were not yet used in Harlem nightclubs.

Mae Barnes, a singer, and dancer reminisced about the first time she heard Eleanora sing. Both she and Eleanora had been performing at the Nest. Barnes said, “Billie wasn’t doing her own style. She was doing everything that Louis Armstrong was doing. She knew his records backward… She wasn’t imitatin’ his style, she was using all his numbers. That was her beginnin’ of changing Louis’s style to her own … ”

She had this heavy voice, this gravelly tone.

While at the Nest Club, Eleanora changed her name to Billie Holiday, drawing on the pseudonym of one her favorite actors, Billie Dove, and the surname of her father, Clarence Holiday.

Side note: Music writer Donald Clarke avers that Holiday adopted her first name from a jazz vocal team, Billie Haywood (1903–1979) and Cliff Allen who had been singing at a Harlem venue.

Haywood was, according to Barnes, a hell of a rhythm singer.

In 1925, the Nest Club Orchestra, directed by Billy Butler, nationally broadcast their performances Tuesday and Saturday evenings, 11:30 to midnight, from host WFBH, a short-lived Manhattan radio station in existence from July 15, 1924, to November 6, 1926.

During Prohibition, many cabarets across the country were speakeasies.

And, at the time, many in Harlem’s Swing Street district have been chronicled as having been controlled by organized crime.

The extent to which the Nest Club operated (i) as a speakeasy or (ii) under the duress of organized crime is not well-chronicled.

However, Michael Aloysius Lerner, in his 2007 book, Dry Manhattan: Prohibition in New York City, pointed out that the Amsterdam News and the New York Age both argued that cabarets in Harlem had been unfairly targeted by prohibition enforcement officers.

Yet, not a single venue in Harlem had been padlocked until September 1928, when the Nest Club was closed for violating the Volstead Act.

When Police Commissioner Grover Whalen ordered a massive citywide crackdown on speakeasies in 1929, 45 of the 786 clubs were in Harlem, a ratio that, according to Lerner, “suggests Harlem was neither ignored nor specifically targeted.”

In 2015, on the same lot with the same address, a newly erected six-story, 10,385 square feet, healthcare clinic named “The Nest” opened under the auspices of Harlem United, a New York non-profit founded in 1988 during the throes of the HIV/AIDS epidemic in New York.

The Nest has exam rooms, dental operatories, a floor dedicated to behavioral health, and a floor for pediatric care.

The staff uses the facility to offer primary care for the lesbian, gay, bisexual, queer, and transgender community as well as provide treatment and care for individuals with viral hepatitis.

In the early days at the Nest Club, gangsters would come in at three o’clock in the morning and they’d hang there until 10 or 11 o’clock in the next day . . . sitting there and requesting numbers and passing out money.— Charlie Holmes, saxophonist

The sole purpose of these clubs, according to Malcolm X, was ‘to entertain and jive the white night crowd to get their money’