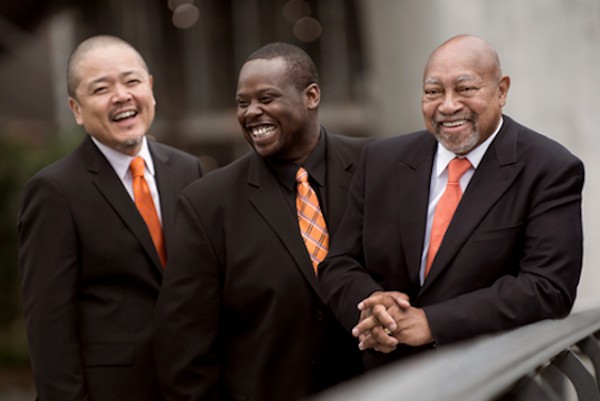 “One of the top jazz pianists in the world” (The Los Angeles Times), the NEA Jazz Master Kenny Barron makes his long-overdue Miller debut with the trio he has been leading for the last decade. Don’t miss the chance to experience the American Jazz Hall of Fame inductee who mesmerizes audiences with his lyrical melodies and infectious rhythms.

Honored by The National Endowment for the Arts as a 2010 Jazz Master, Kenny Barron has an unmatched ability to mesmerize audiences with his elegant playing, sensitive melodies, and infectious rhythms.

Born in 1943 in Philadelphia, Barron started playing professionally as a teenager with Mel Melvin’s orchestra and, while still in high school, worked with drummer Philly Joe Jones.

At age 19, he moved to New York City and played with Roy Haynes, Lee Morgan, and James Moody. Upon Moody’s recommendation, Dizzy Gillespie hired Barron in 1962 without even hearing him play a note. After five years with Dizzy, Barron played with Freddie Hubbard, Stanley Turrentine, Milt Jackson, and Buddy Rich.

After working with Yusef Lateef and Ron Carter in the early ‘70s, Barron formed a trio with Buster Williams and Ben Riley, which also worked alongside of Eddie Lockjaw” Davis, Eddie Harris, Sonny Stitt, and Harry “Sweets” Edison.

Throughout the ‘80s, he collaborated with Stan Getz, touring with his quartet and recording several legendary albums including Anniversary, Serenity, and the Grammy-nominated People Time.

During that time he co-founded the quartet “Sphere,” along with Buster Williams, Ben Riley, and Charlie Rouse, which focused on the music of Thelonious Monk and original compositions inspired by him.

Sphere recorded several projects for the Polygram label, among them Four For All and Bird Songs. After the death of Charlie Rouse, the band took a 15-year hiatus and reunited, replacing Rouse with alto saxophonist Gary Bartz.

Barron has recorded over 40 albums as a leader since his first album Sunset To Dawn (1974). His own recordings for Verve have earned him nine Grammy nominations including People Time (1992), a duet with Stan Getz, Sambao (1993), and Freefall (2001). Spirit Song (1994), Wanton Spirit (1994), a trio recording with Roy Haynes and Haden, and Night and the City (1996), a duet recording with Charlie Haden, each received a double Grammy nomination for album and solo performance.

Whether he is playing solo, trio, or quintet, Barron is recognized the world over as a master of performance and composition. He consistently wins the jazz critics and readers polls, including those by Downbeat, Jazz Times, and Jazziz.

His awards include the Living Legacy Award from Mid-Atlantic Arts Foundation in 2019, a Lifetime Achievement Award from the Spanish ceramicist Lladró in 2012, and honorary doctorates from his alma mater SUNY Empire State in 2013 and from the Berklee College of Music in 2011.

In 2005, he was inducted into the American Jazz Hall of Fame and won a MAC Lifetime Achievement Award. He is a six-time recipient of the Best Pianist Award from the Jazz Journalists Association.

Barron earned his B.A. in music from SUNY Empire State College. From 1973-2000, he was a professor of music at Rutgers University where he mentored many young artists including David Sanchez, Terence Blanchard, and Regina Bell. Kenny Barron

Bassist and composer Kiyoshi Kitagawa is an integral part of today’s jazz scene. Born in Osaka, Japan in 1958, he began playing the guitar at the age of 14 and switched to the acoustic bass at the age of 19. Kitagawa began his career by playing at various clubs in the Kansai area, and quickly became the most sought-after bassist in Japan.

Soon after moving to New York City in 1988, he joined the Harper Brothers and later toured and recorded with Kenny Garrett. He has gone on to work with many of the leading names in jazz including Kenny Barron, Jimmy Heath, Andy Bey, Tommy Flanagan, Ben Riley, Victor Lewis, Terell Stafford, among others.

Kiyoshi can be heard on numerous recordings including Pete Minger’s Look To The Sky, Jimmy Heath’s You Or Me, Kenny Garrett’s Triology, and Kenny Barron’s Images and The Traveler.

One of the most accomplished drummers of his generation, Johnathan Blake has had years of live and studio experience across the aesthetic spectrum.

Born in Philadelphia in 1976, Blake is the son of renowned jazz violinist John Blake, Jr. After beginning on drums at age 10, Blake gained his first performing experience with the Lovett Hines Youth Ensemble. Later he worked with saxophonist Robert Landham in a youth jazz ensemble at the Settlement Music School.

He graduated from George Washington High School and went on to attend the highly respected jazz program at William Paterson University, where he studied with Rufus Reid, John Riley, Steve Wilson, and Horace Arnold, and began working professionally with the Oliver Lake Big Band, Roy Hargrove, and David Sanchez.

In 2006, Blake was recognized with an ASCAP Young Jazz Composers Award and in 2007 he earned his master’s from Rutgers University in composition.

Blake has contributed to multiple leader releases from Blue Note artists including Dr. Lonnie Smith’s Breathe (2021), All in My Mind (2018), and Evolution (2016) in addition to Kenny Barron’s Concentric Circles (2018).

All Miller Theatre events this season will be 75 minutes or less with no intermission to reduce congestion in lobby areas. We have added a mobile ticketing option to provide a seamless, contact-free entry.

In order to return to Miller Theatre, audiences must:

All ticket buyers must agree to adhere to these policies during the ticket-buying process.

Miller Theatre at Columbia University is the leading presenter of new music in New York City and a vital force for innovative programming. In partnership with Columbia University School of the Arts, Miller is dedicated to producing and presenting unique events, with a focus on contemporary and early music, jazz, opera, and multimedia performances.

Founded in 1988, Miller Theatre has helped launch the careers of myriad composers and ensembles over the years, serving as an incubator for emerging artists and a champion of those not yet well known in the United States.

A four-time recipient of the ASCAP/Chamber Music America Award for Adventurous Programming, Miller Theatre continues to meet the high expectations set forth by its founders—to present innovative programs, support the development of new work, and connect creative artists with adventurous audiences. millertheatre.com

Tickets start at $25; Students with valid ID start at $10