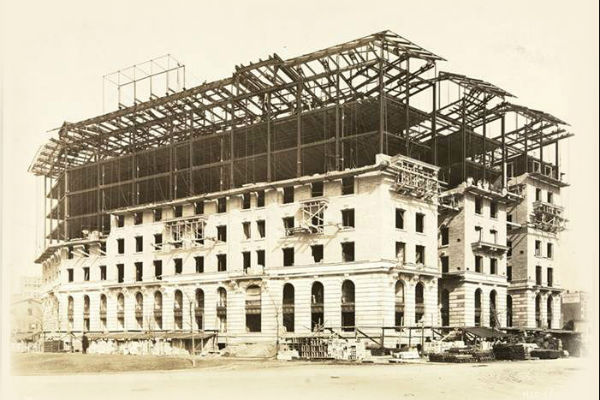 The first plans for a building named for Hendrik Hudson on Riverside Drive were announced in October 1897 by Eugene Kirby, a former manager of the Marie Antoinette Hotel.

This was to be an 18-story hotel. These plans were never completed, however, and by 1907, an apartment building bearing the name had been constructed instead.

The architectural firm of Rouse & Sloan was hired to design and construct the building.

The project was led by William L Rouse, and the result was an eight-story building modeled after a Tuscan Villa, containing 72 apartment units.

The building also featured two towers, on the north and south sides, connected by a promenade.

The apartments officially opened on October 1, 1907, and the units were quickly rented. Due to this success, a 12 story annex, also designed by William Rouse, was constructed.

The apartment building continued to enjoy success for several decades until the aftermath of the 1943 rent-control law caused it to rapidly deteriorate.

Related:  Conan Was No Barbarian In Harlem (Mashup)

This, along with the investigation of the accidental death of a small child in the building, prompted renovations to be carried out in 1959.

In 1971, the Hendrik Hudson became a co-op, and the north tower was removed.

In 1996, the decision was made to preserve the deteriorating south tower as a “stabilized ruin”, despite its preservation costing more than demolishing it.