The Legendary Harlem River Drive, The Speedway, The Hellfighters And The Song 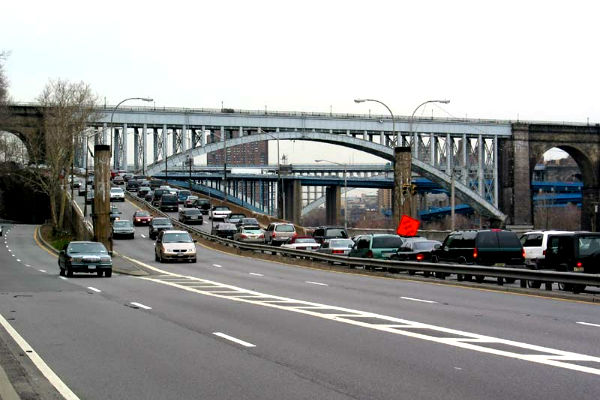 The Harlem River Drive is a 4.20-mile long north-south parkway in Harlem, New York in the borough of Manhattan.

It runs along the west bank of the Harlem River from the Triborough Bridge in East Harlem to 10th Avenue in Inwood, where the parkway ends and the road continues north as Dyckman Street.

The portion of the Harlem River Drive from the Triborough Bridge to the Alexander Hamilton Bridge is a limited-access highway.

South of the Triborough Bridge, the parkway continues toward lower Manhattan as FDR Drive. All of the Harlem River Drive is designated New York State Route 907P (NY 907P), an unsigned reference route.

The parkway north of 165th Street was originally part of the Harlem River Speedway, a horse carriage roadway that opened in 1898.

The rest of the parkway from 125th to 165th Streets opened to traffic in stages from 1951 to 1962. The parkway’s ceremonial designation, 369th Harlem Hellfighters Drive, is in honor of the 369th Infantry Regiment, also known as the Harlem Hellfighters.

The Harlem River Drive begins at exit 17 of the FDR Drive in East Harlem section of Manhattan. The parkway crosses under 125th Street alongside the Harlem River.

It then passes directly east of the Lenox Yard and the Harlem – 148th Street station. The Harlem River Drive crosses under the Macombs Dam Bridge, 155th Street, and Seventh Avenue before crossing northbound exit 23, a left exit to Frederick Douglass Boulevard.

Then, the parkway goes east of the Polo Grounds site and merges with the southbound exit 23, an exit to Frederick Douglass Boulevard and to a junction with the Harlem River Driveway, which goes south to 155th Street.

Shortly after, Harlem River Drive enters exit 24, a four-lane viaduct that rises from the parkway to connect to the George Washington Bridge via I-95 and US 1 along the Trans-Manhattan Expressway, as well to Amsterdam Avenue in Washington Heights.

The four-lane arterial continues north through Manhattan, entering a junction with Dyckman Street and Tenth Avenue, which is the northern end of the Harlem River Drive.

The Harlem River Speedway in 1903 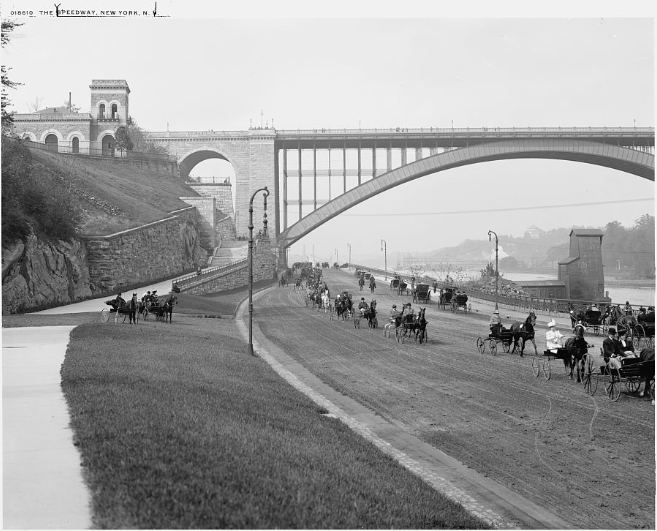 The Drive originated as the Harlem River Speedway, which started construction in 1894 and opened in July 1898.

Originally, the Speedway was exclusively for the use of horse-drawn carriages and those on horseback; bicyclists were specifically excluded, as were sulkies and drays.

The Speedway ran from West 155th Street to Dyckman Street, and soon became a tourist destination, where visitors watched carriage races and boat races on the river.

Rich New Yorkers used the Speedway to train their horses and size up those of their friends and competitors.

In 1919, motorists were allowed on the Speedway, but for normal driving purposes. The route was paved in 1922, and officially renamed the Harlem River Driveway.

The initial section of the drive would stretch from 125th to 165th Streets, near where it merged into the speedway. Traffic from the Triborough Bridge and the several Harlem River bridges joining the Major Deegan Expressway in the Bronx would feed into the drive.

Harlem River Drive would also contain playgrounds and parks along its route, similar to those on the East River Drive, There would be a service road abutting the drive’s west side.

Sections of the old speedway in the path of the highway would incorporated into the new highway. There would also be new ramps from the speedway section to the then-newly built George Washington Bridge.

The cost of the Harlem River Drive was originally estimated at over $18 million, of which $11 million was used to build the highway itself and nearly $7 million in acquired lands.

However, there were some disagreements during the planning of the new highway, and by 1946, the cost had increased to $26 million.

The modern Harlem River Drive was completed in segments during the 1950s and early 1960s. The segment connecting the Speedway to Eighth Avenue, which ended at 159th Street, was completed in 1951.

The highway from 125th Street and First Avenue to 132nd Street and Park Avenue opened in 1958, connecting three of the Harlem River bridges.

Another section between 142nd and 161st Streets opened in 1960, and an extension south to 132nd Street opened two years later, closing the gap between the two sections. In 1964, shortly after the drive’s completion, the entire drive was widened to six lanes. 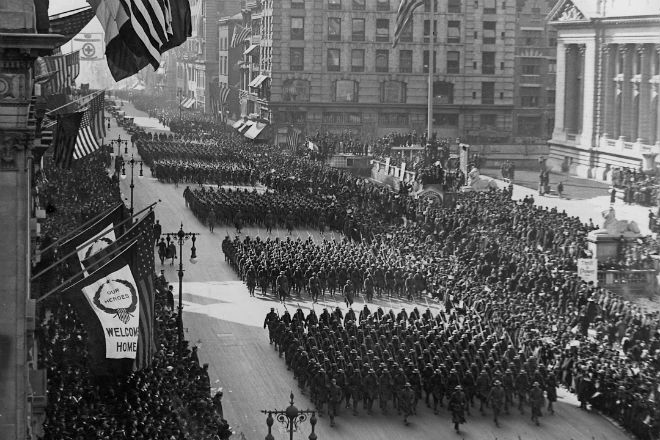 In 2003, the New York State Department of Transportation ceremonially designated the parkway as the “369th Harlem Hellfighters Drive” in honor of the all-black regiment that fought to defend France during World War

Founded in 2010, the Manhattan Waterfront Greenway runs between the river and the drive, from 155th to Dyckman Streets, in a portion of Highbridge Park which had been abandoned and fenced off approximately half a century.

Harlem River Drive appeared in the title and lyrics of a song of the same title by music great Minnie Ripperton.

It was one of the best songs from her Blacks and Blues 1973 album. Via source.