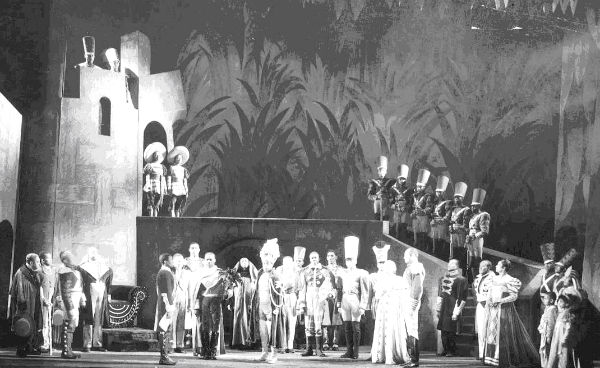 . The group was founded by the influence of the purposes of the Negro Unit of the Federal Theatre Project in Harlem. It produced 19 plays before closing in 1949. Designed as a community theater group, performances were held in Harlem’s Schomburg Center for Research in Black Culture

Hill and O’Neal started the ANT by assembling several of their own theatre friends: Howard Augusta, James Jackson, Virgil Richardson, Claire Leyba, Jefferson D. Davis, Vivian Hall, Austin Briggs-Hall, Stanley Green, Fanny McConnell, and Kenneth Manigault. Collectively, they started the group with just 11 cents. In the beginning, Hill spent his time mailing out postcards to invite as many people as he could to meetings and within just a few weeks, the group grew to thirty people.

Hill approached librarians at the public library on 135th Street in Harlem, the Harlem Branch of the New York Public Library

, to start producing his plays. The librarians granted Hill and the ANT permission to use their basement stage. The basement theatre held 150 seats and Hill charged 49 cents a seat. The first show they produced, “Hits, Bits, and Skits,” opened on July 17, 1940. The first major play that the ANT put into rehearsal was “On Strivers’ Row” which Hill put into rehearsal after it had done so well with the Rose McClendon Players who also held performances in Harlem. “On Strivers’ Row” ran for five months and in March 1941, Hill moved it to the Apollo Theatre as a musical with the lyrics of Don Burley, the music of J.P. Johnson, and the choreography of Leonard Harper. It ran at the Apollo Theatre for one week.

In 1944, the ANT applied to the General Education Board of the Rockefeller Foundation for a financial grant. The proposal they submitted asked for salaries to be paid to the company’s officers.

It also informed the Board on the following objectives of the ANT:

The proposal resulted in a $22,000 grant-in-aid for the ANT. These objectives were also printed on programs for ANT productions.

Its most successful production, Anna Lucasta, fundamentally transformed the ANT. A white author, Phillip Yordan, wrote the play about a Polish family in Pennsylvania whose daughter is a waterfront prostitute, but could not find a company to perform it. So he rewrote it to feature a black family. It was performed by the ANT in 1944. According to a notice in The Brooklyn Eagle

on March 30, 1944, the sets for that initial production were designed by the American realist painter Michael Lenson, but that has not been verified. Five weeks later the play opened on Broadway. Nine New York newspaper dailies reviewed the show. They all raved and producers instantly starting fighting over who would get the rights to the play. Yordan agreed to sign a Dramatists Guild

contract that would make Hill the coauthor of Anna Lucasta. This gave Hill a five percent author’s royalty.

The ANT itself received few royalties for Anna Lucasta and the next three ANT plays to appear on Broadway were not successful. Despite this, following the success of Anna Lucasta the ANT became less community-centered. From then on, the ANT only featured plays from established white playwrights, and young actors viewed the ANT as a means to break into Broadway productions.

The ANT had four goals that they were governed by:

When the ANT was first founded in 1940, the group created a 30-page constitution for themselves that reflected the ideals of the Federal Theater Project

The following is an excerpt from the constitution:

“A People’s theatre is a very valuable institution. it provides the finest outlet for class emotions that can be organized. It serves as a spur to citizen ambition provides a partly self-supporting source of work and income and a healthy kind of occupational therapy on a national scale for thousands.

Unhappily, we have been trained to think of the theatre mostly in terms of commercial enterprise that is too expensive when it is worthy, and too cheap and boring when it is not. We know it too frequently as an investment for gambling showmen, or as a playground for dilettantes and escapists who are unable to withstand the hard realities of life. We need a people’s theatre which shall in effect be a national theatre. The people who want a theatre will have to organize it and pay a part of the expense for both its creation and support. Realizing the reluctance of the people to assume this responsibility, the essential burden of stimulating the development of such a project rests upon the shoulders of those individuals who are willing to assume this obligation, those who feel sincerely the call in a genuine quest for the content of theatre art, and by their talent, industry, and profound respect for a theatre they shall create.”

The acronym ANT was popular as it was viewed as a metaphor for how hardworking and community-driven the group was.

In a 1996 interview with Cornel West

, Harry Belafonte described how the American Negro Theater really opened his eyes to how “magical” theatre was. Belafonte said that he saw his first show in the ANT when he was given two tickets as a gratuity when he was working as a janitor’s assistant for Clarice Taylor

, who was in the play that night.