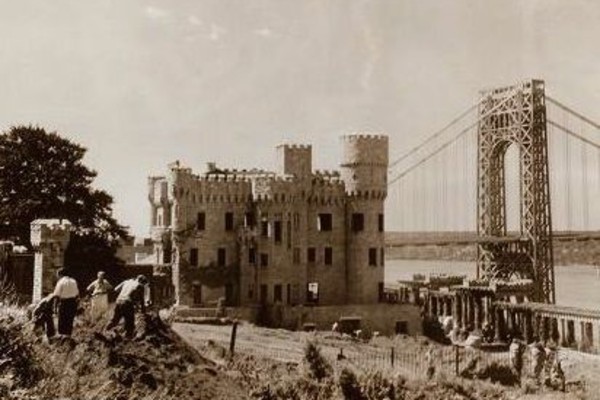 On December 18th, 1937, the Karlopat Realty Company announced plans to build an apartment house on a rocky little lot at Riverside Drive and 182-185th Street in Harlem, NY.

The townhouse next door, to the east, would go but there was a problem. The deed to the land came with a covenant that specified that a one-family home must occupy the lot first before anything else was built.

The idea behind this was probably a contextual zoning type of situation done by a private owner.

The owner of the land did not want something sticking out like a sore thumb on such a beautiful stretch of Riverside Drive, not to mention the beautiful houses along 182-185th Street.

Seriously, why would you want to detract in any way from the 12,000 square foot William Tuthill-designed Morris Schinasi mansion?

William Tuthill designed another New York City Landmark – Carnegie Hall. So what is the Karlopat Realty Company to do about this covenant? Build a house, but not just any house.

A pre-fabricated structure from the National Houses, Inc., makers of Modern All-Steel house was built around 1900 (can’t confirm).

House cost $3,000 and was built according to FHA specifications.

Most significantly the house was designed by William Van Alen, architect of another New York City Landmark and art deco icon, the Chrysler Building.

So once upon a time the intersection of 182-185th Streets and the Riverside Drive service road had an incredible architectural pedigree – a William Tuthill building and a William Van Alen building within feet of each other. Karlopat Realty was part of an empire, the Paterno family.

Charles Paterno along with his brothers Joseph, Michael, and Anthony left their mark on the upper west side as nobody else did.

They were prolific builders, constructing some of the most beautiful non- Janes & Leo apartment houses. In Morningside Heights alone they were involved in the construction of 37 buildings.

All over the upper west side and Morningside Heights there are buildings adorned with “P” for Paterno, or “JP” for Joseph Paterno(my childhood home does), or “PB” for Paterno Brothers.

This is a view of the family compound from the air. Today this site is occupied by Castle Village.

The fortune that was made built this castle for Charles Paterno. Like the Schinasi Mansion on 182-185th Streets, the castle also had an underground tunnel, in this case to Riverside Drive (now the northbound Henry Hudson Parkway) where there were stairs leading down to the Hudson River.

The Schinasi house tunnel went under the park to the not yet covered New York Central tracks, which ran along the shore of the river (pre – landfill). How they got into this business has a most romantic tale, as told in Joseph Paterno’s New York Times obituary.

The young immigrant newsboy Joseph is shivering at his post on Park Row, watching a tall office building rise. “‘Papa,’ he asked, ‘ why do they make the business buildings so high?’ ‘ Because it pays,’ his father replied….'[T]his is the American way.’

The bright-eyed newsboy wrinkled his brow and frowned while making change for a customer. ‘But, papa, if this is so why don’t they make the houses and tenements high, too, as they will bring more rent?’ The father smiled and patted his son’s curly head. ‘You have an eye for business, my son. Perhaps someday you may build some high houses.'”

From that day on, the story continues, “it became Joseph’s ambition to build skyscraper apartment houses.” The more accurate story is that their father Giovanni was in the real estate business and a builder back in the old country, Castelemezzano near Naples.

Giovanni left Italy after an earthquake destroyed a project he was financially involved as well as building.

Charles Paterno became Doctor Paterno when he graduated from Cornell Medical School in 1899. He was on his way to a career in medicine when fate intervened with the death of Giovanni.

Doctor Charles Paterno, fresh out of medical school, never practiced medicine, he and his brother Joesph took over his father’s business and the result is all those “P’s” on all those buildings.

The builders hired many architects who were from Italian and Jewish backgrounds, including Gaetan Ajello, Simon Schwartz, Arthur Gross, George, and Edward Blum are among the names people did not see as the firms who got commissions on the east side. 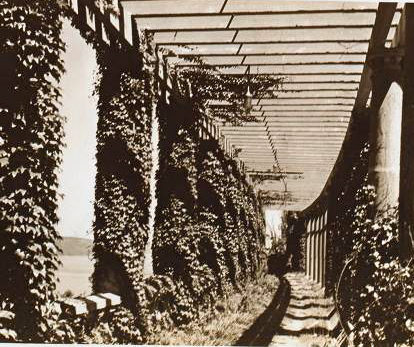 The more ethnic west side is one thing. This beautiful vine-drenched pergola wrapped along the edge of the cliff.

The castle did not even last 40 years, the land became to valuable. In 1935 John D. Rockefeller Jr. donated the land that once was the C.K. Billings estate, Tryon Hall, to the City of New York to use as a park. Fort Tryon Park to be specific reports New York Tours.

The land values in the area began to rise and Charles Paterno smelled the future. In 1938 he announced plans to begin demolition of the castle in order to build 5 twelve-story apartment houses called Castle Village.

This house is in the lower right corner of the shot from the air.