“The House Beautiful,” The Lafayette Theatre, In Harlem, New York, 1912 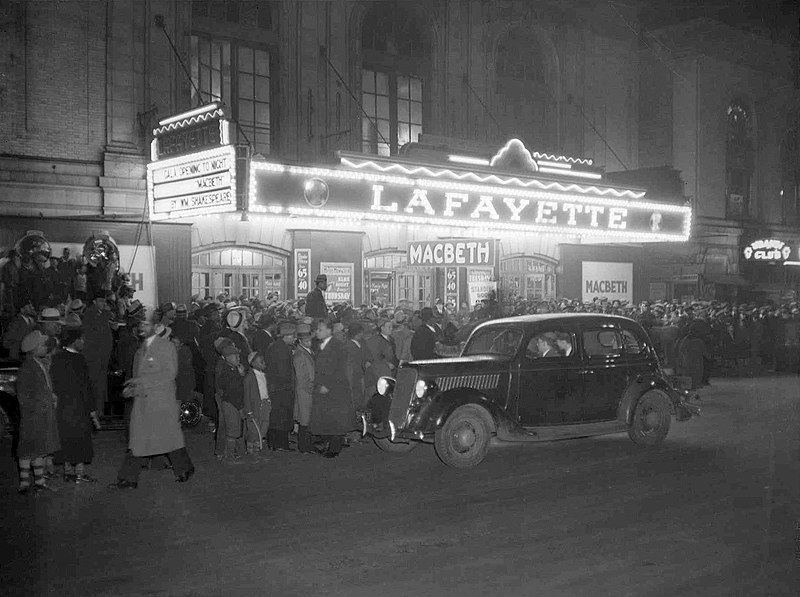 The Lafayette Theatre was an entertainment venue located at 132nd Street and 7th Avenue in Harlem, New York that operated from 1912 to 1951.

The Lafayette Theatre, also known as “the House Beautiful,” was an entertainment venue.

The 1,500-seat two-story theater was built by banker Meyer Jarmulowsky.

It was designed in the Renaissance style by architect Victor Hugo Koehler, who also designed the two three-story buildings flanking the theater on the corners of 131st and 132nd Streets.

The Lafayette Theatre opened in November 1912.

In 1913 the Lafayette became the first major theater to desegregate.

African-American theatergoers were allowed to sit in orchestra seats instead of the balcony, to which they were relegated in other New York theaters.

The Lafayette Players, the resident stock company, played before almost exclusively African-American audiences both in plays from white theater repertory and in the classics.

The theater and presented such Broadway hits as Madame X and Dr. Jekyll and Mr. Hyde.

From 1916–1919, the theatre was managed by Quality Amusement. Robert Levy, the owner of this entertainment company, drew large audiences of both blacks and whites with his sophisticated productions and groundbreaking work with black actors.

In 1923, Duke Ellington made his New York debut while performing in Wilbur Sweatman’s band at the Lafayette, and later performed with his own group at the venue.

Other jazz musicians who performed at the Lafayette include Fletcher Henderson, Bennie Moten, Chick Webb, and Zutty Singleton.

The Lafayette Theatre reached the height of its fame with the Voodoo Macbeth, a production of Shakespeare’s Macbeth, adapted and staged by Orson Welles that ran April 14–June 20, 1936.

This show had an all African-American cast. It was a production of the Federal Theatre Project which was part of the Works Project Administration.

The overture was by James P. Johnson and such notable actors as Canada Lee and Rose McClendon were part of the program.

The production was universally known in advance as the “Voodoo Macbeth” because the setting was changed from Scotland to a fictional Caribbean island based on Haiti, and acquired its nickname due to its use of voodoo imagery in place of the witchcraft in the original play.

In 1951 the building was acquired by Williams Institutional Christian Methodist Episcopal Church.

The original facade was replaced in 1990, to the distress of advocates of historic preservation.

The building was demolished in 2013.