The Ladera Getting Ready For Private Terraces, A Plant Lined Edifice And More In Harlem 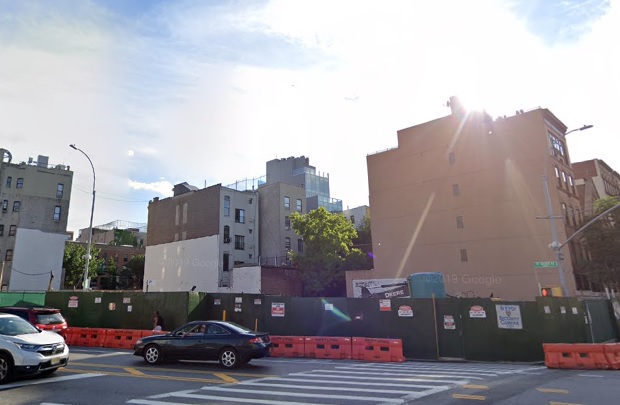 Construction has topped out on The Ladera, a residential building at 300 West 122nd Street in Harlem.

Developed by Happy Living Development and designed by Isaac & Stern Architects with interiors by Paris Forino, the 13-story structure is located between West 121st Street and West 122nd Street at the crossroads of Frederick Douglass Boulevard and Saint Nicholas Avenue. Douglas Elliman Development Marketing is handling sales of the 155 units.

Recent photos from Google maps show the lot cleared for construction with a green fence surrounding the property.

On New York Yimby the site is shown the wide eastern elevation wrapped in scaffolding and black netting. A large number of windows have been installed, though the final red brick masonry exterior, which in the main rendering appears to cover the first nine stories, has yet to be laid.

Above the setback on the tenth floor, the envelope design changes to a much darker set of curtain wall panels.

The residential arrangement will consist of 16 studios, 54 one-bedrooms, 68 two-bedrooms, and 17 three-bedroom layouts, each providing 10-foot-high ceilings and a select few coming with private landscaped terraces. The latter will be located on the upper floors and make up the stepped design seen on the main profile.

A flat rooftop deck with a large amount of shrubbery and plants will cap the edifice. Amenities include a swimming pool, a fitness center, a reading room, a party room, and a parking garage capable of holding 17 vehicles.

The closest transit hub is the 125th Street station with access to the A, B, C, and D trains at the intersection of Dr. Martin Luther King Jr. Boulevard and Manhattan Avenue. The northern tip of Morningside Park is two streets to the west, and the wide thoroughfare of Adam Clayton Powell Jr. Boulevard is one street away to the east.

Construction on 300 West 122nd Street is likely to be completed sometime next year.