The Historic The Schinasi House In Harlem, New York, 1907 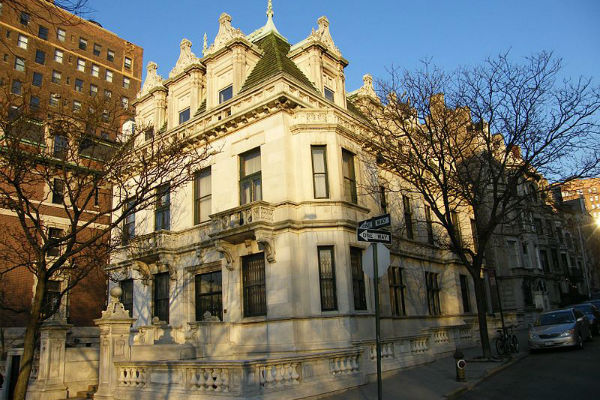 The Schinasi House is a 12,000-square-foot, 35-room marble mansion on Riverside Drive in the Upper West Side in Harlem, New York City. It was built in 1907 for Sephardic Jewish tobacco baron Morris Schinasi. The mansion was designed by Carnegie Hall architect William Tuthill and reportedly retains almost all of its historic detail, including a Prohibition-era trap door that once extended all the way to the river.

The structure was designated a New York City Landmark on March 19, 1974, and added to the National Register of Historic Places on April 23, 1980.

It has been cited as being the last remaining detached single-family house in Manhattan.

Since 2013, it is owned by Mark Schwartz, a Goldman Sachs executive, who purchased it for $14 million

Completed in 1909 at the northeast corner of West 107th Street and Riverside Drive, the three-story, 12,000 square foot mansion was designed in neo-French-Renaissance style by William Tuthill., the same architect who designed Carnegie Hall.

Morris Schinasi, an Ottoman-Jewish immigrant who made his millions on cigarettes, commissioned the design and owned the thirty-five-room mansion until his death in 1928.

After that the mansion changed hands several times until 1979 when Hans Smit, a Columbia University Law Professor, bought it and commissioned an extensive interior restoration. It was designated a New York City landmark on March 19, 1974.

The mansion is one of a kind, with rich details in every niche of the building. Pineapple motifs, seen as a symbol of hospitality, are repeated throughout the ornamentation and there was originally a tunnel, now closed up, that led under ground to the Hudson River.

Until 2013 it was inhabited by Hans Smit’s son, Robert Smit, his two daughters, Jessie and Marley, and his son, Lennon.

On March 19, 1974 the Schinasi mansion was designated a New York City landmark.

The Landmarks Preservation Commission found that this residence had “special character, special historical and aesthetic interest, and value as part of the development, heritage, and cultural characteristics of New York City.”[6]

Morris Schinasi who commissioned this mansion in 1909 was an Ottoman Jewish immigrant who came to the United States in 1890.

He came from a family with little money and borrowed $25,000 (in US) from a friend to get to the United States.

With him he brought a machine that would change his fortune – a cigarette-rolling machine he designed and presented at the Columbian Exposition held in Chicago in 1893.

Until this point, every single cigarette had been hand rolled and therefore this novel device created a lot of interest.

Soon after, his brother joined him in New York City and they established the Schinasi Brothers Company, which featured their brand “Egyptian Prettiest” cigarettes rolled with Turkish tobacco.

The product became very popular and the brothers built their commercial empire from the ground up.

After Schinasi had made his fortune, and met his wife in 1903, he decided to build the mansion on Riverside Drive.

At the time most mansions were being built along Park Avenue and Fifth Avenue, but it was predicted that patrons commissioning mansions would get tired of the hustle and bustle of the busy East Side and retreat to building their extravagant homes along the quieter Riverside Drive.

As this prediction never came to fruition, the Schinasi mansion remains the largest single-family residence along Riverside Drive.

Schinasi selected William Tuthill as the architect for the mansion, but the relationship was not a pleasant one. Tuthill later sued Schinasi for a sum of $5655.65.

Schinasi lived at the mansion with his wife, Laurette, and three daughters, Victoria, Juliette, and Altina for almost twenty years.

In 1928 Schinasi died at the age of seventy-one, and two years later his heirs sold the house to Semple Realty Corporation for $200,000.

Since 1930, the mansion has seen many different visitors and uses, beginning as a Semple School for Girls that served as a finishing school for well-to-do young ladies.

It is said that in 1956 Mrs. Semple herself actually died in one of the mansion’s thirty-five rooms.

Columbia University was the next to purchase the building in 1960 and turned it into a daycare center known as “The Children’s Mansion”.

Photographer Timothy Greenfield-Sanders was one of 45 residents. Columbia sold the mansion in 1979 to Columbia law professor Hans Smit and his wife for $325,000. At this time he initiated an interior restoration that took twenty years to complete.

During Smit’s ownership, he never actually lived in the building, yet his brother’s family did for several years during this time period. Smit also used the mansion for Columbia Law School gatherings and small parties.

After Smit completed the restoration in 2006 he attempted to sell with an initial asking price of $31 million. Since then the mansion has made a handful of appearances on the real estate market.

It was listed at $15 million in the fall of 2011. It is unconfirmed whether the mansion was sold at that time.

Mark Schwartz, a vice chairman at the investment bank Goldman Sachs, bought the Schinasi House at 351 Riverside Drive in 2013.

The Schinasi mansion sits on the west side of Manhattan in the Upper West Side neighborhood at Riverside Drive and West 107th Street, directly across from Riverside Park.

When the mansion was built in the early 1900s there was limited development along Riverside Drive and Park, but the thought was that more mansions would be erected within the near future.

Although there are a handful of single-family mansions along Riverside Drive, the prediction for this kind of development never reached its full potential.

The surrounding neighborhood is full of residential townhouses and apartment buildings and a few blocks northeast sits Columbia University with its main campus at West 116th Street between Broadway and Amsterdam Avenues.

The small historic district, Riverside Drive – West 105th Street, sits just a block south and is made up of rowhouses and townhouses built between 1889 and 1902.

There are also the Baumgarten House (1901) and the Master Apartments (1929) in the neighborhood both receiving landmark status, such as the mansion.

A unique characteristic of the mansion is that it is completely offset from all four sides, making it detached from all neighboring buildings.

Being completely detached allows the mansion to take advantage of treating all four sides of the building and also to create spaces such as a typical English basement. All four facades of the building were treated slightly differently.

The front façade faces West, towards Riverside Park, containing the main door that is flush with the exterior. The longer façade is along West 107th street containing end sections and a recessed center.

The North section, which faces the neighboring building on Riverside Drive, curiously contains the most elaborate treatment. Finally the back façade, or East side, contains a three-sided copper oriel at the second level.

The form of the Schinasi mansion makes it unique in Manhattan. Since it is detached from any neighboring building, it is completely freestanding and thus, currently, the only such privately owned single-family residence in Manhattan.

This huge building, a total of 12,000 square feet, contains entertainment and service rooms in the basement and first floor including a gym, servants quarters, dining room, gallery, waiting area, and two parlor rooms.

The second and third levels contain many bedrooms and bathrooms, along with sitting areas and kitchens as well. Finally on the top floor there is a studio apartment.

In total there are twelve bedrooms, eight bathrooms, and five kitchens. When built there was a tunnel connecting the English basement of the mansion underground Riverside Drive to the banks of the Hudson River. However this route has since been since sealed off.

The Schinasi mansion was used originally as a single family home. That was the case during the twenty or so years that Schinasi and his immediate family lived there.

However, after his death Schinasi’s heirs sold the mansion and from then on it never saw the same use. Its use has ranged from a private girls finishing school to a daycare center to a location for law students gatherings.

It has also been used as the home to June, the wife of a late conman, who rents the studio apartment to the fictional character Neal Caffrey in the popular USA Network show White Collar.

The house is also used as a setting on the popular Hulu show The Mindy Project as ‘The Bleecker Friends Quaker School for Toddlers’ for Mindy’s son, first seen in S4.

Materials and methods of construction

The Schinasi mansion is made of various carved materials, on the interior there is a mix of Egyptian carved marble, hand carved wood, and hand painted frescos.

Within the wood are intricately carved symbols and décor, and the pineapple, a symbol of hospitality, is repeated throughout all carvings.

The exterior is built completely of white Vermont marble, structurally and aesthetically. The roof is a mansard terra cotta and green tile with steel girders and copper cornices.

The construction manager of the mansion, Charles T. Willis, predicted the house would cost $180,000 to build, and he was right. The mansion completed construction one year after it began in 1909.