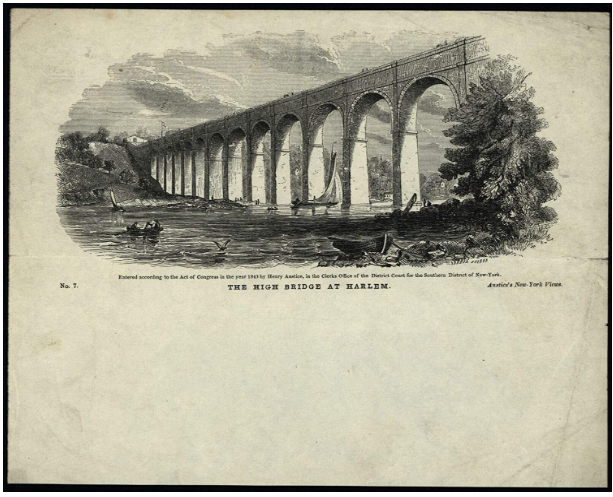 A wonderful vintage “The High Bridge At Harlem,” print from Amazon, the high Bridge was (originally the Aqueduct Bridge) is the oldest bridge in New York City.

It opened originally opened as part of the Croton Aqueduct in 1848 and reopened as a pedestrian walkway in 2015 after being closed for over 45 years.

A steel arch bridge with a height of 140 ft (43 m) over the Harlem River, it connects the New York City boroughs of the Bronx and Manhattan.

High Bridge was originally completed in 1848 with 16 individual stone arches. In 1928, the five that spanned the Harlem River were replaced by a single 450-foot (140 m) steel arch.

The bridge was closed to all traffic from the 1970s until its restoration, which began in 2009. The bridge was reopened to pedestrians and bicycles on June 9, 2015.

The bridge is operated and maintained by the New York City Department of Parks and Recreation.

Originally designed as a stone arch bridge, the High Bridge had the appearance of a Roman aqueduct. Construction on the bridge was started in 1837, and was completed in 1848 as part of the Croton Aqueduct, which carried water from the Croton River to supply the then-burgeoning city of New York some 10 miles (16 km) to the south.

The design then fell to the aqueduct’s engineering team, led by John B. Jervis. James Renwick, Jr., who later went on to design the landmark Saint Patrick’s Cathedral on Fifth Avenue in Midtown Manhattan, participated in the design.

The Croton Aqueduct had to cross the Harlem River at some point, and the method was a major design decision. A tunnel under the river was considered, but tunneling technology was in its infancy at the time, and the uncertainty of pursuing this option led to its rejection.

This left a bridge, with the Water Commission, engineers and the public split between a low bridge and a high bridge. A low bridge would have been simpler, faster, and cheaper to construct.

When concerns were raised to the New York Legislature that a low bridge would obstruct passage along the Harlem River to the Hudson River, a high bridge was ultimately chosen.

The contractors for the project were George Law, Samuel Roberts and Arnold Mason. Mason had prior engineering experience working on the Erie Canal and the Morris Canal.

In 1864, a walkway was built across the High Bridge. The New York City Department of Parks and Recreation (NYC Parks), the bridge’s current maintainer, described the walkway as the bridge’s contemporary High Line. However, the bridge was not used for vehicles.

In 1928, to improve navigation in the Harlem River, the five masonry arches that spanned the river were demolished and replaced with a single steel arch of about 450 feet (140 m). Of the masonry arches of the original 1848 bridge, only one survives on the Manhattan side, while some ten survive on the Bronx side.

Use of the structure to deliver water to the island ceased on December 15, 1949.

By 1954, The New York Times reported that the commissioner of the Department of Water Supply, Gas and Electricity said that “the bridge entailed serious problems of maintenance and vandalism.” Robert Moses agreed to take responsibility for the bridge, which was transferred to the Parks Department in 1955.

There were incidents, in 1957 and 1958, of pedestrians throwing sticks, stones, and bricks from the bridge, seriously injuring passengers on Circle Line tour boats which passed under the bridge.

Concerns due to these incidents supposedly contributed to the bridge being closed as early as 1960, although NYC Parks said that it was not closed until 1970, when high crime and fiscal crisis led to the contraction of many city services and public spaces.

However, a reporter for the New York Times wrote that when he had tried to walk across the bridge in 1968, it was closed. 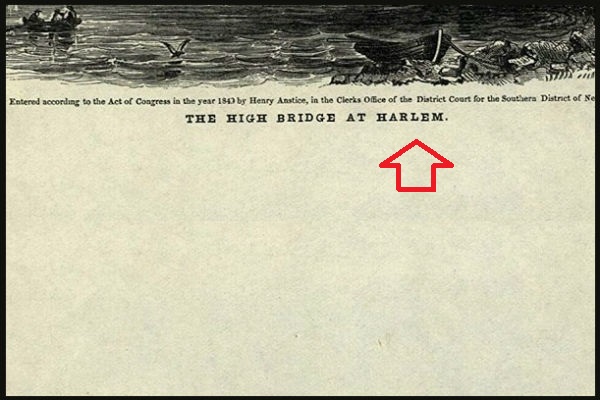 (The close up of “The High Bridge At Harlem”)

The High Bridge was part of the first reliable and plentiful water supply system in New York City. As the City was devastated by cholera in 1832 and the Great Fire in 1835, the inadequacy of the water system of wells-and-cisterns became apparent.

Numerous corrective measures were examined. In the final analysis, only the Croton River in northern Westchester County was found to carry water sufficient in quantity and quality to serve the City. The delivery system was begun in 1837, and was completed in 1848.

The Old Croton Aqueduct was the first of its kind ever constructed in the United States. The innovative system used a classic gravity feed, dropping 13 inches (330 mm) per mile, or about 1/4″ per 100′ (~0.02%) and running 41 miles (66 km) into New York City through an enclosed masonry structure crossing ridges, valleys, and rivers. University Avenue was later built over the southernmost mainland portion of the aqueduct, leading to the bridge.

Though the carrying capacity was enlarged in 1861–1862 with a larger tube, the bridge (obsolete due to opening of the New Croton Aqueduct) ceased to carry water in 1917. In the 1920s, the bridge’s masonry arches have declared a hazard to ship navigation by the United States Army Corps of Engineers, and the City considered demolishing the entire structure.

Local organizations called to preserve the historic bridge, and, in 1927, five of the original arches across the river were replaced by a single steel span, while the remaining arches were retained.

In November 2006, the Department of Parks and Recreation announced that the bridge would reopen to pedestrians in 2009.

This date was repeatedly put off. A $20 million renovation project would include strengthening the arch, improving staircases, cameras on both ends of the bridge, and boat beacon lights among other features.

In 2009, preliminary planning, funded by PlaNYC, began for restoring the High Bridge. The High Bridge Coalition raised funds and public awareness to restore High Bridge to pedestrian and bicycle traffic, joining the Highbridge Parks in both Manhattan and the Bronx that together cover more than 120 acres (0.49 km2) of parkland, and providing a link in New York’s greenway system.

On January 11, 2013, the mayor’s office announced the bridge would reopen for pedestrian traffic by 2014, but in August 2014, the open was postponed to spring of 2015. In May 2015, the Parks Department announced a July opening and a July 25 festival.

The High Bridge Water Tower, in Highbridge Park between West 173rd and 174th Streets, on top of the ridge on the Manhattan side of High Bridge, was built in 1866–1872 to help meet the ever-increasing demands on the city’s water system.

The 200-foot (61 m) octagonal tower, which was authorized by the State Legislature in 1863, was designed by John B. Jervis, the engineer who supervised the building of the High Bridge Aqueduct.

This “high service” improved the water system’s gravity pressure, necessary because of the increased use of flush toilets.

The High Bridge system reached its full capacity by 1875. With the opening of the Croton Aqueduct, the High Bridge system became less relied upon; during World War I, it was completely shut down when sabotage was feared. In 1949, the tower was removed from service, and a carillon, donated by the Altman Foundation, was installed in 1958.

The tower’s cupola was damaged by an arson fire in 1984. It was reconstructed, and the tower’s load-bearing exterior stonework – which Jervis designed in a mixture of Romanesque Revival and neo-Grec styles – was cleaned and restored in 1989–1990 by William A. Hall Partnership.

Christopher Gray has said of the tower’s design that “Its rock-faced granite gives the tower a chunky, fortified appearance as if it were a lookout for a much larger castle complex that was never built…. The granite is competently handled, but the details are not very inspired or elegant. The tower is more picturesque than beautiful.”

The interior of the tower, which was never open to the public, features a wide well-detailed iron spiral staircase with six large landings and paired windows.

The High Bridge Water Tower was designated a New York City landmark by the Landmarks Preservation Commission in 1967 an overview reports Wikipedia.