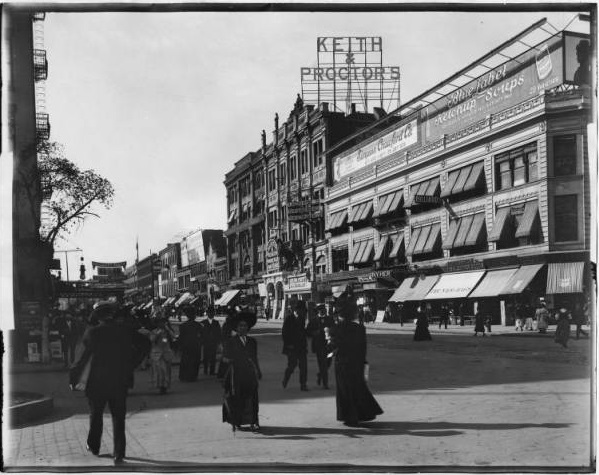 The Harlem Opera House (a Loew’s house) was a US opera house located at 211 West 125th Street in Harlem, New York.

Designed by architect John B. McElfatrick, it was built in 1889 by Oscar Hammerstein I; it was his first theater in the city admission prices ranged from 25 cents to $1.50.

The pavement on 125th Street between 7th and 8th Avenues The street was still cobblestone at the time and notice the small country house to the right of the majestic structure. Next to the Opera House was the Victoria Theatre and the Hurtig & Seamon’s Music Hall (after 1934 renamed the Apollo Theatre). By the turn of the last century, a low corner building would replace the estate and that said construction would survive the Opera House itself.

An early work at the house was The Charlatan, an operetta with music and lyrics by John Philip Sousa and a book by Charles Klein, which transferred from the Knickerbocker Theatre. From 1900 to 1911, the theater was known as Keith & Proctor’s Harlem Opera House. 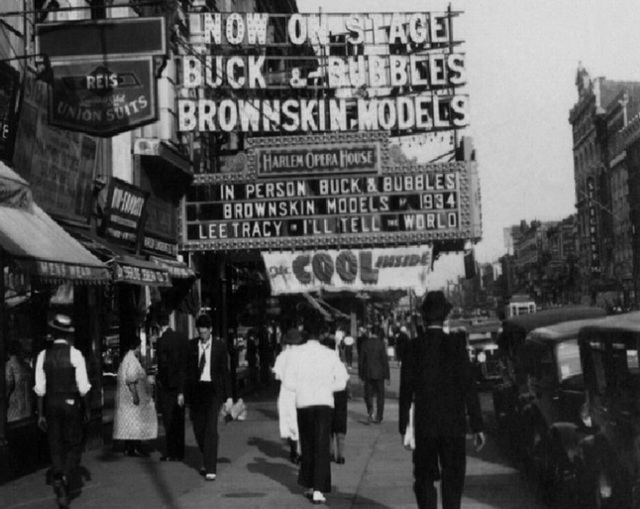 Through the early 1920s, the venue was included in the Keith-Albee vaudeville circuit. By 1922, it was purchased by Frank Schiffman and subsequently closed. The Harlem Opera House showed films starting in the mid-1930s.

The venue featured a wide and grand staircase and balcony that seated 402 with polished Italian marble, that echoed an orchestra that had 10 members and seated 553, and a gallery that seated 600. The auditorium offered blue seats, and the boxes were arranged in three tiers on either side of the stage. They occupied the most conspicuous part of the theatre, were set forward, and were entirely open. The curtain was made by E. T. Harvey and was decorated with an image of Shakespeare reading one of his plays to Queen Elizabeth and some members of her court; it was painted in bright colors.

The theatre was on the ground floor, had both electric and gas illumination,

By the turn of the last century, a low corner building would replace the estate and that said construction would survive the Opera House itself.

It was demolished in December 1959.

Photo credit: 1) Shows the building around 1900 when it was just finished. Hammerstein’s Harlem Opera House at 8th Avenue and 125th Street, John C. Rice and May Irwin in “The Widow Jones” on billboards from the Joseph Byron Company collection at the Museum of the City of New York via Source. 2) Street view on 125th Street.