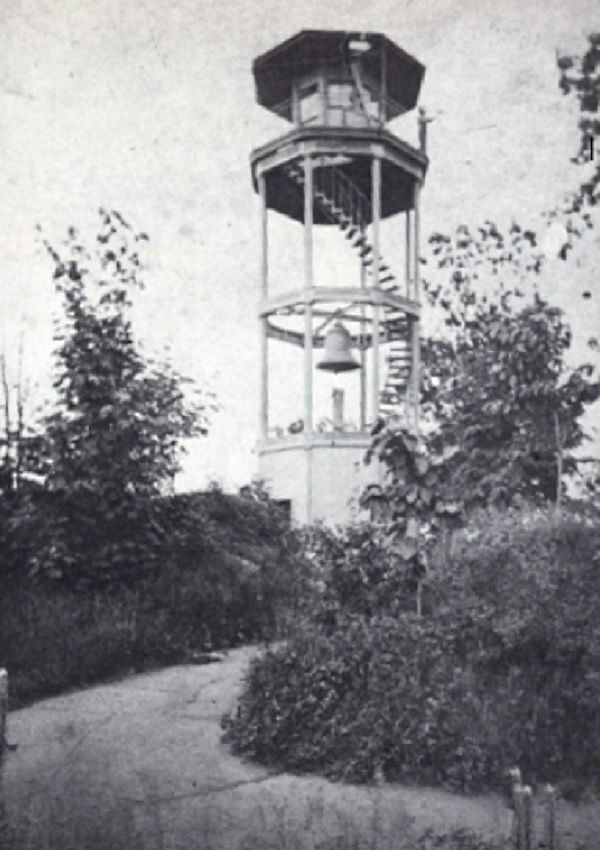 A prominent feature of Marcus Garvey Park and its neighborhood, the Mount Morris Fire Watch Tower, also known as the Mount Morris Fire Watchtower, serves as an important community landmark. In the 19th century efforts to contain fire in NYC included the construction of an extensive reservoir system and the Croton Aqueduct as well as the placement of round-the-clock watchmen at strategic vantage points. These men directed fire companies through an alarm code corresponding to the severity of the fire and to numbered districts, transmitted by bells, flags and lanterns. City Hall, constructed in 1812 with a bell in its cupola, became the city’s first and main alarm. After a devasting fire in 1835, the Fire Department built dedicated towers across the city.

Ironically, these early structures were made of wood and fire consumed several of them. Fortunately, fireproof construction became possible in the late 1840s when inventor James Bogardus perfected the use of cast iron as a structural material. The Board of Aldermen commissioned Bogardus to erect the World’s first cast iron watchtower in 1851 on 9th Avenue at West 33rd Street and second in 1853 on Spring Street. Two years later, after petitioning by Harlem residents, the city announced a third tower atop Mount Morris. Julius B. Kroehl won the contract with a $2,300 bid (Bogardus wanted $5700) but he followed the pioneer’s theory and design; he completed the structure in 1857. Employing this revolutionary building technology these early examples of post-and-link cast-iron architecture inspired the steel cages developed in the 1800s to support skyscrapers. The Mount Morris Watch Tower is the only surviving example of this kind of structure.

The 10,000-pound bell in the Tower is not the original one. Cast by founders E.A. and G.R. Meneeley of West Troy, N.Y. In 1865, it replaced an earlier bell furnished by Jones & Hitchcock of Troy, NY. Manufacturing flaws may have destroyed the first bell; more likely, improper striking caused the damage. Originally, watchman struck the bell manually by pulling a lever on the observation deck, one tier above the bell. The four-legged iron frame standing beneath the tower today is the remains of an electromechanical striker that permitted remote operation; it was first installed in the 1810s and replaced after 1905.

The fire tower network which at its peak included eleven towers, fell into disuse in the 1870s as the Fire Department began to install telegraphic alarms on street corners and taller buildings rendered these early obsolete. At the request of neighbors; however, the Mount Morris tower continued to sound at noon and at 9:00 pm weekdays and 9:00 am and 9:00 pm on Sundays for timekeeping and church purposes until about 1909. The Fire Department retained ownership of the tower until 1913.

Mount Morris Fire Watch Tower still stands due to its protected location on Park land. The tower was designated a New York City landmark in 1967 and was listed on the National Register of Historic Places in 1976. Through the support of the Marcus Garvey Park Conservancy and the Manhattan Borough president, Parks undertook a major stabilization of its structure in 1994.