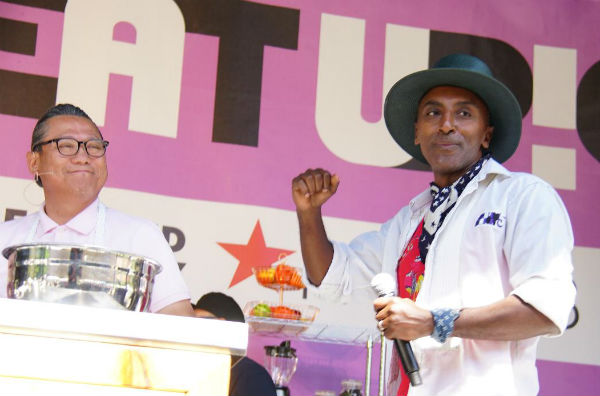 They will headline a one-hour fundraiser special entitled Harlem Serves Up! airing on ABC7 New York on July 18, starting at 7:00 pm, from Executive Producers Marcus Samuelsson and Herb Karlitz.

“Six years ago, we created Harlem EatUp!, a festival which shined a spotlight on an iconic community, its residents, small businesses and restaurants,” said Samuelsson, co-founder of the festival, who will also be participating in the program. “This year, given the pandemic and its disproportionate impact on communities of color, we repurposed our efforts to create this television and online fundraiser, to promote businesses in Harlem and to raise money for non-profits that serve Harlem, its residents in need, its businesses and the city of New York,” shared Karlitz, co-founder of Harlem EatUp!

Proceeds raised from the show will benefit Citymeals, World Central Kitchen, Harlem Park to Park and Uptown Grand Central. “This incredible evening would not be possible without our program’s sponsors, including Presenting Sponsor Humana, Barilla, Bank of America, and Con Edison,” shared Karlitz.

“We’re thrilled to be a part of a program that supports the Harlem community. We want to do our part so we’re matching donations up to $250,000.00 to address food insecurity,” added Julie Mascari, Humana’s Regional President of the Northeast.

“Lacking access to capital and critical business networks Black businesses were struggling to survive prior to the pandemic. Federal small business stimulus funding, the Payroll Protection Program (PPP), failed to reach many Harlem businesses. Those few businesses that received PPP funds found it woefully inadequate and the conditions for loan forgiveness difficult to meet. With a forecasted closure rate of 40% for Black owned businesses, we must do everything we can to save the precious few survivors,” Regina Smith, CEO of Harlem Business Alliance.

“Within the one hour show, we’re bringing you incredible cooking demos, musical performances, and into Harlem restaurant destinations like LoLo’s Seafood Shack, Charles’ Pan Fried Chicken, Miss Mamie’s Spoonbread Too and Settepani to hear firsthand how they have been affected by the pandemic and how viewers can help support them in these trying times,” said Melba Wilson of Melba’s Restaurant and President of NYC Hospitality Alliance.

To find out more and to donate, visit www.HarlemServesUp.com