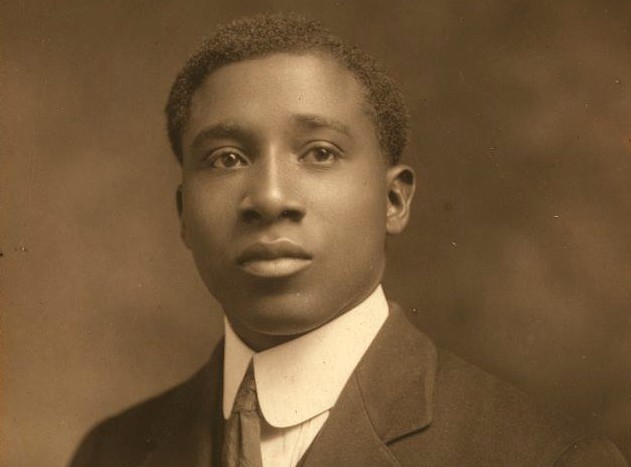 Having been on pause since the pandemic, Liz Player (Founding Executive and Artistic Director, Harlem Chamber Players) is pleased to announce the rare NYC performance.

The performance of the Harlem Renaissance composer Nathaniel Dett’s (1882-1943) masterpiece oratorio The Ordering of Moses, was cut short during a radio broadcast in 1937.

The Ordering of Moses will be presented for one night only, the weekend of Juneteenth, on Thursday, June 17th at 7:30 PM at The Riverside Church, 490 Riverside Drive in Harlem, NY.

Produced by Ms. Player and brought back to its original splendor, this epic performance includes a 60-piece orchestra from The Harlem Chamber Players, a 75-member choir composed of members from Chorale Le Chateau, and five Metropolitan Opera soloists.

The production is helmed by the conductor, music director and multifaceted artist Damien Sneed and is hosted by WQXR personality Terrance McKnight. The Ordering of Moses is part of the Harlem Renaissance Centennial.

General admission tickets priced at $25 are available online at https://harlemchamberplayers.ticketleap.com/the-ordering-of-moses/ or by calling ­­­­­­212-866-1492.

For its world premiere in 1937, The Ordering of Moses was broadcast nationally by NBC, making it among the first classical pieces written by an African-American composer to earn that distinction.

Due to “previous commitments,” the network cut the scheduled broadcast short by 10 minutes, believed by most to be the result of the network caving to complaints from racist listeners.

It was last performed in 2014 at Carnegie Hall.

This concert is dedicated to the memory of the legendary soprano Jessye Norman.

Sweeping in its scope and soul-stirring with its unmistakable infusion of spirituals into a traditional European form, R. Nathaniel Dett’s masterwork invokes the emancipation of African-American people through a re-telling of the Old Testament story.

The Ordering of Moses uses a distinct combination of scripture and folklore to recount the tale of Moses leading the Israelites out of bondage in Egypt and into liberation.

With Dett’s bold use of African-American thematic elements, weaving the spiritual “Go Down Moses” throughout a staunchly traditional form, this soaring work echoes the plight of slaves in America—from emancipation to Jim Crow to the Harlem Renaissance, and now, the ability to celebrate the liberation of Black creative voices 100 years later.

In addition to The Ordering of Moses, also on the bill for the evening are James Weldon Johnson’s “Lift Ev’ry Voice and Sing” in a world premiere arrangement by Damien Sneed, Bach’s “Herr Gott, dich loben wir” (“Lord God, Thy Praise We Sing”) and an additional surprise performance.

“After having to postpone this production for two years, I am excited to bring the Harlem Renaissance composer Nathaniel Dett’s oratorio The Ordering of Moses to our community. What I hope is that this story of Moses leading the Israelites out of Egypt after a series of plagues will foreshadow our own triumphant emergence from this pandemic” says producer Liz Player “I love that the spiritual  ‘Go Down, Moses’, which is also a message of Black liberation, is interwoven throughout the oratorio. This is especially timely after all we have endured during the past two years with the pandemic and the reckoning of anti-Black racism. As we approach Juneteenth, the second year of its being recognized as a national holiday, I hope this music uplifts and unites us all in celebration of Freedom Day for every single one of us.”

“Nathaniel Dett’s oratorio was composed in 1932 as monarchs and dictators were seizing power and committing genocide around the world. The piece is a meditation on the Moses in those of us who are willing to speak out against oppression wherever it is.” says concert host Terrance McKnight (WQXR Radio and Artistic Advisor to The Harlem Chamber Players). 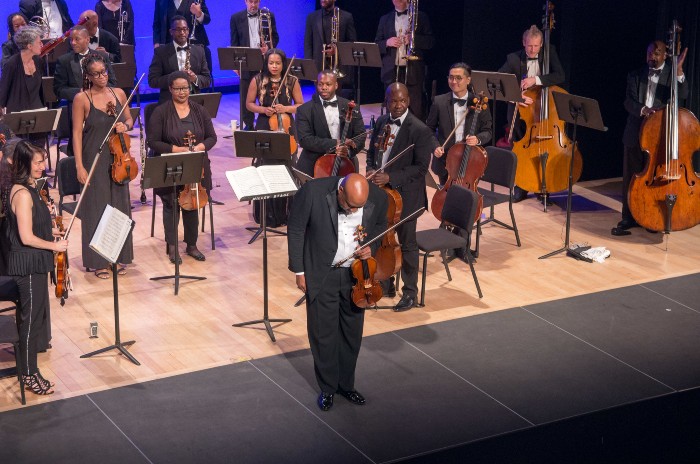 His ancestors were among the slaves who escaped to the North and settled in that slave-founded town.

Dett began studying piano in 1901, and was admitted just three years later to Oberlin Conservatory, where he majored in piano and composition.

Dett’s later education included studies at Harvard University under Arthur Foote (1920-21), and the American Conservatory in Fontainebleau with Nadia Boulanger.

In 1932, he completed a Master of Music degree at the Eastman School of Music in Rochester, NY. In the decades between, his most important work came as the choir director at the Hampton Institute in Hampton, VA, training the 40-voice Hampton Singers at the traditionally African-American school and becoming the first Black person to rise to Director of the Music Department.

The same year, he earned another first—the first Black person to be awarded an honorary Doctor of Music degree from Oberlin Conservatory.

Dett passed away in 1943 while serving as the choral director for the USO, supporting troops overseas during World War II.

As a composer, Dett published approximately 100 compositions, primarily for piano, voice, and choir.

His two major works, Chariot Jubilee and The Ordering of Moses, both use African-American spirituals as thematic material.

His legacy endures through his numerous arrangements of folk songs and spirituals, as well as collections of poems and essays, in which he warned about the danger of losing the real meaning of African-American music through commercialization.

He is a 2014 Sphinx Medal of Excellence recipient, a 2020 Dove Award winner, and a 2021 NAACP Image Award winner for his work as a featured producer and writer on the Clark Sisters’ recently released album The Return.

Sneed is currently a faculty member of the Manhattan School of Music and Artist-in-Residence at Michigan State University.

During the 2018-2019 season, he served as music director, composer in residence, and cover conductor for the staff of the Houston Grand Opera, who commissioned him to compose a new chamber opera about the life of Marian Anderson, Marian’s Song, which had its world premiere in 2020.

Other commissions include the original score for Testament, a contemporary response to the 60th Anniversary of Revelations, for Alvin Ailey Dance Theater’s first virtual season; and a chamber opera, The Tongue & The Lash, for Opera Theatre of Saint Louis in 2021.

He is currently commissioned to compose his fourth opera, a reimagined adaptation of Scott Joplin’s Treemonisha, which premieres May 20, 2023, to open OTSL’s season.

Brandie Inez Sutton (Soprano) has appeared in numerous productions with the Metropolitan Opera and most recently, appeared as La Fèe in Massenet’s Cendrillon, in addition to concert halls and on opera stages around the world.

She has performed as Gilda in Verdi’s Rigoletto with New York City Opera: and as Musetta in Puccini’s La Bohème with Seattle Opera.

Ms. Sutton has also been immortalized as a hologram in The Legacy Museum: From Slavery to Mass Incarceration located in Montgomery, AL.

A principal artist at the Metropolitan Opera for 8 seasons, Janinah recently released Love Color of Your Butterﬂy, an album from her record label ‘Clazz Records’ featuring innovative arrangements of Opera, Spirituals, Jazz, and More. Available everywhere!

Chauncey Packer (Tenor) is an exciting American tenor who has performed opera and concert works in such houses as the Metropolitan Opera, Teatro alla Scala, and Théâtre des Champs-Elysées.

First National Broadway tours include Porgy and Bess and Cinderella.

Upcoming roles include Cavaradossi (Tosca) and Jo the Loiterer (The Mother of Us All) with Chautauqua Opera and The Witch (Hansel and Gretel) with New Orleans Opera.

In the 2021/2022 seasons he made his Metropolitan Opera Debut as Lawyer Frazier in Porgy and Bess.

Kenneth has appeared as a soloist with the New York Philharmonic and will make his Kennedy Center Debut this spring as a soloist in Damien Geter’s An African American Requiem.

The Harlem Chamber Players, founded by Executive Director Liz Player,  is an ethnically diverse collective of professional musicians dedicated to bringing high-caliber, affordable, and accessible live classical music to people in the Harlem community and beyond.

In addition, The Harlem Chamber Players seek to build an audience for classical music in general through community and educational outreach, as well as through collaborations with Harlem’s other arts organizations, schools, and cultural institutions.

The Harlem Chamber Players not only bring live chamber music to underserved neighborhoods in the Harlem community but also create opportunities for classically trained musicians of color.

Chorale Le Chateau is a musical group developing a remarkable reputation for its vivid interpretations of vocal literature, from Renaissance vocal literature to jazz, spirituals, gospel, and avant-garde contemporary music.

Damien Sneed, the Artistic Director, and Founder selected each singer from his personal experiences as a performer, professor, and conductor over the past fifteen years.

Members hail from various parts of the world and come from various performing arts institutions and venues such as The Juilliard School, The Metropolitan Opera, Howard University, Yale University, The City University of New York, and many more.

Chorale Le Chateau is featured on the SONY Records recording of Wynton Marsalis’ Abyssinian Mass with the Jazz at Lincoln Center Orchestra and Wynton Marsalis.

Terrance McKnight weekday evening host for WQXR shares his commitment to humanity and music by “bringing everyone’s culture to the table, ensuring a place for all.” When not on-air, his endeavors include curating concerts, hosting events, and producing documentaries.

In 2019, McKnight curated a series of concerts and audio tours for the Charles White: A Retrospective exhibition at MOMA. Other subjects include Langston Hughes, Dr. Martin Luther King, Jr., Hazel Scott, and Harry Belafonte.

An artistic advisor for The Harlem Chamber Players and member of the Artistic Committee of The Hermitage Artist Retreat, he serves on the board of directors of the Bagby Foundation and MacDowell, is the voice of recent media campaigns for Carnegie Hall and the Studio Museum in Harlem and gave the keynote address for the diversity track of the spring 2022 Music Teachers National Association.

Terrance McKnight is the author of the book Concert Black, anticipating a 2022 release by Abrams Books.

This celebratory, community collaborative effort comprises over 30 Harlem cultural institutions that will spearhead the celebration and produce an extended series of programs, events, and cultural activities.

Harlem Renaissance 100 will showcase the artists of today while highlighting the artistic and creative energy and exuberance that became the nexus of African-American cultural identity and made Harlem a world-renowned community.

This project is funded by a Catalyst Grant from the Upper Manhattan Empowerment Zone (UMEZ), National Endowment for the Arts Challenge America, the M&T Charitable Foundation, the New York State Council on the Arts (NYSCA), the NYC Department of Cultural Affairs, the Howard Gilman Foundation, the Lily Auchincloss Foundation, the Bagby Foundation, West Harlem Development Corporation and Columbia Community Service.