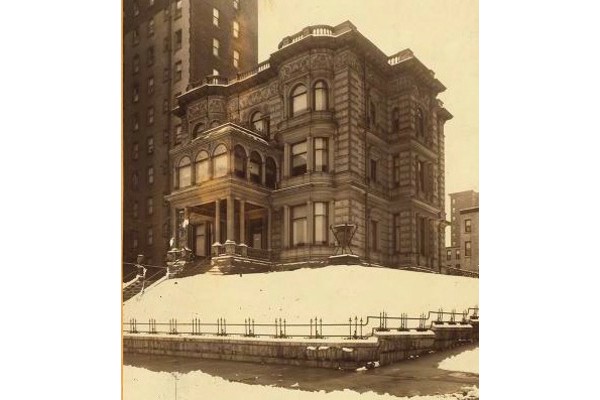 This is 310 Riverside Drive at 103rd Street in Harlem, NY, looking north from the top of the stairs next to the stone wall from 1879. It is winter in the 1920s, the path next to the train tracks was probably located just a little east of the promenade that is now over the tracks.

The park had a great deal of re-landscaping during the Westside Improvement Project and the tracks were covered, not moved.

The field to the west of the tracks is a landfill that will very soon be the West Side Highway, the ball fields, and the swing rings at Hudson beach.

This beautiful house, with it’s a glass-enclosed conservatory, was on 103rd street between West End Avenue and Riverside Drive.

It was owned by a family named Foster so it is often referred to as The Foster Mansion.

It was not until the late 1870’s that any serious work began on Riverside Drive.

Then there were the lawsuits. Some of the households along the stretch now called Riverside Drive owned or claimed to own the land, that extended way beyond the current lot lines.

Where the drive now sits was disputed land in many cases.