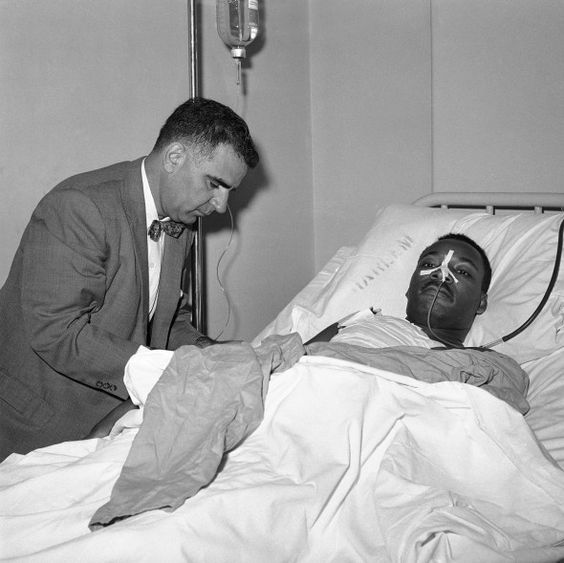 On September 20th, 1958, 29 year-old Dr. Martin Luther King Jr., was in Harlem autographing his book Stride Toward Freedom, about the Montgomery Alabama bus boycott in front of Blumstein’s Department Store on West 125th Street. A deranged woman, 42-year-old Isola Ware Curry, attacked Dr. King with a 7 inch steel letter opener, driving it so deeply into his chest that the tip of the opener rested on King’s aorta, the artery that carries blood from the heart to the rest of the body. Dr. King was rushed to Harlem Hospital where an esteemed team of doctors led by Dr. Aubre’ Maynard and including Dr. John Cortese and Dr. Emil Naclario and others successfully operated on Dr. King for 21/2 hours, removing the letter opener.

For the past 10 years, Harlem Hospital has honored the legacy of Dr. Martin Luther King Jr. and commemorated the near tragic event that has cemented their relationship forever. Many people vividly recall where they were and what they were doing the exact moment they heard that Dr. Martin Luther King Jr. was assassinated on April 4, 1968, while standing on the balcony of the Lorraine Motel in Memphis Tennessee. But many forget that Dr. King was nearly stabbed to death in 1958 while visiting New York City. Thanks to that team of gifted and dedicated doctors from Harlem Hospital, King would live on to tell America about a dream he had and become it’s most celebrated Civil Rights icon.

Touro College has a unique status in the saga of Dr. King for its current location was once home to Blumstein Department store, (Where Martin Luther King was attacked), a Harlem mainstay for decades had a checkered past for its discriminatory practices. How ironic that a facility that once nurtured Jim Crow is now a Center for Education, Enlightenment, and Healing.

Special Remarks and a dramatic re-enactment of the attack on Dr. King.

Special Remarks and a dramatic re-enactment of the team of Dr. saving Dr. King’s life and a screening of When Harlem Saved A King, a film by Rev. Alphonse Cohen.