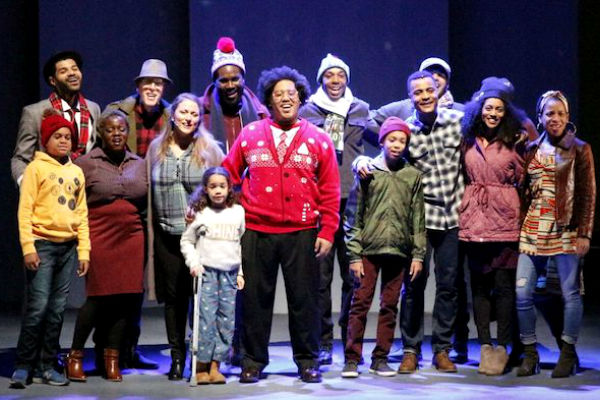 Set in present-day Harlem, this holiday treasure is dramatized with CTH’s signature style of infusing classic works with an uptown flair.

A Christmas Carol in Harlem places Ebenezer Scrooge as a real estate mogul who has made his fortune at the expense of others.

Scrooge foregoes using his wealth to affect positive change within his Harlem community and instead lives a life of miserly solitude.

That is, until three unexpected visitors arrive on Christmas Eve to show him that the value of family and the impact of cooperation will lead to a healthy, thriving, and prosperous community.

A Christmas Carol in Harlem touches on the issues that are affecting so many New Yorkers today such as gentrification and social inequality but infuses it with humor and hope.

CTH reinvigorates this timeless tale to remind us that taking the time to be sensitive and mindful is key to celebrating our shared humanity. CTH veteran, Charles Bernard Murray, will lead the cast as Ebenezer Scrooge.

The company of “A Christmas Carol in Harlem” includes: Charles Bernard Murray (as Scrooge; The Bacchae, Dreamgirls), Steve Greenstein (as Jacob Marley; POSE, Iron Fist, Guys and Dolls), Eryn Barnes (as The Ghost of Christmas Past; For Colored Girls who Considered Suicide/When the Rainbow is Enuf;), Andrei Pierre (as The Ghost of Christmas Present; The Bacchae), Kahlil X Daniel (as The Ghost of Christmas Future), Jeffrey Rashad (as Bob Cratchit), Ure Egbuho (as Sierra Jones; The Fre), Gabrielle Djenné (as Fan and Belle; The Snowy Day), Kenzie Ross(as Mrs. Cratchit; CONFEDERATES, Blood at the Root, When We Left), Angela Polite (as Clock Shop Lady; MARY SPEAKS, Flambeaux), Daniel Echevarria (as Fezz; In The Heights, Something like a Fairytale, The Open Gate), Paula Galloway (as Claudette; The Colored Museum, Ain’t Misbehavin’), Emery Jones (as Tiny Timothia), Reed Harris Butts (as Bennie), and Kaden Jones (as Tommy/Young Ebenezer). The ensemble features dancers from Elisa Monte Dance.

“Shawn René Graham has taken Dickens’ classic to show how a community is healed, one family at a time and exemplifies how ordinary people can do extraordinary things to help one another receive the gift of love at Christmas time,” says Ty Jones, Producing Artistic Director of The Classical Theatre of Harlem. “This timeless tale takes on a special meaning after the year that we have all had, and we are thrilled to be providing this production free of charge to the public to help lift spirits in time for the holidays.”

Carl Cofield directed several plays for CTH before joining as a staff member in 2018. Notable directing credits for CTH include the critically acclaimed productions of The Bacchae, Antigone, Macbeth, The Tempest and Dutchman. In addition, he directed the award-winning world premiere of One Night In Miami for Rogue Machine Theater and the Denver Center Theatre, A Raisin In the Sun for Two River Theater Company, The Mountaintop for Cleveland Play House, Disgraced for The Denver Center and Henry IV Part 2 for the Oregon Shakespeare Festival, A Midsummer Night’s Dream for NYU and Twelfth Night for Yale Rep. He holds an MFA from Columbia University. Mr. Cofield is on faculty at NYU and Columbia University.

Recommended for all ages and runtime is 90 minutes.

From our friends at Broadway World.