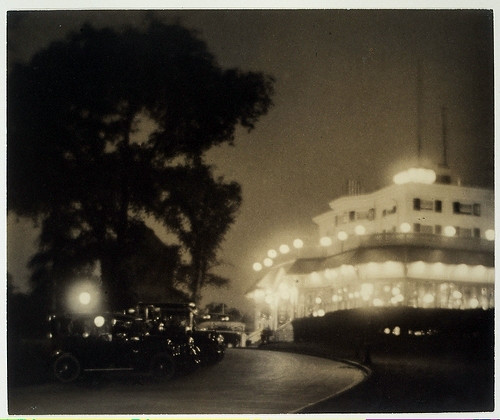 A spectacular night-time photograph looking south of the Claremont Hotel, located just a block north of Grant’s Tomb, was a legendary, Riverside venue (between 121st and 123rd Streets) for the well-to-do in its day in West Harlem, New York.

Originally built around 1775, it was said to be named after Lord Clives’s Palladian-style estate in Surrey, England. The Hotel catered to the glitterati of the city and country including President McKinley, Lillian Russell, Cole Porter, Admiral Dewey, President Taft, lots of  Vanderbilts and Astors and more. On the surrounding area at the time known as Claremont Hill, site of the Battle of Harlem Heights during the Revolutionary War.

Marjorie Cohen in the Westsiderag wrote that it all began with Michael Hogan, who made his fortune in shipping and was once the British Consul in Havana. Hogan bought up all of the land west of Bloomingdale Road (where Broadway is now) from 121st Street to 127th Street and in 1804  built a house on his parcel of land near the site of the battle of Harlem Heights.

There are two versions of why he named his house Claremont: first is that it was to honor his birthplace, County Clare in Ireland, and second  that it was named after the residence of Prince William, Duke of Clarence, later King William IV, a friend of Hogan’s from his days as a midshipman in the Royal Navy. Rumor had it that Hogan lived in his new house with an Indian Princess. Maybe.

In 1807 Lord Viscount Courtenay, who later became Duke of Devon, lived in the house and from its vantage point overlooking the river, he watched the trial run of Fulton’s Steamship, the Clermont. Courtenay decamped from the house not long afterwards, apparently “disturbed by events preceding the War of 1812.”

In 1815, Joseph Bonaparte, ex-King of Spain and Napoleon’s brother, moved in. It is speculated that he may have entertained Lafayette, Louis Phillipe and Talleyrand while he lived there. Bonaparte sold the house to Joel Post, a member of a prominent New York family and then, in 1842 or 43 it was bought to be converted to a road house.  In the 1870’s  it was acquired by the city as part of Riverside Park.

People traveling by carriage from downtown to the “country” further north would stop at the Claremont for refreshment and a panoramic view of the Hudson from the heights. According to an article in The Evening World, January 15, 1920, “In the days when the city was young, Claremont was a rendezvous for equestrians who would pause on their morning or afternoon gallop for a ‘nip from the wood’. …Statesmen in their frock coats slapped uniformed shoulders and had theirs slapped in return. Art critics admired the collection of Sadler’s etchings [popular renderings of domestic scenes of old England] with which the rooms are hung, and collectors of antiques went green with envy at chinas occupying a place on high in the breakfast room.”

The glory days of the Inn were from the mid 19th century until the 1920’s.  R.A. Gushee, proprietor of the Inn from the 1890’s to 1920 who lived with his family in the top two floors of the Inn, told a reporter that you could “take the list of Whos’ Who in American for the last thirty years and you’ll find nearly all have been here.”  Gushee recounted tales of a grand luncheon in 1897 with 400 guests in honor of President McKinley and a breakfast two years later  for Admiral George Dewey, the hero of Manila Bay and the toast of the nation for his “deathless” victory in the first major engagement of the Spanish-American War. (The only person who died in that battle was the Chief Engineer who succumbed to a heart attack.)

President William H. Taft was feted at a luncheon at the Claremont right after he delivered a Memorial Day address at Grant’s Tomb which was completed in 1897 just south of the Claremont.  Taft had his own chair at the Inn, built especially to accommodate “his portly person.”

A beautifully illustrated promotional pamphlet for the Inn that dates from 1907 describes the vista from the Inn: “The gardens of Claremont are the pride of the city. …Turn where you will, the picture is never twice alike; …beautiful…..particularly in the late afternoon as the sun sinks behind the Palisades.. Claremont by night is, if possible, more beautiful than by day. The garden is not garishly lighted by electricity… [here you will see] well-gowned women, the beauty of whose costumes is further emphasized by the sober black and white evening dress of the men.”

Related:  Psychological Preparation Of The Child For The Exam Tips

A writer for the New York Herald, also in the summer of 1907, wrote about the Claremont as a popular stopping place for people making automobile trips. He described it as a mecca for professional and business men who couldn’t tear themselves away from town but still wanted to dine in a cool spot. But, he explained, the cost of dining at the Inn was steep. Montreal melons that were shipped in every day in summer cost 75 cents a slice; the planked steak was $5.  He quotes one patron as calling it the Hysteric Claremont rather than the Historic Claremont when he receives his bill. But he says he’ll come back because the high cost of a meal “helps pay to keep the noisy fun lovers away from the resort famed for its age, its colonial history, its beauty and its supper rooms.”

In 1920, it is Gushee who bemoans the fate of the venerable Inn in the Evening World article and blames it on Prohibition. The reporter interviewing him waxes poetic: “Though Claremont withstood the Battle of Harlem Heights, it has succumbed to the heavy gunfire of Prohibition, for without that which makes the heart muckle [that means large], there is no gladness and there is no revenue.” Thus, in 1920, the Gushees ended their lease of the  property for which they were paying the city $20,000 per year.

Fast forward to May 30, 1934: The Claremont rises again! But this time not as a “recherche dining spot known as the most expensive restaurant in town.” Instead, it is re-invented as a more reasonably priced restaurant championed by the people’s mayor, Fiorello LaGuardia, and overseen by his Parks Commissioner, Robert Moses.

According to a New York Times article of that date (at right), although rain marred the re-opening of the Inn, driving 600 people from the Terrace to join another 600 inside, the “throng was gay but orderly.” Opening night featured a four-course $1.50 dinner menu with choices including crabmeat cocktail, chicken gumbo southern style, roast sirloin of beef with mushroom sauce, and a fresh strawberry tartlette. Beer was 10 cents a glass but most guests drank wine and some even drank champagne. There was dancing to a full orchestra late into the night. A far cry from the $5 planked steak in 1907!

An article in the Sun in 1941 reported that the Inn was doing well and that it had survived its transition to a moderately priced venue although it was only open from spring until fall. Its chief threat at that time was rain.

Part of the Historical Society’s collection of hotel memorabilia, a promotional letter from the Banquet Department written in 1942 invites  readers to consider the Inn as the site for their organization’s next affair, offering lunch or dinner in country club surroundings, a commanding view or the Hudson, ample parking, outdoor gardens and and glass-enclosed verandas, dancing nightly and moderate prices ranging from 50 cents for a tea, $1 for a luncheon, $1.50 for dinner and $1 for a late supper.

At one point in the early 40’s, the Claremont became so popular that neighbors complained about “sounds unholy” coming from the Inn, and an 11 pm curfew was put in place.

In the late 40’s, the popularity of the Inn plummeted and it became clear that the end was near. In 1951, as the demolition of the building by the city was beginning, a fire started when the coals of a watchman’s hand-warming barrel ignited the old structure.  The little that was left was torn down. Now there is a playground on the Inn’s former site, and all that is left to remind visitors of its glittering past is a commemorative plaque placed there by the Parks Department in 1952.

The building burned down in 1950 and was replaced by the Claremont Playground.

The film noir like image above was taken by New York City born photographer Karl Struss in 1915.