The Cathedral Of St. John the Divine Welcomes Back A Holiday Tradition With “Joy Of Christmas” Concert In Harlem 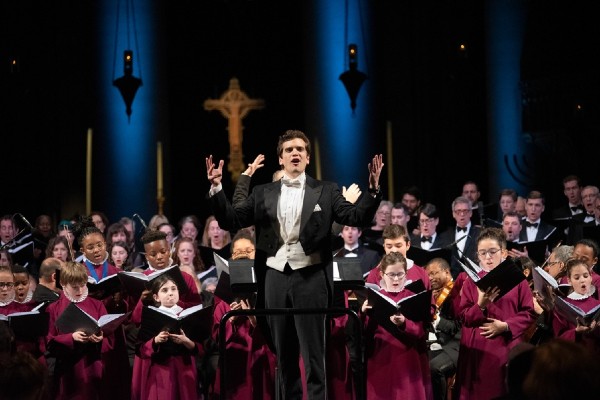 The Cathedral of St. John the Divine celebrates the holiday season with Joy of Christmas, part of the 2021-2022 season of Great Music in a Great Space concert in Harlem.

Christmas at the Cathedral is a joyful time, and this year the Cathedral welcomes back audiences and friends for in-person music and festivity. As the past two years have shown, the magic of sharing beloved traditions with one another has the power to touch the heart and spirit.

This year, the Cathedral Choirs, orchestra, and soloists, under the batons of Director of Cathedral Music Kent Tritle and Associate Choirmaster Bryan Zaros, will celebrate the holidays with Benjamin Britten’s beloved Ceremony of Carols, Antonio Vivaldi’s incandescent Gloria, and favorite carols were sung by the whole audience.

All visitors to the Cathedral are required to show proof of COVID-19 vaccination and wear a mask for entry.

For tickets and more information on Joy of Christmas, visit the Cathedral’s website.

Kent Tritle is one of America’s leading choral conductors. Called “the brightest star in New York’s choral music world” by The New York Times, Kent is Director of Cathedral Music and Organist at the Cathedral of St. John the Divine in New York City and Music Director of the Oratorio Society of New York.

In addition, he is marking his 15th season as Musica Sacra Music Director and is Director of Choral Activities at the Manhattan School of Music.

Kent Tritle founded the Sacred Music in a Sacred Space series at the Church of St. Ignatius Loyola, leading its choir and orchestra in 150 concerts from 1989 to 2011.

From 1996 to 2004, Tritle was Music Director of the Emmy-nominated Dessoff Choirs. Kent hosted “The Choral Mix with Kent Tritle,” a weekly program devoted to the vibrant world of choral music, on New York’s WQXR from 2010 to 2014.

Recent releases, including the Grammy-nominated 2018 world premiere performance of the Paul Moravec/ Mark Campbell oratorioSanctuary Road with the Oratorio Society of New York; the 2016 performance of Mahler’s Symphony No. 8, David Briggs’s organ-choral version; and Eternal Reflections: Choral Music of Robert Paterson with Musica Sacra, have been praised by NPR Music, Gramophone, and The American Organist.

Kent is the 2020 recipient of Chorus America’s Michael Korn Founders Award for Development of the Professional Choral Art.

Other recent honors include the 2017 Distinguished Achievement Award from Career Bridges and the 2016 President’s Medal for Distinguished Service from the Manhattan School of Music.

Kent is on the advisory boards of the Choral Composer/Conductor Collective (C4) and the Clarion Music Society, and was the 2016 honoree at Clarion’s annual gala.

Kent Tritle holds graduate and undergraduate degrees from The Juilliard School in organ performance and choral conducting. He has been featured on ABC World News Tonight, National Public Radio, and Minnesota Public Radio, as well as in The New York Times and The Wall Street Journal.

He was featured in Episode 6 of the first season of the WIRED video series “Masterminds,” an installment titled “What Conductors Are Really Doing.”

Bryan Zaros is a young American conductor recognized for his “strong musical imagination” and “deep sense of musicality and communication.”

He is the Associate Choirmaster at the Cathedral of Saint John the Divine and made his conducting debut with the Cathedral Choirs at Westminster Abbey, London.

A native New Yorker, Zaros began his professional musical training as a member of the Metropolitan Opera Children’s Chorus and as a boy chorister at The Church of the Transfiguration, NYC.

He is the Music Director of the Pro Arte Chorale, an ensemble with a 55-year legacy specializing in the performance of choral/orchestral masterworks, and is a frequent guest lecturer at the Manhattan School of Music and at music conferences throughout the USA.

He received a Bachelor of Music in Sacred Music from Westminster Choir College and a Master of Music in Conducting from the University of Michigan. He is currently a candidate for the Doctor of Musical Arts degree in Conducting at the Manhattan School of Music.

He is a recipient of several conducting awards including an American Prize award in Conducting. For more information about Bryan, visit www.bryanzaros.com.

Of Halley Gilbert’s Zerbinetta in Utopia Opera’s production of Ariadne auf Naxos, James Jorden of the New York Observer wrote: “Stealing the show was Halley Gilbert as Zerbinetta, flinging out crystalline trills, arpeggios, staccati and roulades…Ms. Gilbert’s frankness…made the text sound like it could have been written yesterday.”

Other roles include Ms. Wordsworth (Albert Herring), Queen of the Night (Die Zauberflӧte), Chlorinda (Cenerentola) and Frasquita (Carmen). Ms. Gilbert has been a featured soloist with the Great Music in a Great Space Concert Series, Greenwich Symphony Orchestra, Rochester Philharmonic, Lake Placid Sinfonietta, and Bronx Arts Ensemble among others.

She received first prize in both Opera Idol NYC 2012 and the Jenny Lind Competition for Sopranos in 2011 and was a Regional Finalist in the Metropolitan Opera National Council Auditions.

Katie Geissinger, mezzo-soprano, enjoys singing music of many eras and styles. Her performances have been characterized as “dazzling” by Prague Culture, “exquisite” by Die Welt, and “spellbinding” by the Washington Post.

Favorite solo engagements include Bach’s Mass in B Minor, Monteverdi’s Vespers of 1610, Pärt’s Stabat Mater, Handel’s Belshazzar, and the concert and recording of Four Quarters of Jerusalem by the Cathedral Choir with Rose of the Compass.

She has appeared at Carnegie Hall as the Witch of Endor in Honegger’s Le Roi David with the Oratorio Society of New York, and in Bach’s Magnificat.

Katie has toured extensively with Meredith Monk in concerts and theatrical pieces, and recently premiered Indra’s Net in Oakland, CA.

Other Monk premieres include Weave with the St. Louis Symphony and Realm Variations with the San Francisco Symphony.

Katie is the recipient of a BESSIE for her work with Monk. Other credits include Philip Glass and Robert Wilson’s Einstein on the Beach (Elektra Nonesuch), Bang on a Can/Ridge Theater’s OBIE-winning The Carbon Copy Building (Cantaloupe), and Julia Wolfe’s Steel Hammer.

She has served on the faculty of the Bang on a Can Summer Institute at MassMoCA, where she performed Steve Reich’s Music for Eighteen Musicians. Katie has also appeared on Broadway, in Baz Luhrmann’s La Boheme, and in Coram Boy.

Upcoming performances include the Big Ears Festival (Knoxville), London, and the Hague with the Bang on a Can All-Stars, and Champaign-Urbana, Italy, France, and Luxembourg in Cellular Songs with Meredith Monk.

Revived in 2011, Great Music in a Great Space reprises the legendary concert series first held at the Cathedral in the 1980s.

Concerts take place in many locations: the vast space of the Crossing, the more intimate setting of the Great Choir, and the exquisite Chapels of the Tongues.

The beloved holiday traditions of the Christmas Concert and New Year’s Eve Concert for Peace are an integral part of our concert series.

During the COVID-19 pandemic, the Cathedral has responded to changing needs in the local community and across the city and state.

People from many faiths and communities worship together in daily services held online and in person; the soup kitchen serves roughly 50,000 meals annually; social service outreach has an increasingly varied roster of programs to safely provide resources and aid to the hardest-hit New Yorkers; the distinguished Cathedral School prepares young students to be future leaders; Advancing the Community of Tomorrow, the