The Cathedral Of St. John The Divine Presents Fantasias And Carols For The Holidays In Harlem 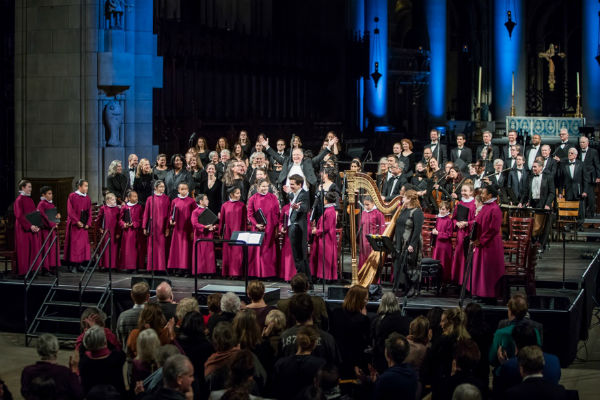 The Cathedral of St. John the Divine presents Fantasias and Carols: A Cathedral Christmas on Saturday, December 14 at 7 p.m. at the Cathedral of St. John the Divine, 1047 Amsterdam Avenue (at 112th Street), Manhattan. The Cathedral Choirs will join forces under the leadership of Kent Tritle, Director of Cathedral Music and one of America’s leading choral conductors, and Bryan Zaros, Associate Choirmaster. This signature event is one of many comprising the 2019–2020 season of Great Music in a Great Space.

The annual Christmas concert, a beloved holiday tradition, this year includes music by Giovanni Gabrieli as well as Ralph Vaughan William’s Fantasia on Christmas Carols, featuring baritone soloist Gregory Purnhagen. The Cathedral Choristers will perform works by Benjamin Britten, John Rutter, and David Wilcocks, Donald Fraser, and Marcel Dupré, among others. The whole audience is warmly invited to join in singing favorite Christmas carols, led by the choirs and orchestra!

“Tomorrow Shall be My Dancing Day”

“This Little Babe” and “Deo Gratias” from A Ceremony of Carols

Revived in 2011, Great Music in a Great Space reprises the legendary concert series first held at the Cathedral in the 1980s. Great Music in a Great Space presents choral, orchestral, and organ music, in the magnificent, deeply spiritual setting of the world’s largest Gothic cathedral. Concerts take place in many locations: the vast space of the Crossing, the more intimate setting of the Great Choir, and the exquisite Chapels of the Tongues. The beloved holiday traditions of the Christmas Concert and New Year’s Eve Concert for Peace are an integral part of our concert series.

Kent Tritle is one of America’s leading choral conductors. Called “the brightest star in New York’s choral music world” by the New York Times, Tritle is in his seventh season as Director of Cathedral Music and organist at New York’s Cathedral Church of Saint John the Divine. He is also Music Director of the Oratorio Society of New York and of Musica Sacra. He is Director of Choral Activities and Chair of the Organ Department at the Manhattan School of Music and on the graduate faculty of the Juilliard School. He is organist of the New York Philharmonic and the American Symphony Orchestra.

Tritle holds graduate and undergraduate degrees from the Juilliard School in organ performance and choral conducting. He has been featured on ABC’s World News Tonight and on National Public Radio and Minnesota Public Radio, as well as in the New York Times and the Wall Street Journal.

Bryan Zaros is a young American conductor recognized for his “strong musical imagination” and “deep sense of musicality and communication.” A native New Yorker, Zaros began his professional musical training as a member of the Metropolitan Opera Children’s Chorus and as a boy chorister at The Church of the Transfiguration, NYC. He is the Music Director of the Pro Arte Chorale, an ensemble with a 55-year legacy specializing in the performance of choral/orchestral masterworks. He received a Bachelor of Music in Sacred Music from Westminster Choir College and a Master of Music in Conducting from the University of Michigan. He is currently a candidate for the Doctor of Musical Arts degree in Conducting at the Manhattan School of Music. Zaros began his tenure as the Associate Choirmaster at the Cathedral of Saint John the Divine in August 2016 and made his conducting debut with the Cathedral’s Choirs at Westminster Abbey, London. For more information about Bryan, visit www.bryanzaros.com.

Raymond Nagem completed his D.M.A. at The Juilliard School in May 2016, where he was a student of Paul Jacobs. Dr. Nagem is a native of Medford, MA, where he attended the Boston Archdiocesan Choir School and began to study the organ with John Dunn. He earned his B. A. from Yale University in 2009, where he was a double major in Music and Psychology, and studied the organ with Thomas Murray, and his M.A. in 2011 from Juilliard.

He has worked since 2010 at St. John the Divine, where he has primary responsibility for service playing and choral accompaniment and works regularly with the cathedral’s several choral ensembles. In addition to these duties, he performs frequently in recital both in New York and across the country. His debut CD, Divine Splendor, recorded at St. John the Divine, was released on the Pro Organo label in 2014.

The Cathedral of St. John the Divine is the Cathedral of the Episcopal Diocese of New York. It is chartered as a house of prayer for all people and a unifying center of intellectual light and leadership. People from many faiths and communities worship together in services held more than 30 times a week; the soup kitchen serves roughly 25,000 meals annually; social service outreach has an increasingly varied roster of programs; the distinguished Cathedral School prepares young students to be future leaders; Adults and Children in Trust, the renowned preschool, afterschool and summer program, offers diverse educational and nurturing experiences; the outstanding Textile Conservation Lab preserves world treasures; concerts, exhibitions, performances and civic gatherings allow conversation, celebration, reflection and remembrance—such is the joyfully busy life of this beloved and venerated Cathedral.

Tickets are $50 (general admission) and $75 (reserved). Student rush tickets are available at the door for $15. For more information or to purchase tickets, please visit https://www.stjohndivine.org/calendar/29431/fantasias-and-carols-a-cathedral-christmas.

The Cathedral is open 7 days a week from 7:30 a.m. to 6:00 p.m. Please visit stjohndivine.org for more information and a schedule of public programs.