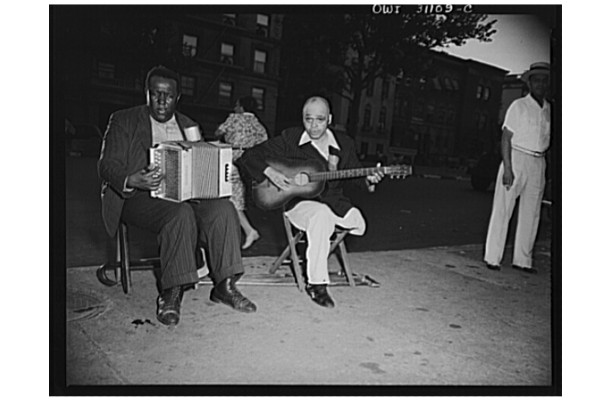 We are not sure where this fantastic photograph of these two street musicians was taken in Harlem, New York, June, 1943.

It’s a great photograph that documents a small moment in time in Harlem that might otherwise not have been photographed.

In the photograph, the people surround the musicians, one is an accordion player who is blind sitting next to a guitar player who has one leg (with his crunch underneath his chair) on a dark street in Harlem.

The two musicians are sandwiched between a woman dancing in the street behind them, the man in an white shirt and pants, straw hat to the right as photographer Roger Smith, who catches this moment in time.

A time where licenses were needed when events in the streets, local musicians playing on the sidewalks, and other community experiences were the norms of the day.

Related: Check out our Harlem History page on Facebook.

These two street musicians play their music as the crowd as they listen while some folks dance in the street.