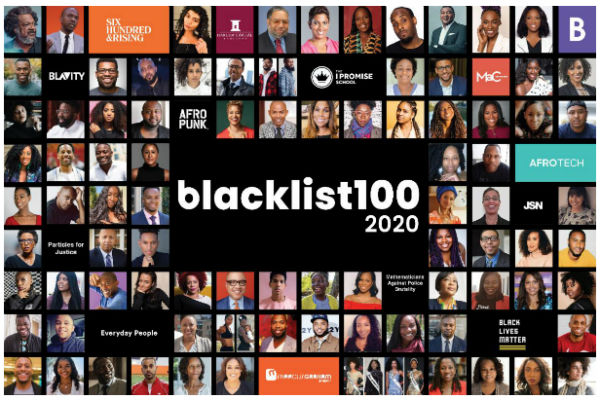 Following the recent launch of the Juneteenth Image Capsule (JIC) campaign – a future-forward, all-digital movement designed to comprehensively celebrate Black culture and Blackness – the next phase of the JIC initiative will continue with the release of the inaugural blacklist100. Curated by media executive, author, Columbia University lecturer, and JIC creator Kai D. Wright, the blacklist100 is a unique digital book spotlighting and celebrating 100 Black culture-makers and thought-leaders across various industries from Harlem to Hollywood.

The blacklist100 was created to amplify emerging voices within the Black community representing bold, innovative, and culture-making thought-leadership. This inaugural list contains 49 females, 36 males, and 15 teams, all hailing from the African Diaspora including, but not limited to: the United States, Haiti, Ethiopia, and the West Indies, to name a few, with individuals being recognized in five categories including:

Go beyond celebrating these individuals. The celebration is not enough. Starting today, share their profiles within your organization or network & immediately contact them to hire them….. to advise you, your team or organization through a virtual talk/event, to keynote programming for conferences, to serve in your influencer relations efforts, to fill your candidate pipelines, to serve as career/personal coaches, to collaborate in creative campaigns (from the beginning), to discuss trends and lessons, to train & teach others a new skill, and most importantly, to catalyze your commitments to change.

Whatever your business need, these 100 experts represent a starting point for action. Use this guide regularly as go-to-resource, join the online blacklist100 community, and keep telling others about Black talent on your radar. Knowledge is power. 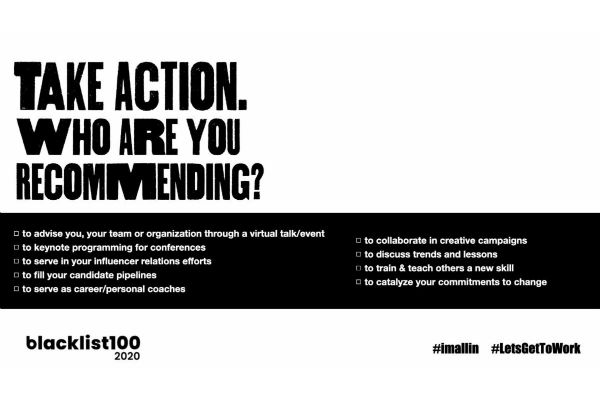 A Call for Change

The idea for the blacklist100 originated as a post on LinkedIn the week following the death of George Floyd. The post included an eight-page document entitled an “Open Letter on Race.” The letter was also released as a 25-minute video. The letter centered around a reflection on Dr. Martin Luther King’s critical question: “Where do we go from here?” Leading into the week of Juneteenth, the Open Letter on Race received over 30,000 views, shares, and engagements. Inspired by the idea of carrying the celebration of Blackness beyond Juneteenth and expanding on it event further, Wright created JIC and, specifically the blacklist100, to provide a platform for current culture makers in Black America with the thought that these individuals should be invited to virtual & physical stages to share their research, work, and point of view that has influenced and will continue to impact culture.

The central theme of the book is “A Call for Change” in which these change agents are answering 10 calls-to-action:

The featured artwork underpinning this book is from the 2020 Juneteenth Image Capsule of five works by Harlem-based painter & visual artist Elizabeth Colomba, who is French-born & raised and of Martinique-descent.

For more information on the blacklist100, to see the complete 2020 list, to get the 170-page e-book resource, and to start sharing their profiles with one-click to email/socials, please visit: www.blacklist100.com.

Read more about the blacklist100 digital initiative from the former Forbes 30 under 30 honoree on their Website here.