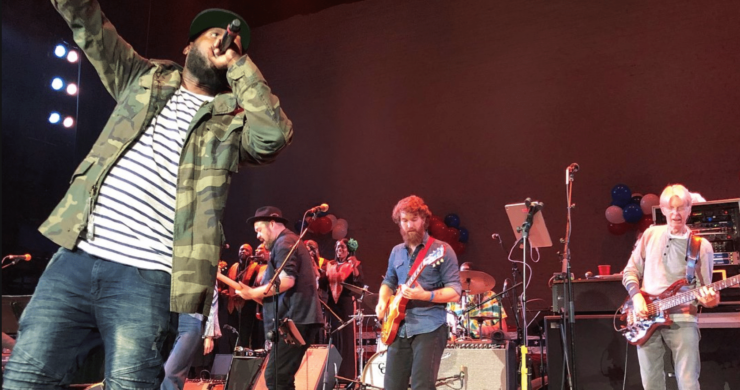 The event, billed as “Don’t Tell Me This Country Ain’t Got No Heart: A Benefit for Voter Participation,” saw Lesh team with touring outfit The Terrapin Family Band, guitarist Eric Krasno, and vocalist Nicki Bluhm for the entirety of the performance, as he had throughout his brief New York run this past week. However, in the spirit of the evening’s venue—a longtime cultural institution in the Harlem community and the city as a whole—the band also welcomed sacred steel guitar master Robert Randolph, rapper Talib Kweli, and Harlem Gospel Choir to give the performance an appropriate shot of soul.

Here’s the video where you can watch fan-shot video of Talib Kweli’s “Shakedown Street” freestyle and “Get By” featuring the Harlem Gospel Choir below:

On this night, seemingly every aspect of the celebration was of notable significance. The show was webcast live, so fans around the country could watch the performance and share in its message of rallying the masses to get out the vote. It marked the first time ever that a member of the Grateful Dead had played the storied room. It took place on promoter Peter Shapiro‘s birthday, prompting the band to open set two with a sing-along “Happy Birthday” in his honor. The performance itself also exuded on-topic political and societal overtones, from the band’s rocking first-set cover of Neil Young protest hymn “Ohio” to its extended second-set “Throwing Stones” and joyful set-closing plea for love, “Turn On Your Lovelight”.

However, on an evening packed with storylines, none stood out more than the late-show appearance by Talib Kweli. The Brooklyn-native rapper made his entrance as the band was already wading deep in the waters of a “Shakedown Street” jam, unleashing a conscious freestyle over the disco Dead groove. After finishing out the song, the Harlem Gospel Choir made their way onstage in full church-ready regalia. As they did, keyboardist Jason Crosby began to play the recognizable piano intro to Talib Kweli’s 2003 hit, “Get By”. The rest of the band followed suit, and just like that, the show went from “Shakedown Street” to the city streets—with Phil Lesh and his cohorts serving as the backing band for the world-class MC. As Talib finally exited, the crowd roared with approval, stunned at having witnessed the worlds of hip-hop, gospel, and The Grateful Dead come together on such a hallowed stage, in support of HeadCount’s unifying message: VOTE.