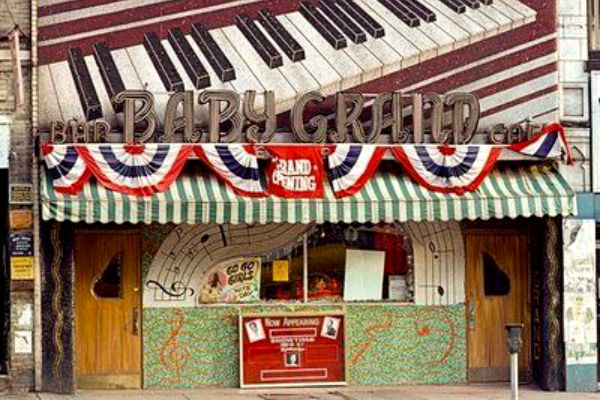 The Baby Grand Bar at 319 West 125th Street (between St. Nicholas and 8th avenue), opened in 1953, it was a saloon with a bright mural of a piano above the door and a rich Art Deco décor.

The Baby Grand was owned and operated by Vivian Brown, who had been a Cotton Club dancer, along with her twin sister. Ms. Brown was also the mother of present-day trumpeter and educator Eddie Henderson.

The Baby Grand, The Silver Rail, and the Palm Cafe were the hottest bars in the area. The Baby Grand had some of the hottest talent in Harlem performing at the salon, singer Big Maybelle, Nipsey Russell, The Wanderers, Etta James, The Dell-Tones, Charlie Mingus, Jimmy Smith, Eddie Fisher, Kenny Clarke, Willie Bryant (the unofficial mayor of Harlem), Charlie Parker, Horace Silver and many more.

In 1955, Horace Silver played with Charlie Parker. Silver remembers how it all happened, “Walter Bishop was sick and couldn’t make it, and the others were Charlie Mingus and Kenny Clarke”–and Bird sat in a couple of times with the pianist’s quartet that featured Mobley. Silver also sat in with Parker. “Walter Bishop asked me if I wanted to play, and I told him yeah. Miles also sat in, so did Gerry Mulligan. That was a helluva set.”

Another night, Ralph Cooper called up Nipsy Russell, the M.C. at the Baby Grand and arranged for Jimmy Scott to get a one week booking. Jimmy sang that one week and they kept him on for 3 more months! Billie Holiday would show up nightly while in town to listen to Jimmy.

Related:  Why Small Businesses Should Start Their Own Magazine To Enhance Sales

Musician Eddie Gale said, “People like Jackie McLean, Max Roach, Sonny Rollins, Cecil Payne and Randy Weston were in the neighborhood. Bud Powell lived around the corner from me. I used to go out as a kid to shine shoes and see movie stars coming through the Baby Grand Club. That was where I first saw Lena Horne and Louis Armstrong.

It was while singing at The Baby Grand that Capitol Records producer Dave Cavanaugh discovered Dakota Staton and signed her to the label.

It eventually became the King Party Center in the 1960’s, a Korean-owned shop, and now houses a Radio Shack (rumor has it that the original walls still exist).