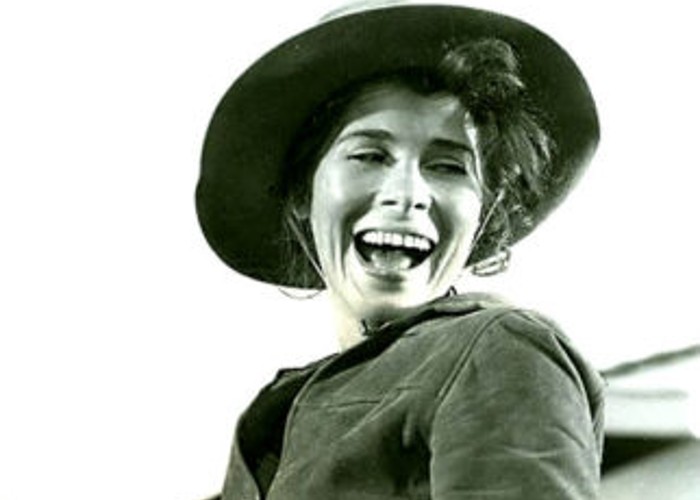 Joan Ann Hackett, March 1, 1934 – October 8, 1983, was an American actress of film, stage and television. She was nominated for the BAFTA Award for Best Foreign Actress for the 1966 film The Group, and starred in the 1967 western Will Penny.

She also starred as Christine Mannon in the 1978 PBS miniseries version of Mourning Becomes Electra.

She was born in East Harlem, New York, the daughter of Mary (née Esposito); and John Hackett.

She had a sister, Theresa and a brother, John. Her mother was from Naples, Italy and her father had Irish ancestry, and they reared her Roman Catholic and sent her to Catholic schools.

Her mother was from Naples, Italy and her father had Irish ancestry, and they reared her Roman Catholic and sent her to Catholic schools.

Hackett debuted in 1959 with the role of Gail Prentiss in the television series, Young Doctor Malone.

In 1961 she won a Theatre World Award, an Obie Award for Best Actress, and a Drama Desk Award for her Off-Broadway portrayal of Chris in Michael Shurtleff’s play Call Me By My Rightful Name.

She had a recurring role on the CBS legal drama The Defenders (1961–1965) as the fiancee of Kenneth Preston (played by Robert Reed), partner in the father-and-son law firm led by patriarch Lawrence Preston (E.G. Marshall).

She appeared regularly in scenes with both lead actors. She had a leading role in The Twilight Zone episode “A Piano in the House”.

In the 1963-1964 season, she guest-starred on the ABC drama about college life, Channing starring Jason Evers and Henry Jones.

Hackett had one of the starring roles in the 1966 Sidney Lumet film The Group, along with Candice Bergen, Larry Hagman, Richard Mulligan, Joanna Pettet and others.

One of her notable movie performances was the role of Catherine Allen, a young mother struggling to survive on the frontier, in the 1968 Western Will Penny, with Charlton Heston in the title role.

Hackett also had notable parts in the classic Western comedy Support Your Local Sheriff!, with James Garner, and the 1973 murder mystery The Last of Sheila. After this she primarily had parts in TV movies and on episodes of TV series.

In 1978, she appeared in a PBS adaptation of Mourning Becomes Electra as Christine Mannon; her performance earned her some of the best reviews of her career.

Clive James said that it entitled her to be called a great actress. The same year, she was a regular in the cast of the short-lived CBS situation comedy Another Day, portraying Ginny Gardner.

She appeared in the September 22, 1979 episode, Grass is Always Greener, of The Love Boat as Julie McCoy’s former classmate from the line’s cruise director course.

She could also be seen in Paul Simon’s film One Trick Pony.

From 1966 to 1973 she was married to actor Richard Mulligan, who also appeared in The Group.

Hackett was diagnosed with cancer in 1983. She died of ovarian cancer on October 8, 1983 at Encino Hospital in Encino, California. Both of her parents and her former husband Richard Mulligan also died of cancer.

Her remains are interred at Hollywood Forever Cemetery, where her epitaph reads “Go Away — I’m Asleep”.