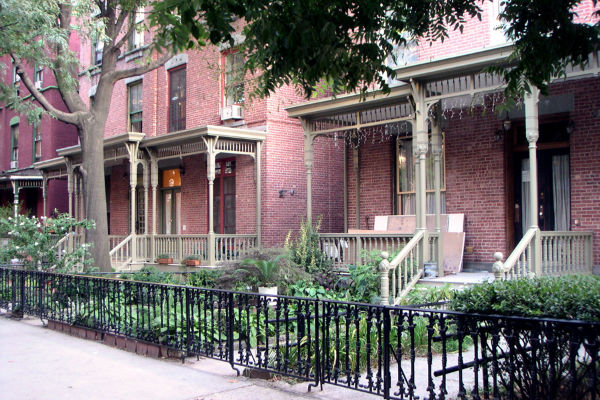 Astor Row is the name given to 130th Street between Fifth Avenue and Lenox Avenue in Harlem.

More specifically, it refers to the semi-attached row houses on the south side of the street.

These were among the first speculative townhouses built in Harlem, and their design is very unusual.

The houses are set back from the street and all have front yards, an oddity in Manhattan, and all have wooden porches.

The effect is southern, and has been compared to the appearance of parts of Savannah, Georgia.

The houses were built on land that had been purchased by John Jacob Astor in 1844 for $10,000, but the development was driven by his grandson, William Backhouse Astor, who hired architect and builder Charles Buek to oversee the project. The houses were all built between 1880 and 1883.

Ownership stayed in the Astor family until 1911, when the westernmost ten of the houses were sold to real estate investor Max Marx, who traded them in part for an apartment building in Washington Heights.

The new owners, the Brown Realty Company, defaulted on their mortgage and the houses passed to the New York Savings Bank.

The Astor Row townhouses rented originally for $1,100 per year, and were so popular that there was for years a waiting list to live there.

The Astor Row townhouses were occupied originally by whites, but in 1920, 20 of the 28 Buek houses (the ten owned by New York Savings Bank, plus ten still owned by the Astors) were purchased by a real estate operator named James Cruikshank and leased to black tenants.

The houses were not maintained as Harlem decayed from 1930 – 1990, and the porches were gradually lost. In 1978, the second edition of the AIA Guide to New York City described the row as having “restrained beauty which has been tarnished by years of economic distress.”

In 1981, New York City declared the entire row to be landmarks and raised funds to restore their facades, and improve their plumbing, heating systems, and electrical lines where needed.

In 1992, Ella Fitzgerald performed at a benefit at Radio City Music Hall to raise money for the restoration.

By the end of the 1990s, the porches and other decorative elements had been restored to almost all the buildings on the block.

In August 2009, the New York Times would write “the block is at the center of an intense but, as yet, the unfinished revival of the surrounding streets in Central Harlem.”

The houses on the north side of the street are large, attractive brownstones of a more common design.

In 1932, Father Divine, leader of Father Divine’s International Peace Mission Movement, lived on the north side of Astor Row.

Today, Astor Row is racially integrated and is one of the stellar architectural landmarks in Harlem. It is located near Sylvia’s Restaurant of Harlem, the Mt. Moriah Baptist Church, the former home of Langston Hughes, and other Harlem landmarks.